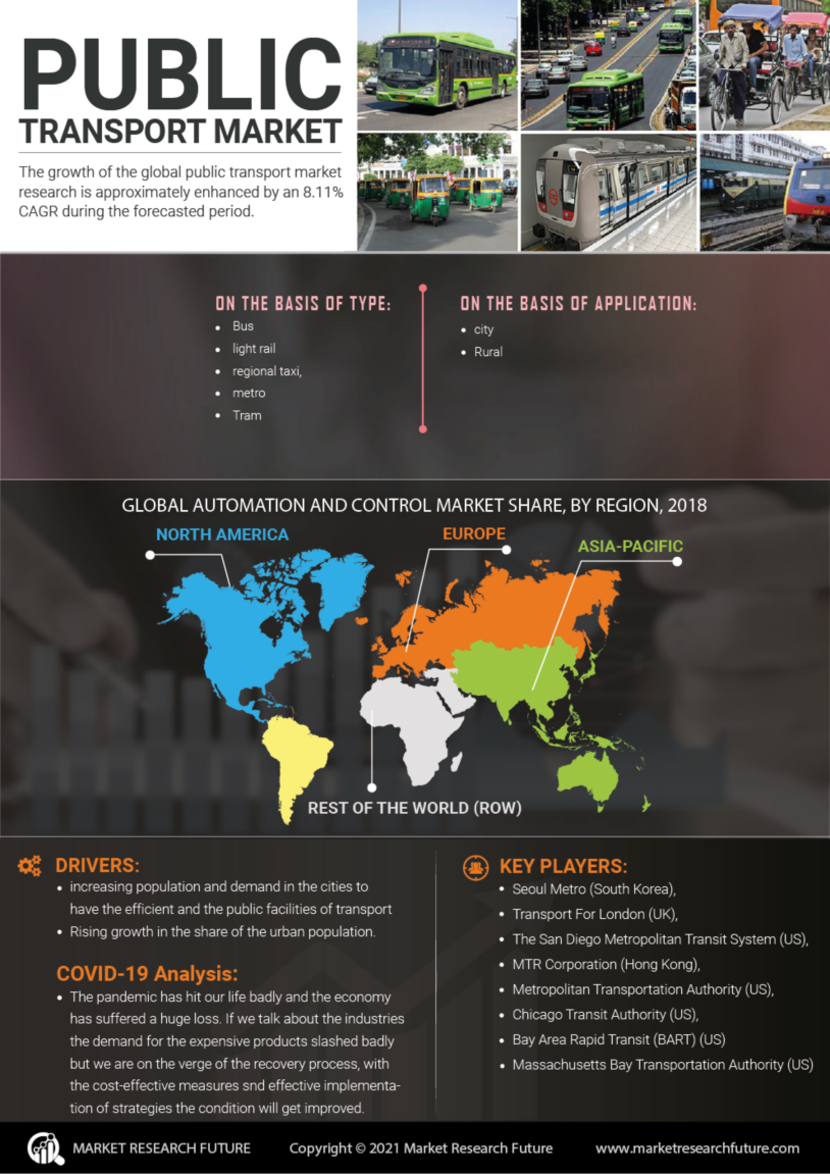 Global public transport is forecasted to have a steady growth in the coming years. Rising growth in the share of the urban population with the increasing population and demand in the cities to have the efficient and the public facilities of transport is added the fuel to the market. All these factors will lead to the growth of the global public transport market in various regions during the estimated period.

The pandemic has hit our life badly and the economy has suffered a huge loss. If we talk about the industries the demand for the expensive products slashed badly but we are on the verge of the recovery process, with the cost-effective measures send effective implementation of strategies the condition will get improved.

Various analysts are researching over the market insights and expertise are working upon the reports to help the client with various reports of other industrial vehicles.

- Rise in urban population and easier and convenient ways for this population to travel from one place to other.

- Government's initiatives to improve public transport infrastructure to attract more users towards it.

- Growing awareness of public transport in all industries.

- Security is one of the major concerns related to the public ride.

South America and the middle east Asia which is included in the rest of the world have witnessed amazing growth in recent years, with the focus on limiting emissions and rapid development in the public transport region with the curtailment of the use of private vehicles are some of the reasons behind the growth of this market. if we talk about the South American market which includes Argentina, Peru, Chile, Columbia. We have witnessed the growth in public bus transport infrastructure by the government of Argentina. A loan of USD 45 million has been approved by the world bank to support various infrastructure projects. These investments are likely to drive the growth of global public transport during the forecasted period.

The growth of the global public transport market research is approximately enhanced by an 8.11% CAGR during the forecasted period. In the wake of covid 19 crises, the expertise is trying to handle the situation by researching over various strategies opted by the other industrial vehicles so that a market insight has been given to the client and help them to deal with the stress of covid 19 pandemics.

The Asia Pacific is expected to grow at the highest rate in the forecasted period. The rising population in the region with the development in the public transport facilities coupled with the expansion of the cities are the primary reasons. South America and the middle east Asia which is included in the rest of the world have witnessed amazing growth in recent years, with the focus on limiting emissions and rapid development in the public transport region with the curtailment of the use of private vehicles behind the growth of the global public transport market in the Asia Pacific region.

What is the expected growth rate of the global public transport market during the forecasted period?

The growth of the global public transport market research is approximately enhanced by an 8.11% CAGR during the forecasted period.

What will be the expected market size by the end of 2027 of the global public transport market research?

As per the report who are the eminent players of the global public transport market?

What is the role of the bay area rapid transit company in the global public transport market?

It makes huge investments in the R and D, it has an experience of many years in providing the transport facilities and fund for the infrastructure development.

What are the main applications covered by the report?