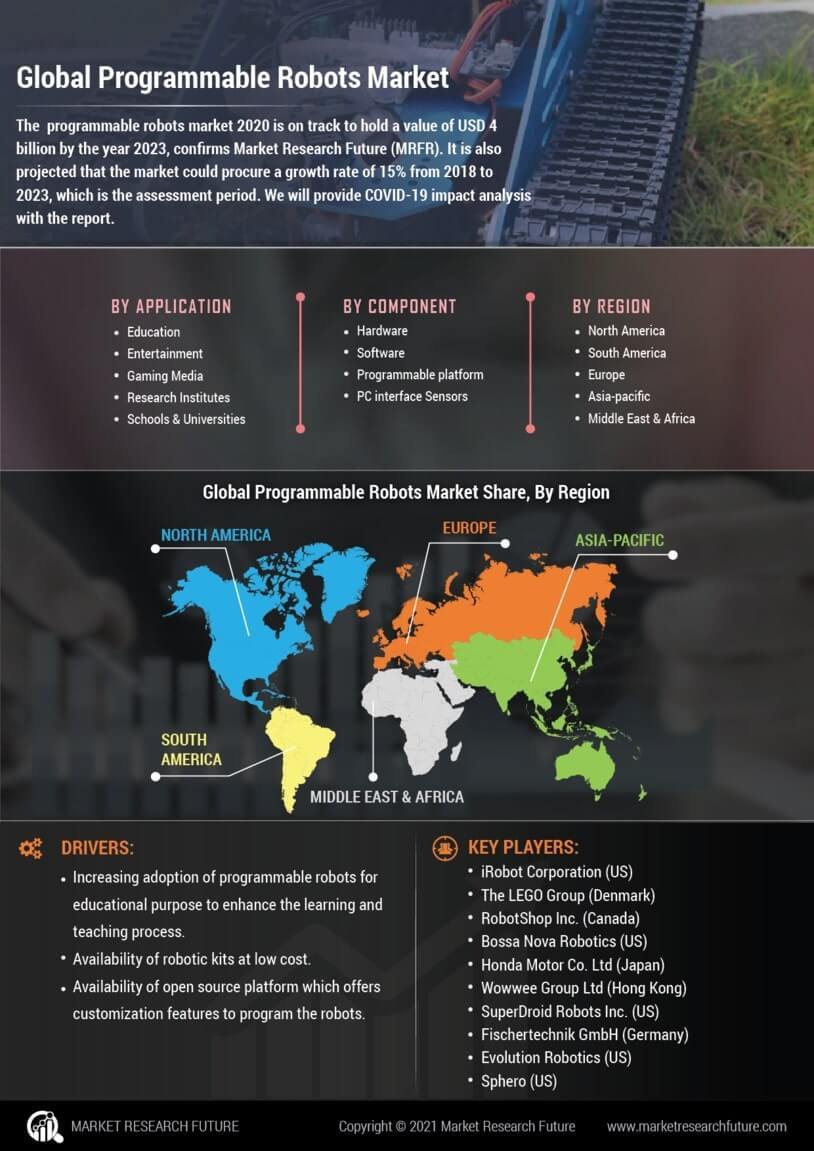 Programmable Robots Market Size is to reach USD 4 billion during the predicted forecast period at a CAGR of 15%.

The Programmable Robots Market Size is expected to reach USD 4 billion during the predicted forecast period at a CAGR of 15%. Robotics can increase productivity, change work practices and improve service offerings. Every industry vertical is being influenced by robots. However, making a robot is a time-consuming operation that requires a lot of drilling, soldering, programming, and other tasks. The usage of a programmable robot kit makes the painstaking work of manufacturing robots much easier. The kit includes all of the electronic and mechanical components needed to build a working robot that can execute basic movements. C/C++, Python, Java, C#/.NET, and Matlab are the programming languages utilized. Programmable robots are self-contained robots that may be commanded remotely or programmed with instructions. The operation of programmable robots with AI capabilities does not require any external control. It can adapt to its surroundings, the reason for itself, and complete activities on its own.

One of the reasons for the rising usage of robots will be their reducing price. A considerable drop in the prices of robotic components such as sensors and actuators, among others, is expected to result in a reduction in the price of robots. Advanced mobile robots, gadgeteer, and robotic arms are examples of programmable robots. Advanced mobile robots, for example, could revolutionize agricultural farming. In industrial robotics and automation, robotic arms are used to pick up and manipulate objects from a distance.

Since the COVID-19 viral outbreak in December 2019, the disease has spread to nearly every country on the earth, causing the World Health Organization to designate it as a public health emergency. The COVID-19 pandemic, on the other hand, is projected to have a short-term influence on the Programmable Robots Market Demand. As all major economies that are key hubs of consumer robotics research have been decimated by the spread of the virus, product developments and new product launches are projected to be particularly impacted. The Programmable Robots Market is predicted to expand in the post-COVID-19 future, as parents may want less social connection and engage their children with robots for various purposes. The Market Analysis has shown that COVID 19 has impacted the Programmable Robots Industry Share badly.


The Programmable Robots Market Opportunities are being stifled by a lack of awareness. The market is constrained by reasons such as the high cost of robotic kits and the need to improve their endurance. One of the major stumbling blocks is that once trained, these robots continue to function in the same way even if the task at hand needs to be changed in an emergency. Thus, these restraints hamper the market during the Programmable Robots Market Forecast.


In the classroom, programmable robots assist students in becoming more engaged in the four subject areas of science, technology, engineering, and mathematics (STEM). It accelerates the learning process by utilizing project-based learning, hands-on learning, collaborative learning, genuine learning, and constructive learning methodologies. Programmable robots are also utilized for gaming and media entertainment. Human-robot contact is encouraged by home entertainment robots. Sensors and vision care are provided to humanoid robots, Robo cats, and dogs so they can communicate with people, play games, and compete. These robots are also utilized as tour guides in service industries like theme parks and museums to deliver information to visitors while also providing entertainment value. Robots that are utilized for domestic purposes are mostly employed to aid elderly persons. The Programmable Robots Market Key Players are also playing an eminent role in the technology sector.

Based on the Component

During the projected period, North America is expected to dominate the programmable robots market. Well-established economies like the United States and Canada, which invest a significant amount of money in robotics research & development, are a prominent driver affecting the market growth in this area. Another factor driving the growth of the programmable robot market and increasing the Programmable Robots Market Opportunities is the increased use of robotic kits in schools, universities, and research organizations for instructional purposes. Due to increased awareness of robotics in education to enhance the learning process and emerging economies such as China, Japan, and South Korea, which manufacture electronic components at low costs, Asia-Pacific is predicted to grow at a large rate.

The market's competitive landscape is still fragmented, with a number of competitors producing products based on a variety of applications and consumer needs. The industry is projected to see a number of mergers and acquisitions, as companies compete for market share. The market is quite pricey, and installation and implementation procedures necessitate a substantial upfront investment. Major Programmable Robots Market Key Players are as follows:

The study examines the global programmable robots market's growth trajectory in terms of the present, historical, and future scenarios. It provides an assessment of the factors that are projected to influence market development, as well as the major trends identified in the research study. The research study also provides a broad overview of the market's vendor landscape. The study includes references to mergers and acquisitions, the competitive environment, and a market regional analysis. The study investigates the top players in the worldwide market's marketing and technology strategies.

What is the expected CAGR growth of the Programmable Robots Market during the forecast period?

The expected CAGR growth of the Programmable Robots Market is 14.94% during the forecast period.

What is the expected valuation of the Programmable Robots Market during the forecast period?

The Programmable Robots Market is expected to reach USD 4 billion during the predicted forecast period.

Who are the major key players of the Programmable Robots Market?