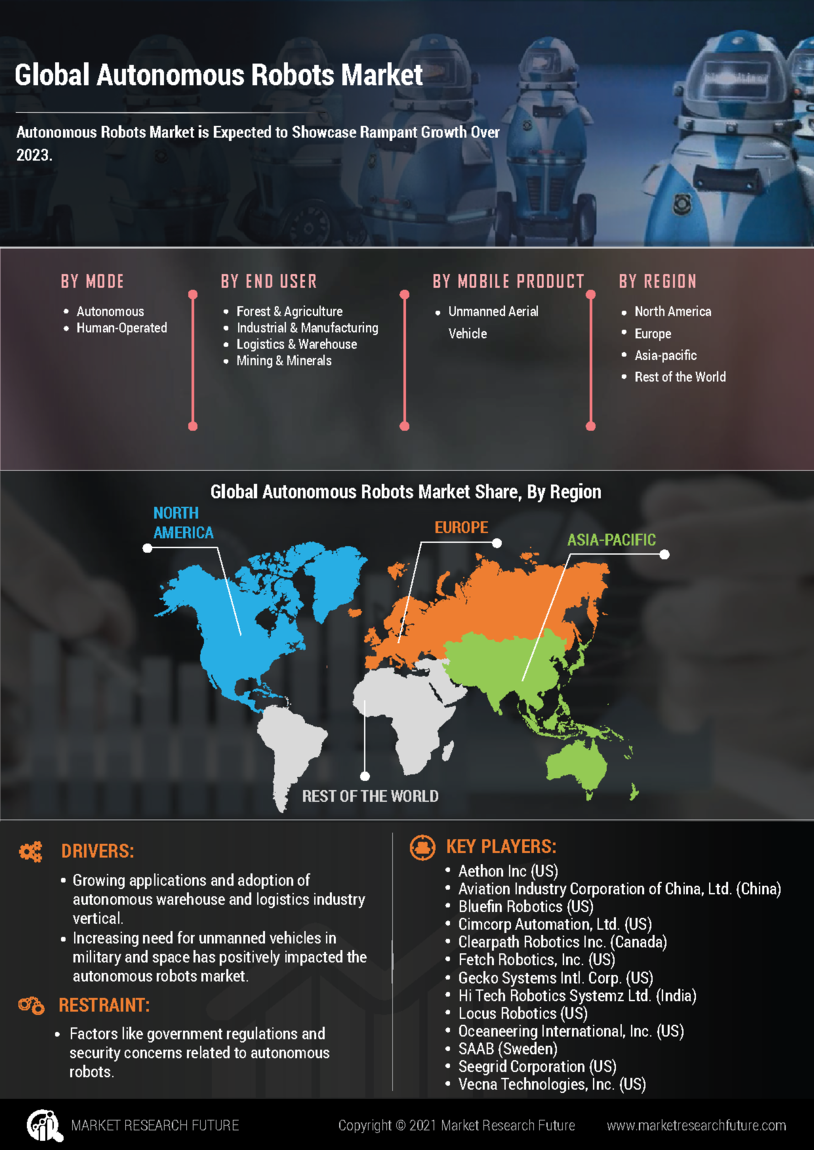 Globally, the size of the Autonomous Robots Market is set to grow at a CAGR of 16.90% estimated to reach USD 21.2 Billion by 2030 driven by the company’s future is likely to witness a promising return on investment and growth.

The curated report helps in discovering and discussing 4 major activities of the market that have a major role to play in depicting the market size for the current and the future. The use, development, and implementation of various kinds of autonomous robots across an array of fields and services promise an excellent yield when it comes to effectiveness, efficiency, and productivity in rendering reliable market devices and solutions to the worldwide target audience. Also, the investment in robots promises a huge return on investment for the market for years to come. The various sizes and features of robots are deployed in various functional areas that will enhance the production and functional ability of the autonomous robots market and lead the way towards regional expansion during the forecast period.

Artificial intelligence and machine learning are being deployed across various industry verticals and the autonomous robots have been designed with similar features and technology that are likely to help in the enhancement of the global market operations and help the market grow as per the predicted figures as laid down by the autonomous robots market experts and leaders during the forecast period that ends in 2030. The current forecast period of 2022-2030 has excellent growth prospects.

Since the initial positive cases of the novel coronavirus were reported, the fatality and deteriorating health condition of the patients followed. The healthcare and medical infrastructure of the vast economies of the world are witnessing major challenges. Some gave in and witnessed the collapse of the system on a huge scale, while others were struggling to meet the wide demand for important medicines and drugs that helped in improving the patient’s health. The pandemic has introduced the large unavailability of skilled labor and logistic support that is hampering the supply chain mechanism of the global market. This is resulting in a declined demand and the unavailability of raw material to produce the finished goods has hampered the ability of the production and manufacturing units thus, harming the growth potential of the autonomous robots market.

The government and public sector are dedicating a large sum of money in the form of investment to enhance production and expand the market size so that various robots can be employed across a series of verticals. This promises the transformation of huge opportunities into profitable business ideas that help to positively impact the set objectives of the autonomous robots market during the forecast period.


One of the major market players - KUKA, purchased another company with the name of Swisslog. The company’s future is likely to witness a promising return on investment and growth. Also, the rising demand for the employment of robots across other mushrooming industries like healthcare and warehouse logistics owing to the large scale benefits like excellent technical knowledge and expertise, better and judicious use of the available and employed resources are likely to present the market with factors that will help the market in expanding its services and operations during the ongoing forecast period of 2022-2030. Also, the market is developing a need for employing the kind of workforce that promises on-time delivery of services with proper technique will help the autonomous robots market to grow.


However, the cost of acquiring the market devices and employ the rendered operations by the global market players is quite high. The new and small enterprises do not have a high degree of capital to invest in acquiring these robots and employ them across various verticals and departments. This is likely to restrain the autonomous robots market from growing as per the prediction.


Based on the autonomous mobile robots market that is functioning and aiming for global expansion, the market has KUKA as one of its leading market players that will drive the market for worldwide growth. The company is understood to operate in a dynamic environment that is driven by creativity and innovation pouring from various sides. The company has also gained entry in China, as a part of the APAC regions’ domestic market. The company and the global market operations undertaken are witnessing the employment of innovative and technical leadership skills that are driving the market towards growth as per the predicted figures during the forecast period that ends in 2028.


The type segment of the autonomous robots market includes professional services, personal and domestic ones, as well.

Based on the geographical bifurcation of the global market, the market players extend the market devices and services in 4 major regions. These are the North American region, the APAC region, the European nations, alongside the rest of the world (RoW). With an excellent growth of the development of the information technology ecosystem alongside a well-established infrastructure to cater to the demand of the existing customer base and expand the same, the APAC region is likely to emerge as a dominant market force. China and its neighboring regions have a significant role to play that will help the market grow in the region. The global autonomous robots market predicts the growing contribution of companies like Alibaba, Walmart, and Amazon which develops a growing need for AGVs for warehouse automation on an expanded scale for the smooth conduction of the market operations. Also, the government is playing a very good role by rolling exemptions for a reliable operation of commercial drones and thus, help the APAC region emerge as a clear winner amongst the global competition during the period that ends in 2030.

The global autonomous robots market is witnessing a high increase in the competitive degree. To access the same, it is important to discuss the prominent players of the market which are as follows:

The autonomous robots market report helps in providing the market insights that help the potential investors make better decisions that will help and enhance the global market operations. The report discusses the impact of the pandemic on the market and the growth prospects available to the market. The report also discusses the performance of the segments worldwide that help in depicting the growth rate and reachable market valuation for the global forecast period that ends in 2030.

What is the growth scope of the autonomous robot market?

The worldwide market autonomous robot poised to expand at a high CAGR in the assessment period.

Who are key players of the autonomous robot market?

Hi Tech Robotics Systemz Ltd. (India), Oceaneering International, Inc. (US), and Locus Robotics (US) are some well-established names in the autonomous robot market.

What are autonomous robot trends?

Recently, developers are making constant effort in designing autonomous robot that can operate independently the depth of ocean and in space.

What are the autonomous robot market drivers?

What is the regional analysis of the autonomous robot market?

The US boasting of the presence of eminent tech companies can cause the North America autonomous robot market to soar.

What is mean by autonomous robot?

Autonomous Robots are intelligent robots that can perform tasks independently without the requirement of human interference.

Autonomous Robots Market is Expected to Showcase Rampant Growth Over 2030