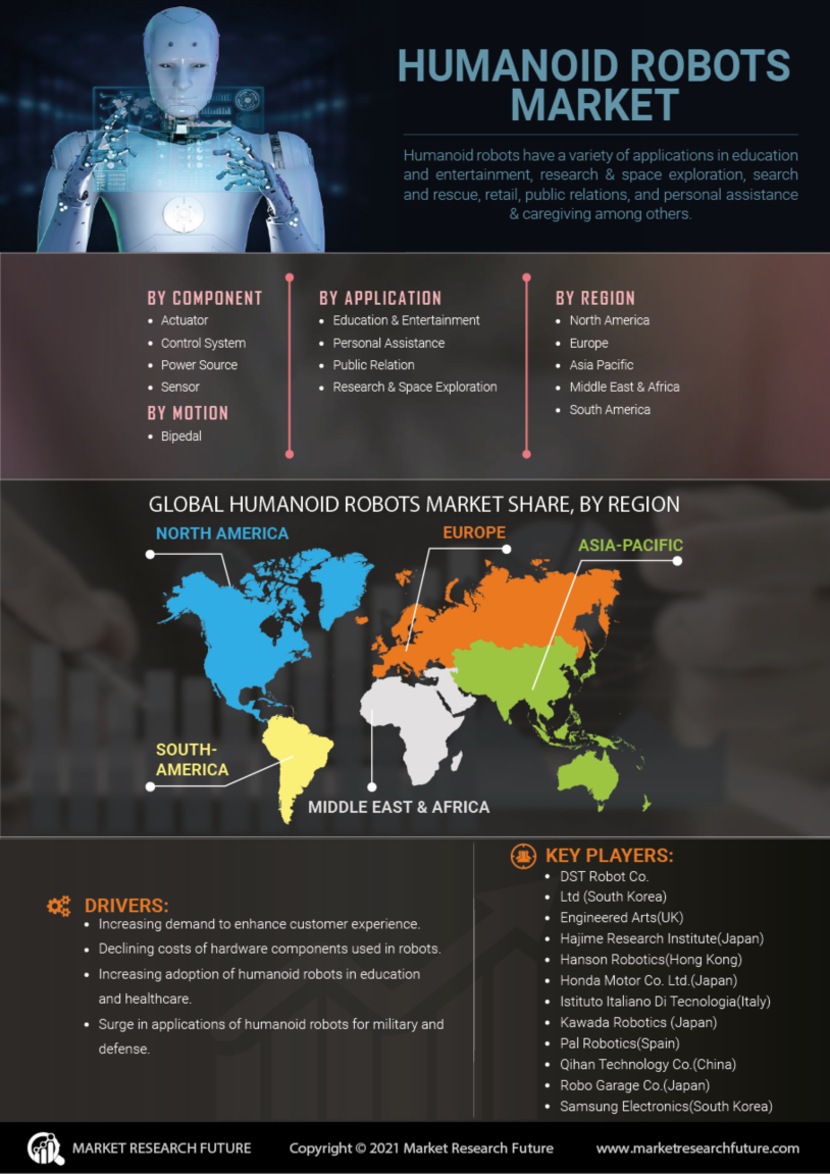 Market Research Future (MRFR), in its latest report on the Humanoid robots market 2020, explains the causes that are likely in impact the market across the assessment period. Humanoid robots are anthropomorphized robots with human like senses. Humanoid robot developers work on solving issues which include bipedal locomotion, dexterous manipulation, audio-visual perception, human-robot interaction, adaptive control and learning, targeted for the application in humanoid robots. The humanoid robot development industry constantly works on making robots that can work in close cooperation with humans in the same environments which are designed to suit human needs. The successful implementation of specialized industrial robots for industrial mass production has led to the development of general-purpose humanoid robots for a new set of applications. Humanoid robots are designed based on human-centered body design for it to have human like movements to adapt to a world designed for humans. Development in humanoid robots is moving in a direction to make them capable of having intuitive communication with human by analyzing and synthesizing speech, eye-movements, and mimicking gestures, and body language. Humanoid robots market have a variety of applications in education and entertainment, research & space exploration, search and rescue, retail, public relations, and personal assistance & caregiving among others. Humanoid robots market in retail deal with customer care and distribution process. Humanoid robots can have crucial applications in military search and rescue operations as their motion and durability can allow them to reach where humans cannot. Humanoid robots in public relations can answer customer queries and guide them to improve overall customer experience.

The humanoid robots market is segmented based on component, motion, application, and region.

By component, the global humanoid robot market is segmented into software and hardware. The hardware segment is further sub-segmented into sensor, actuator, power source, control system and others.

By motion, the humanoid robot market is segmented into bipedal and wheel drive.

By application, the humanoid robot market is segmented into education and entertainment, research & space exploration, search and rescue, public relations, retail, personal assistance & caregiving and others.

The prominent players keep innovating and investing in research and development to present a cost-effective product portfolio. There have been many key developments in the products that the key players offer in terms of database automation.

The regional analysis for humanoid robot market is done for North America, Europe, Asia-Pacific, and rest of the world.

Europe contributes significantly to the humanoid robot market. The presence of key players along with technological advancement and growth in development of artificial intelligence in the region is driving the growth of humanoid robots market.

What are humanoid robots?

Humanoid robots are anthropomorphized robots having human like senses.

Which region will lead the humanoid robots market?

What are the key applications of humanoid robots?

Humanoid robots have wide applications in personal assistance and caregiving, retail, public relations, search and rescue, research and space exploration, education and entertainment, and others.

Name the key players profiled in the humanoid robots market.

What are the strategies encompassed by key players to stay ahead in the competition?

Key strategies incorporated by key players to stay ahead in the competition include mergers, acquisitions, new product launches, joint ventures, partnerships, and others.