Primer Market: Information by Material (Dispersants, Epoxy Resins, Biocides and Others), By Applications (Concrete, Wood, Metal, Plastic and others), By End-Use Industry (Automotive, Marine, Building & Construction and Others) and by Region (North America, Europe, Asia-Pacific, Latin America and the Middle East & Africa) - Forecast till 2030 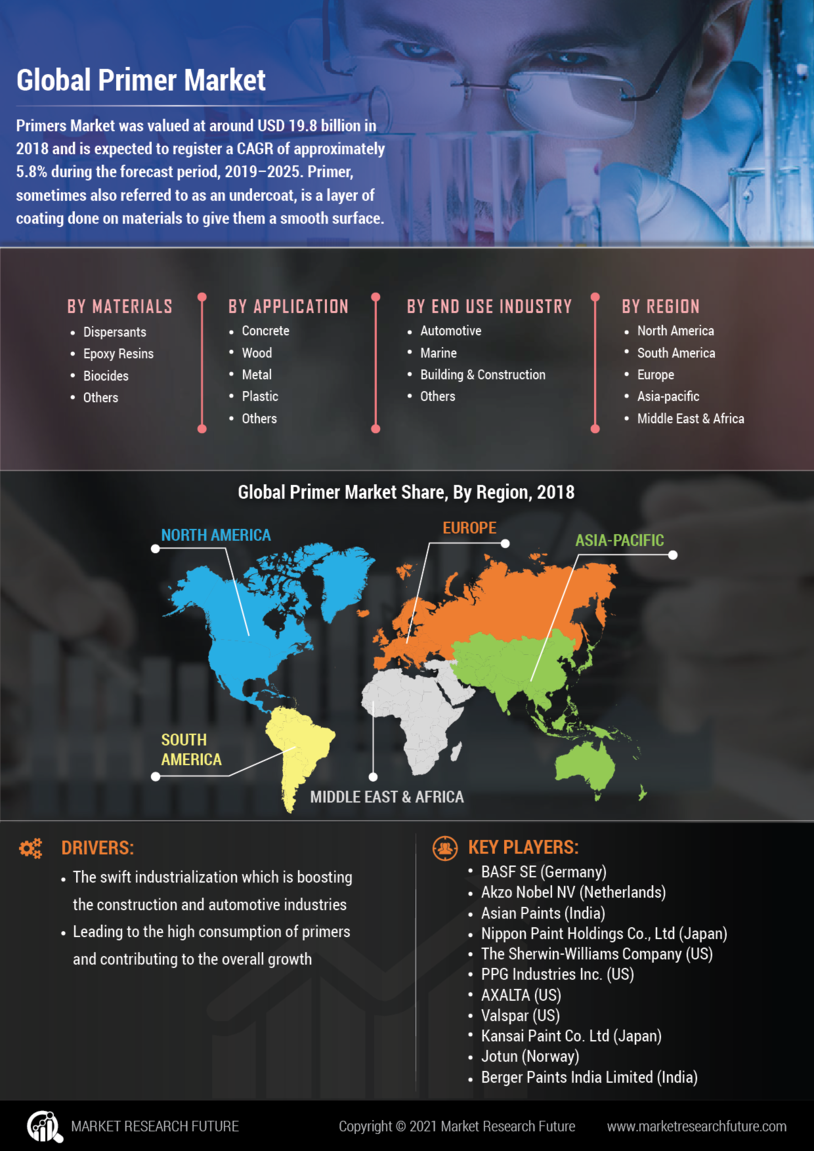 At times likewise alluded to as an undercoat, Primer is a layer of covering done on materials to give them a smooth surface by evening out the surface before painting. It safeguards the material from the paint, keeps dampness from arriving at the surface, restrains the paint to soak in the substrate, and expands the bond with delaying the wear of paint outside the material. Contingent upon the application primer are produced using various materials like the groundwork’s applied on the wood contains biocides that forestall the development of form on wood, introductions for metals have an underlying enemy of destructive shade to shield them from erosion. There is a flood in development of the worldwide Primer Market inferable from the quick industrialization, which boosts the development and car businesses utilizing different introduction for the better futures of their items, subsequently prompting the maximum usage of primer and adding to the general development of worldwide Primer Market.

The fast development of the development area is expected to be perhaps the main variable projected to drive the Primer Market business during the estimated time frame. The development area is required to encounter hearty development universally because of the flooding infrastructural advancement. The improvement of end-use areas, such as aviation, oil and gas, marine, mining, car, power age, and others, is projected to greatly reinforce the worldwide defensive coatings market. The Primer Market is expected to thrive because of the expanding interest for such coatings in non-industrial nations, for example, China, India, and Japan. Moreover, quick urbanization and industrialization have brought about the advancement of the Primer Market.

The outbreak of COVID-19 has contrarily affected the market because of the inconvenience of lockdown that had brought about the transitory closure of different assembling units. The pandemic brought about different difficulties for the Primer Market by projecting an adverse consequence on the development of these areas. The business is expected to show recovery from 2021 onwards.

The development of auto-creation is driving the Primer Market for fluid nitrogen. Since worldwide air contamination is quickly expanding, and vehicle discharges have an enormous commitment to the issue, it is basic for a draftsman or organizer to think about an option in contrast to current customary fuel vehicles. Nitrogen-filled liquid vehicles can likewise be a superb other option. Thus, liquid nitrogen is generally utilized as a coolant in vehicles. Accordingly, expanding robotization will require more fluid nitrogen, which will go about as an impetus for the fluid nitrogen market during the estimated time frame.

Fluctuating crude materials costs is the major challenge in the Primer Market. Expanding oil costs anticipated for coming years will prompt expanded feedstock costs that will straightforwardly affect the costs of all manufactured gums utilized in covering applications. Resins, colors, fillers, added substances, and solvents are the crude materials used to make coatings and paints. Pitches are a significant component for the creation of paints and coatings. In the assembling of epoxy preliminaries, epoxy tars are utilized. High epoxy costs and different saps like acrylic, alkyd, and urethane will influence the Epoxy Primer Market.

Developing interest for superior epoxy groundwork and high Industrial development in APAC and the Middle East and Africa is an adequate opportunity in the Primer Market. The appeal of epoxy preliminary in different applications and expanding need to decrease the misfortune brought about by erosion drives the worldwide epoxy groundwork market.

The essential restraint in the Primer Market is a disservice of fluid nitrogen. Liquid nitrogen is utilized for various purposes, including machine cooling, a remedy to eliminate undesirable skin, moles, pre-harmful cells, and cryogenics. It has a limit of 196°C. The advantageous freezing property of liquid nitrogen additionally has adverse results. The liquid nitrogen exhaust may freeze skin tissues briefly, and because cold likewise burns through, the fluid nitrogen market patterns are advantageous. On the off chance that a limited quantity of it is gulped, it can make fluid nitrogen structure in the stomach.


During the estimated time frame, the metal fragment is required to lead the worldwidePrimer Market. In different applications like auto, marine, flying, energy infrastructural constructions, and oil and gas, epoxy preliminaries are ordinarily utilized on metal substrates. These groundworks structure a critical base through the car and marine applications, giving brilliant grip and protection from consumption and synthetics. Their application likewise assists with lessening long-haul upkeep costs.


The structure and development section holds the biggest offer in the Primer Market in 2020 and is developing at a CAGR of 6.8%. Epoxy preliminaries are generally utilized for deck applications on cement and brickwork surfaces. In this interaction, metal substrates utilized for preparing structures are additionally liked. APAC is the biggest market in building and development applications for epoxy groundworks. Development can be because of expanded government interest in foundation development in non-industrial nations like China, India, Malaysia, and others. This present district's infrastructural advancements bring about a huge interest for coatings, boosting the worldwide Primer Market.


The APAC area addresses the biggest piece of the pie in 2020, up to thirty percent. This biggest offer is because of the huge interest in coatings from nations like India, China, and different nations in Southeast Asia. A significant factor expected to drive the area's interest is the development of the auto, assembling, marine, and modern areas.

Asia-Pacific, North America, Latin America, Europe, and the Middle East, and Africa are the regions under which the Primer Market is segmented. But Asia-Pacific held the biggest offer in the worldwide Primer Market in 2020 and is additionally expected to be the quickest developing locale during the estimated time frame. Attributable to the expanding growth of domestic productions per capita of the nations, for example, Japan, China, and India and the rising private and non-private development in the locale has prompted intense usage of preliminaries in the regional Primer market. For example, as indicated by the India brand value Foundation (IBEF), the public authority of India has designated a USD 63.20 billion financial plan to framework area for FY19.

The major players in the Primer market:-


November 2021- a San Jose-based venture capital firm, Primer Sazze Partners, announced its plans to settle its second fund at USD127 million, targeted in the first half of 2022 to invest in startups established by Korean entrepreneurs in North America and Asia. The list of partners could include Hana Financial and several other Korean tech entrepreneurs, including the founder of Woowa Brothers, Bong-Jin Kim; CEO of Tapas Media, Chang Kim; CEO of SendBird, John Kim; CEO of FiscalNote, Tim Hwang; and CEO of Noom, Saeju Jeong. June 2021- Shopify has announced the acquisition of the team from augmented reality startup Primer that makes an app, which allows users to visualize what paint, wallpaper, or tile will look like on the surface or inside of their homes. Co-founders Russ Maschmeyer and Adam Debreczeni revealed in a blog that Primer’s services and the app would be closed down by July 2021 as an element of the deal. Shopify will also acquire Primer’s team of eight employees after the acquisition. In June 2017, Sherwin-Williams gained The Valspar Corporation (US). The securing helps the organization in improving its situation as a chief worldwide paints and coatings supplier. Both the organizations have profited with this obtaining, as it has expanded their item reach and development abilities and aided them in improving their advances. In December 2017, BASF's Coatings division introduced another auto coatings plant at its Bangpoo fabricating site, Samutprakarn territory, Thailand. The new plant is the main BASF auto coatings fabricating office in ASEAN.

The report highlights the global Primer Market Growth development includes its revenue hike's growth potential by the end of the forecast years in 2030.

At what CAGR is the worldwide Primers market projected to fill in the estimated time frame?

Primer Market is projected to develop at around 5.8% CAGR during the evaluation time frame.

What was the value of the global Primers market in 2018?

Which is the biggest application fragment in the worldwide Primers market?

Concrete is the biggest application fragment in the worldwide Primer Market.

Which region holds the largest share in the global Primers market?

Who are the top players in the global Primers market?