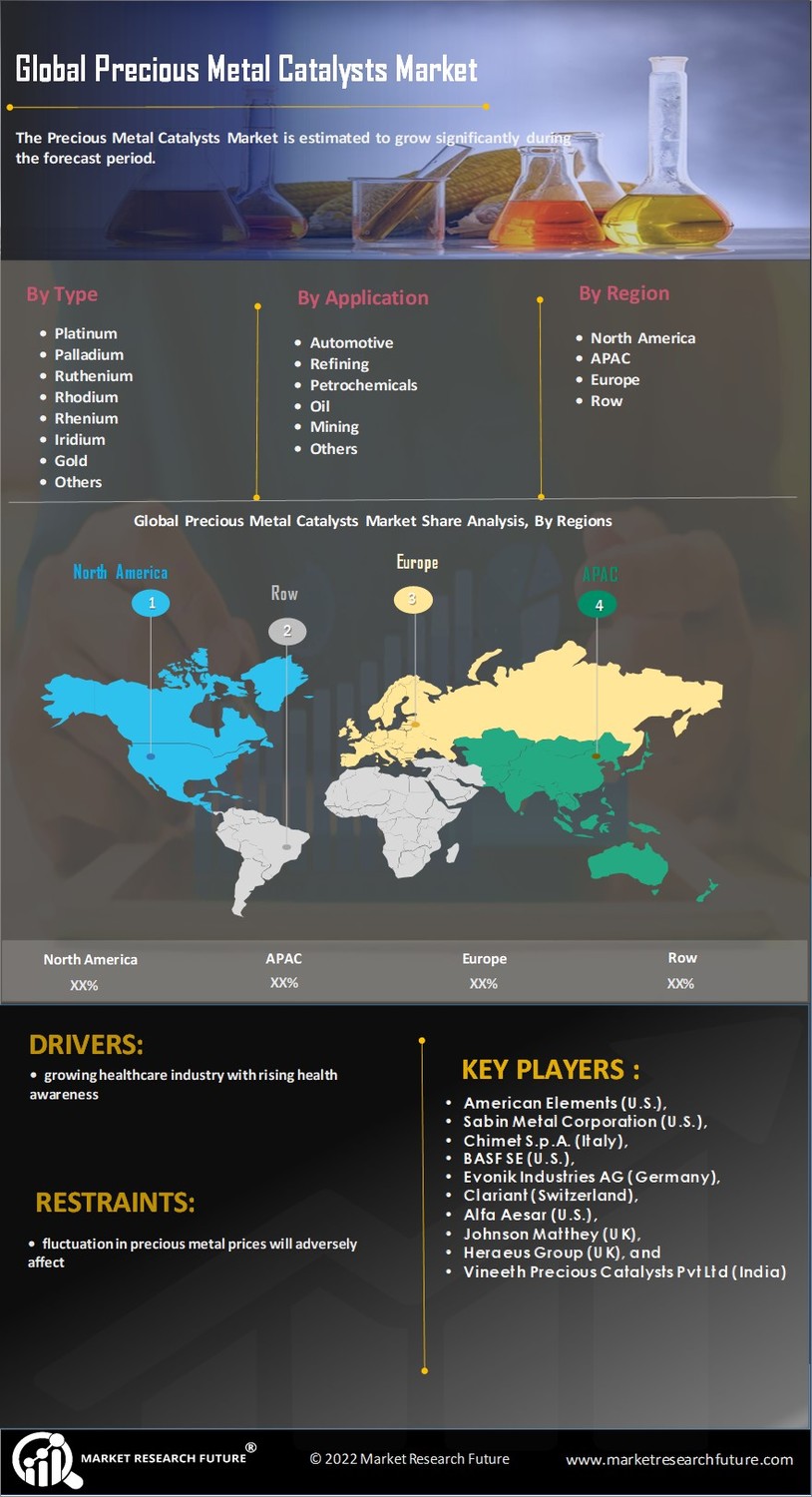 The Precious Metal Catalysts Market size is projected to be worth USD 27.32 Billion by 2027, registering a CAGR of 6%.


The Precious Metal Catalysts Market size is projected to be worth USD 27.32 Billion by 2027, registering a CAGR of 6%.Catalysts made up of precious metals are generally used in the chemical industry because they can accelerate chemical reactions. There are several common precious metals, including platinum, palladium, rhodium, and silver. Because of its low emissions of volatile organic compounds and other pollutants, platinum metal is widely preferred in the automotive industry. Since they tend to deactivate over time, the metal must be recovered from spent catalysts by dissolving them in string acid and regenerating them. A growing trend is to use nano-particle catalysts made of noble materials due to their improved and quick performance during chemical processing and to offset the high cost of such materials.

Automotive, refining, hydrocarbons, petrochemicals, pharmaceuticals, electronics, and mining are some industries that are using precious metal catalysts. Pyro-metallurgical technology is used to refine precious metal catalysts after use, which provides high returns to the refining company. Such metals are subject to environmental regulations during refining because they produce solid, liquid, and gaseous byproducts, especially in North America and Europe.

In the precious metal catalysts market, COVID-19 has severely impacted demand and supply. The precious metal catalysts market is negatively affected by the pandemic because of the lockdown regulations on transportation imposed by government bodies. Due to the pandemic scenario, many countries experienced lockdowns, which decreased people's desire to drive personal vehicles, depressed demand for automotive catalysts, and decreased demand precious metal catalysts. As a result of the COVID-19 crisis, the pharmaceutical industry has fundamentally changed its operations. Over the first two quarters of 2020, these countries have put pressure on budgets, reduced treatment of non-COVID-19 patients, and undercut market fundamentals.

As governments implemented pollution control regulations, catalytic converters became an effective way to comply. A catalytic converter converts toxic byproducts of combustion into cleaner emissions by catalyzing chemical reactions. The astringent regulatory framework has been put in place to ensure pollution goals are met, which will, in turn, drive a demand increase for precious metal catalysts.

To counter the high cost of noble materials as well as to improve performance during chemical processing, nanoparticle catalysts derived from noble materials have become increasingly popular. Metal nanoparticles found in precious metal catalysts readily absorb hydrogen and oxygen from the atmosphere. several astringent market growth will likely substitutes are readily reacted with the absorbed hydrogen and oxygen under moderate conditions. In this way, by reducing by-product formation and retaining mild reaction conditions, a relatively high yield can be achieved. Recent advances in nanotechnology have resulted in the preparation of precious metal catalysts. Consequently, there is a reduction in production costs, energy savings, and increased productivity. Accordingly, the market growth of precious metal catalysts will be driven by the increasing demand for nano-scale precious metal catalysts during the forecast period.

Several precious metals are volatile and difficult to predict, including platinum, palladium, iridium, ruthenium, and others. Using precious metal catalysts in a company's value creation chain poses a challenge because of severe price fluctuations. Profit margins, capital commitments, and competitiveness are all affected by the volatility of the precious metals price. Based on data from the US Geological Survey, the average prices of rhodium have more than tripled compared with January 2019 prices; palladium has increased by 68 percent, while platinum has increased by 22 percent. Gold is largely dependent on industrial demand, while platinum is highly dependent on mining activity. Platinum prices can therefore be unpredictable. Platinum prices fluctuate more than any other precious metal. This fluctuation in precious metal prices will adversely affect the precious metal catalysts market in the forecast period.

The precious metal catalyst market is growing as more research is being invested to reduce costs and gain maximum returns from recovered metals. Increasing environmental regulations on carbon emissions are contributing to an increase in product demand from the automotive industry around the world. India, China, and Brazil have expanded their automotive industries in recent years, which contributes to the market's growth. Market growth will likely be bolstered by the surge in demand for hydrogen fuel cells vehicles. As a result, the precious metal catalysts market is driven by the growing healthcare industry and the growing health awareness among consumers. Increasingly, it is used as a cancer-fighting agent in pharmaceuticals. The Chirik Group has developed a catalyst based on cobalt and iron with Merck & Co. this is due to the limited availability of precious metals. Petrochemicals are also being used by major end-use industries such as automotive and construction, which is driving the market growth. Even so, the demand for precious metal catalysts will likely decrease as more bio-based chemicals are used.

Markets are classified according to the type of metal: platinum, palladium, ruthenium, rhodium, iridium, rhenium, gold, silver, nickel, and others.

The global market for precious metal catalysts is categorized according to their application into those used in automotive, refining, pharmaceuticals, petrochemicals, oil, mining, electronics, and others.

European precious metal catalysts dominated the market in 2017 and are expected to continue experiencing significant growth during the review period. Rising environmental concerns are boosting the growth of the hydrogen fuel cell vehicle market, which is revitalizing the automotive industry. The new passenger car will be required to emit 95 grams of CO2 per kilometer from 2021. Health care spending is growing, which further stimulates demand for products.

As the automotive industry in emerging economies expands and disposable income rises, the Asia Pacific region is the fastest-growing region for precious metal catalysts. As the Indian government sets high emission standards, manufacturers are increasingly using lightweight vehicles to meet these standards.

Despite the reviving automotive industry with an increase in lightweight vehicles, North America also leads the market for precious metal catalysts. Furthermore, in the U.S., there are certain rules for refining spent catalysts under the Comprehensive Environmental Responsibility and Liability Act. A rising geriatric population is boosting industry growth as a result of the growing pharmaceutical market.

A French manufacturer, Groupe PSA, will increase sales of vehicles in Brazil and Mexico, leading to considerable growth in the Latin American region.

The Middle East and African economies are expected to grow moderately during the review period, with strong end-use industries benefitting refiners and petrochemical companies.

October 2021- The world's largest palladium producer, Nornickel, announced the launch of the Palladium Challenge, a contest with a $350,000 prize, organized in collaboration with the International Precious Metals Institute to make it popular outside the automotive industry. The challenge is meant to encourage academic institutions, businesses, and individuals and develop sustainable use-cases that feature palladium and boost demand for the metal.September 2021- Mineworx Technologies, in partnership with Davis Recycling, its U.S.-based partner, is shifting to seize an enormous opportunity of extracting platinum and palladium from diesel catalytic converters without using smelting. Every year 50% of the world's supply of platinum and eighty percent of the world's supply of palladium are used in catalytic converters, but at present, only 30% of the PGMs are recovered. Catalytic converters need the use of 12.5 million oz. of palladium and platinum every year for gasoline engines, and 27 million such units are scrapped every year.Platinum is a major market segment since platinum catalysts reduce CO2 emissions. Industrial processing units generate a great deal of pollution in the automotive sector, and so it is frequently used as a way to reduce it. A significant portion of platinum consumption can be attributed to the rise in diesel sales. Platinum is not the only emission control catalyst utilized. European emissions regulations on Euro 6 and Euro 7 make it a dominant player in the European market.​

By improving the efficiency of industrial processes through the use of auto-catalysts, emissions from gasoline and diesel engines can be reduced. The platinum group metals found in autocatalysts have proven most effective in reducing pollution generated by a variety of gasoline and diesel vehicles for more than 35 years.

In the average 10-year life span of a vehicle, an autocatalyst would remove 98% of the harmful emissions from the exhaust. Without them, the average family car would emit 15 tonnes of toxic gases.​ The use of platinum along with pollution control catalysts in automobiles is also widespread. Examples of applications include vehicle engine control sensors, airbag initiators, electronic engine management, and spark plugs.​ In the third quarter of 2019 and 2020, global auto production was approximately 65 million units and 50 million units, respectively, according to OICA (International Organisation of Motor Vehicle Manufacturers). In light of COVID-19, production has decreased. The automobile industry, nevertheless, is expected to recover during the forecast period due to the lifting of lockdown laws and transportation regulations. The enhancement of medical technology with platinum also improves health care. There is also a lot of utilization of platinum group metals in the pharmaceutical industry since platinum, palladium, ruthenium, rhodium, iridium, and osmium are used in several important catalysts.​ Platinum-based emissions control catalysts are discovering an increasing number of applications and increasing the demand for platinum catalysts from sources such as automobiles, refineries, petrochemical plants, industrial chemical processing plants, and pharmaceutical plants, among others, thus increasing the market studied.

Market segments for precious metal catalysts include types, applications, and geographies. There are several types of platinum in the market, such as platinum, palladium, rhodium, iridium, and ruthenium. There are different segments based on application, including automotive, pharmaceutical, petrochemicals, and other applications. Precious Metal Catalysts Market size and forecasts are also provided in this report across 17 countries across major regions. We have sized and forecasted the market based on revenue (USD Million) for each segment.

In the precious metal catalyst market, which region will have the largest share?

The market for precious metal catalysts is likely to be dominated by Europe.

Which prominent players are there In the precious metal catalyst market,?

How is the precious metal catalyst used in various applications?

Mines, electronic, pharmaceutical, petrochemical, hydrocarbon, refining, and automotive are some of the industries that use it extensively.

The market for precious metal catalysts is driven by which factors?

The market is experiencing strong growth due to increased research and development investments, environmental regulations, and the auto industry.

Precious Metal Catalysts Market: Increasing use of precious metal catalysts in the automobiles is...