Power Sunroof Market Information By Material (Glass And Fabric), By Sunroof Type (Top-Mount, Panoramic, Solar And Others), By Vehicles (Sedan/Hatchback, SUV and others) and Region - Forecast To 2030 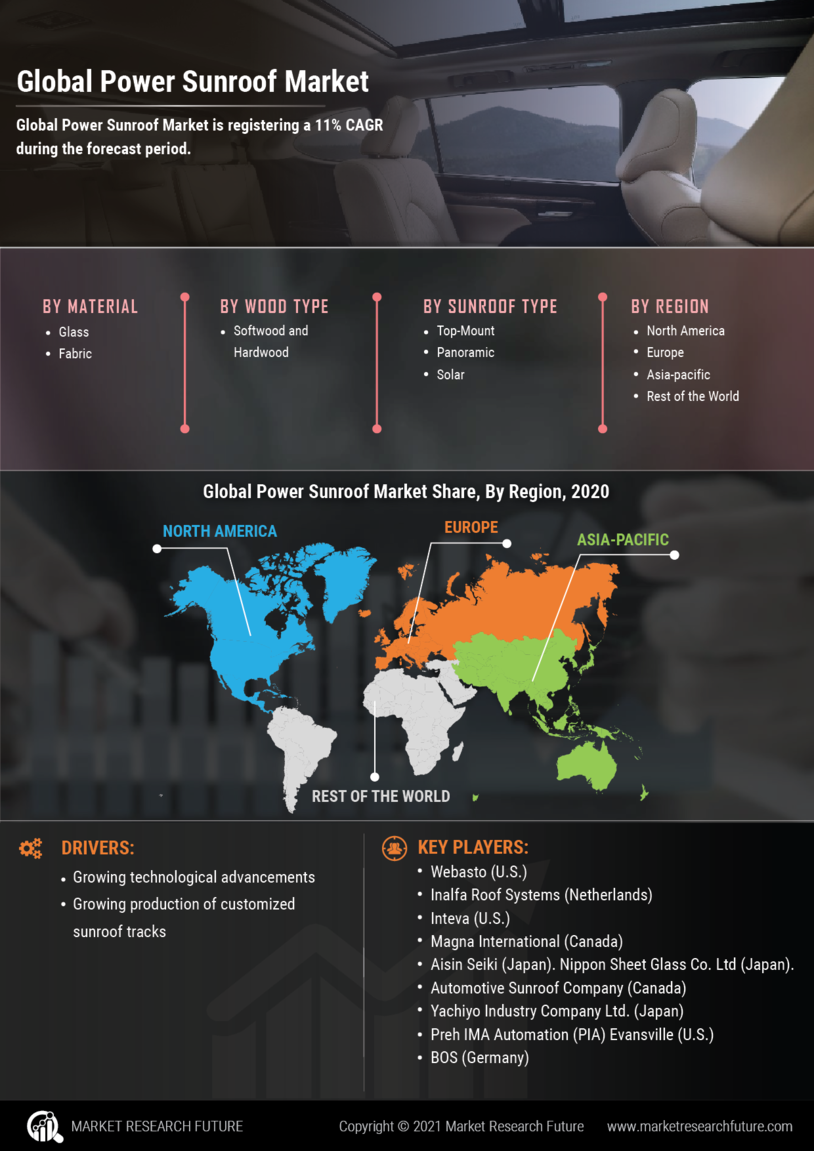 Power Sunroof Market is expected to be valued at USD 2.3 Billion with a CAGR of 11% Forecast by 2030

Automotive sunroof market is projected to grow at a CAGR of over 11% during the forecast period in terms of value backed by growing technological advancements, and increasing demand of luxury cars.

Moreover, the growing production of customized sunroof tracks is a major trend boosting the global automotive sunroof market. Hence, with a growing car production, the demand for sunroofs will simultaneously increase, among OEMs. The new trends being witnessed are research and development initiatives being carried by automotive manufacturers with focus on advantageous locations for production and short-distance supply to reduce costs. Recently, in 2017, Inteva products receives international innovation award for structurally integrated panoramic sliding sunroof.

Power sunroof market is expected to be promising during the forecast period due to the major driving factors such focus on high-quality products, changing lifestyle of consumers and rising spending power. Automotive companies including passenger cars manufacturers are constantly trying to emphasize more on innovation for their product offering so as to enhance the efficiency in automotive sector.

With the increasing population, the demand for vehicles is also increasing, leading to an increase in the production of automobiles. Overall, global car production is expected to rise by an annual average rate of 3.5% in the period, from 2013 to 2017. Significant developments in component materials combined with increasing number of factory installed sunroofs are estimated to positively impact the market demand.

The growing production of customized sunroof tracks is major trend gaining traction in the global automotive sunroof market. Manufacturers are introducing customized parts, which are designed and built using special machinery as per the customer requirements. Moreover, increasing consumer preference for use of alternative fuel vehicles persuaded automotive manufacturers to develop sunroofs with built-in solar cells that power the vehicles. Challenges associated with design and manufacturing glass sunroofs can hamper the structural integrity of the vehicle due to change in the center of gravity on account of increased weight on the rooftop. 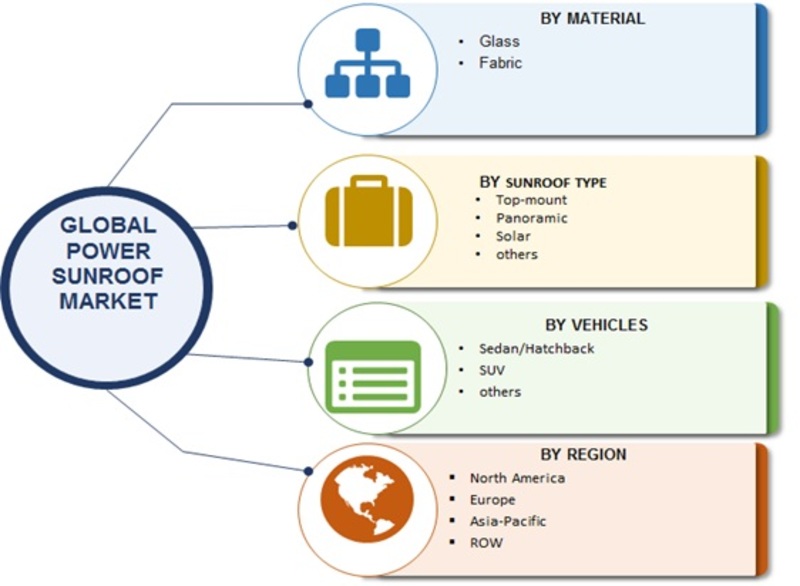 Power sunroof market catered across different geographical regions namely North America, Europe, Asia Pacific, Middle-East and Africa along with further country wise segmentation. Currently, Europe dominates the sunroof market throughout the forecast period, followed by North America. Panoramic sunroof is the fastest growing segment, which will dominate the market in the forecast period. Asia-Pacific is expected to see significant growth as large demand and production of automobiles. This is primarily due to development of automotive manufacturing industries in economies such as Japan and South Korea and the continued strong support for solar sunroofs.

Automotive vehicle production has been growing rapidly with a substantial increase in global population and vehicle owning capacity. The demand for sunroof witnessed a spike in popularity, especially among the younger population in Asian countries. These factors have been greatly influenced by the use of sunroof systems and the developments in them, which in turn have propelled the market, globally.

One of the most iconic style choices for cars of all recent trends is that of the sunroof. A car sunroof is an opening on top of a car roof which allows light or fresh air to enter the interior. Sunroofs may be manually or automatically operated according to the type of car. They come in different shapes, sizes and styles and act as extra accessory and not as a standard one. The global power sunroof market is a very dynamic market and is expected to witness high growth over the forecast period. The development of new and diversified technologies is creating exciting opportunities within the automotive industry.

The report for Global Power Sunroof Market of Market Research Future comprises extensive primary research along with the detailed analysis of qualitative as well as quantitative aspects by various industry experts, key opinion leaders to gain the deeper insight of the market and industry performance. The report gives the clear picture of current market scenario which includes historical and projected market size in terms of value and volume, technological advancement, macro economical and governing factors in the market. The report provides details information and strategies of the top key players in the industry. The report also gives a broad study of the different market segments and regions.

Mention the segments included in the study of global smart labels market.

Materials and vehicles are the segments included in the study of the market.

What are the key drivers for the global smart labels market?

The growing production of customized sunroof tracks is the major factor gaining traction in the global automotive sunroof market.

What is the growth phase for the market of Power Sunroof?

At what CAGR the Global automotive sunroof market will be gaining in the forecast period?

Global automotive sunroof industry is projected to grow at a CAGR of over 11% in the forecast period.

Which region has a stable market position across the globe?

Europe has a stable market position for the sunroof in the forecast period.

Global Power Sunroof Market, To Grow At ~ 11% CAGR, During The Forecast Period