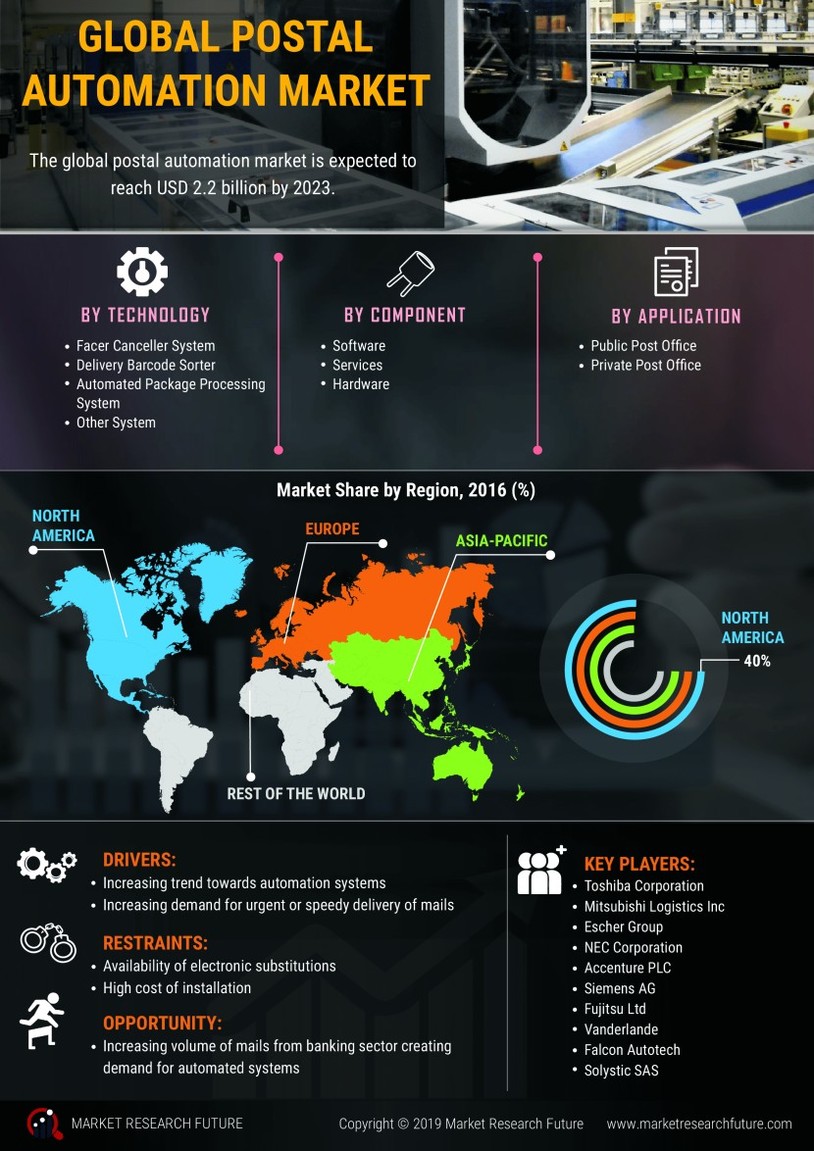 The pandemic has a severe effect in different markets, resulting in several sectors' slowdown. The pandemic has shown a negative impact on the market. Pandemic has a severe impact on the trade industry, impacting the decline of the manufacturing and raw material industry as well due to which the postal automation system market got affected. In the outbreak, the shutdown's improvement made people use smart devices for mailing, which directly impacted the postal automation market due to the automatic use and extensive result. The system requires time to time up-gradation and servicing for an outstanding result. The increasing cost and demand by the end-user for quick service made the postal industry trust the market.

Chief Factors Existing in the Market


The improvisation in the people's living standards and continuous urbanization, fuel the market growth. With time the demand for receiving the important mail increases, which drives the market towards growth. Industries adapting to artificial intelligence and machine learning are boosting the postal automation system market. The automation system carries out the works such as writing addresses and printing to consume time and effort. The requirement for quick delivery of the mail by the customers is a factor that fuels the automation system market.


The market faces major challenges that affect its growth during the forecast period. The presence of less-skilled people to install, operate, and design is a challenge that the market faces. The major market players should focus on the market challenges to overcome them in upcoming years.


Owing to the growing digitalization and people acquiring to use digital mode for messages is act as a restraining factor. Due to this, the volume of letters has also reduced and limited the postal automation system market growth. The investment and maintenance cost of the automated system is another restraining factor that affects the market's growth. Inclination towards the internet and demand for smart devices result in a declination of a traditional form of mail, hindering the market's growth.


The market overview evaluates the future opportunities and recent market situation. The market's future growth is predicted based on several demands and development. The market factors show the major effects on the development of the market. The drivers and opportunities fuel the postal automation system market share to reach the required growth of the market. In contrast, the challenges and restraining factors limit the market growth by decreasing the market's demand. The market players should take all the factors into account. Due to the pandemic loss, the market will overcome the tough situation and several challenges.

The postal automation system market size is divided into major segments. The segments are components, technology and application.


The Postal Automation System Market is segmented into delivery barcode sorter and facer canceller system. The delivery barcode sorter is expected to register the highest growth rate. Due to the advancement of technology, the industries are coming up with newer technology to reduce workload. Based on the postal automation system market analysis, the segment facing canceller system is growing with a CAGR of 10.13%.


The postal automation system market is bifurcated into hardware based on the segment component. The hardware segment is predicted to hold high CAGR in the upcoming period because of hardware for sorting and sequencing based on shape and volume. In 2017, the hardware segment held USD 845.8 million and was estimated to experience a CAGR of 10.75%.

The postal automation system market is situated in North America, Europe, Asia Pacific and other parts of the world. The presence of different prominent key players in the North American region further growth. The increasing demand from various sectors such as BFSI, government and others in the North America region improves the growth factor of the market. The Asia Pacific region is expected to hold the highest growth rate due to India, Japan, and China in the upcoming years. The growing economy is the base factor for market growth in several world regions.

What are the technology-wise segments specified in the report?

Facer Canceller System, Delivery Barcode Sorter, and others are the technology-wise segments covered in the report.

By component, which segment is leading the global market and what is its growth rate?

By component, the hardware segment is leading the global market and its growth rate is projected to be 10.75% during the evaluation period.

Who are some of the most renowned vendors in the global market?

The report projects which region to be the largest market during the review timeframe?

The report projects North America to be the largest market during the review timeframe.

Which factors are fostering the market growth across the globe?

The market is gaining immense momentum across the globe, on account of the rising adoption of the latest technologies like optical character recognition and others coupled with the increasing urbanization.

Which factors are expected to negatively influence the market growth in the coming years?

Rising labor cost can negatively influence the market growth in the coming years.

What was the segmental value of the public post office application in 2017?

The segmental value of the public post office application in 2017 was USD 867.36 million.