Polyurethane Dispersion Market Research Report Information By Type (Water Based And Solvent Based) By Application (Coatings, Adhesives & Sealants, Leather Finishing, Paper & Textile, Fiberglass Sizing And Others) And By Region (North America, Europe, Asia-Pacific, And Rest Of The World) –Market Forecast Till 2030 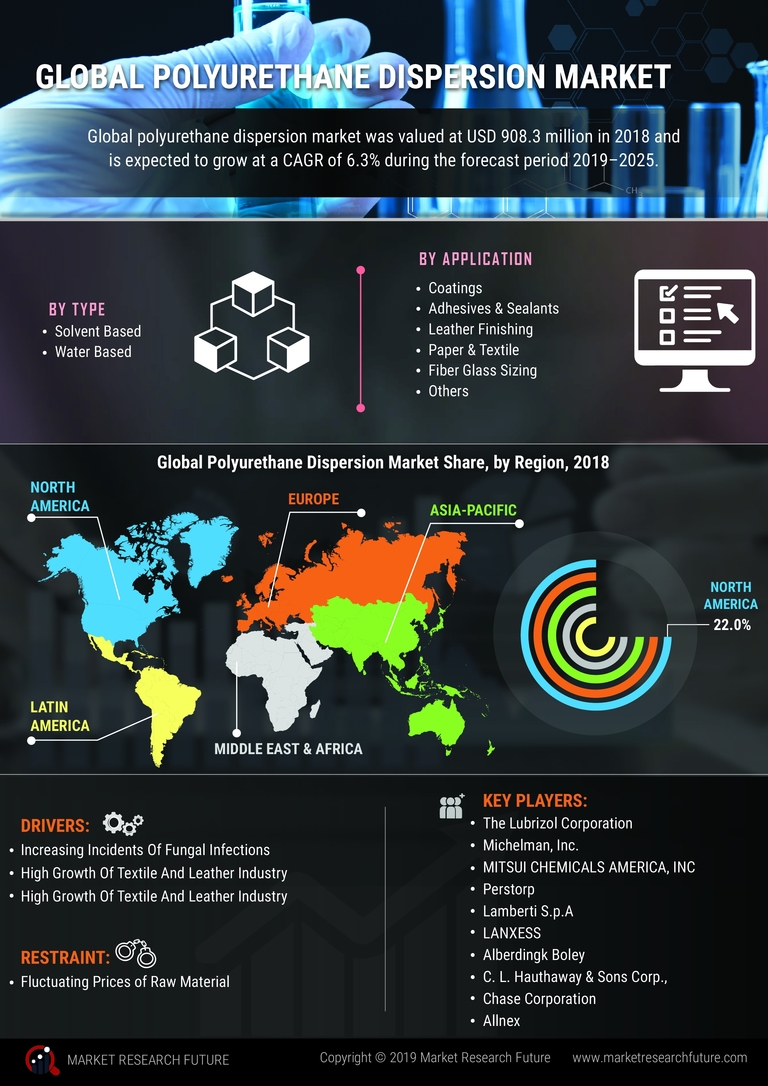 Polyurethane Dispersion Market Size was valued at USD 2.2 billion in 2021. The Polyurethane Dispersion Market industry is projected to grow from USD 2.3 Billion in 2022 to USD 3.8 billion by 2030, exhibiting a compound annual growth rate (CAGR) of 7.25% during the forecast period (2022 - 2030). Growing demand in the furniture and interior design industries, as well as high demand in the leather and textile industries. are the key market drivers enhancing market growth.

Moreover, due to growing demand from the interior design and furniture industries, the developing automotive industry, and growing consumer demand for leather goods, the market for polyurethane dispersions is growing significantly. The demand for leather is mostly driven by the fashion and footwear industries, in addition to its lucrative application in luggage. Demand for leather items has increased as a result of rising purchasing power and current fashion trends. PVC & concrete floor tops, textile coatings, and polyurethane dispersion, often known as PUD, are just a few of the amazing uses for this material. Excellent tensile strength, high elasticity, extreme temperature durability, and high abrasion resistance are only a few of its remarkable qualities. These factors will boost demand for polyurethane in the near future.

Additionally, the national part of the research also lists specific market-impacting variables and domestic market regulation changes that have an affect on the market's present and future tendencies. Data points including technical trends, porter's five forces analysis, case studies, and upstream and downstream value chain analyses are just a few of the indicators utilized to anticipate the market environment for certain nations. When giving prediction analysis of the country data, it also takes into account the presence and accessibility of international brands as well as the difficulties they encounter due to strong or weak competition from local and domestic brands, the influence of domestic tariffs, and trade routes.

By Region, the study provides market insights into North America, Europe, Asia-Pacific, and the Rest of the World. North America dominates the polyurethane dispersion market as a result of many government regulations, low labor costs, and ease of doing business, which has supported the rise of the leather, automotive, and other textile industries in this region.

Major market players are investing a lot of money in R&D to broaden their product offerings, which will spur further expansion of the polyurethane dispersion market. Market participants are also undertaking a variety of strategic measures to expand their footprint, with significant market developments including new product launches, contractual agreements, mergers and acquisitions, higher investments, and collaboration with other organizations. To grow and thrive in a market that is getting more competitive and growing, competitors in the polyurethane dispersion industry must offer products that are affordable.

Perstorp AB is a specialty chemicals company that specializes in poly alcohols, which are used to make resins for the coatings industry. In 2001, Sydsvenska Kemi AB purchased Perstorp. Its operations were combined with those of Neste Oxo, and the entire organization underwent a rebranding to Perstorp in 2002. There are five divisions that the business runs: Perstorp Performance Chemicals, Perstorp Coating Intermediates, Perstorp Oxo Intermediates, Perstorp Engineering Materials, and Perstorp Formox. In November 2019, Perstorp added two new grades to its Hymer line: n180, which has a shorter EO chain than n90, and n180, which has a longer EO chain. The new products are better for the environment and human health, and they open up possibilities for new applications. The product can be used to enhance the leather's surface texture.

Key Companies in the Polyurethane Dispersion Market include

In February 2021, Covestro announced plans for a new polyurethane dispersion production facility in China to meet the region's growing need for adhesives and coatings that are environmentally friendly. The business has set a 2024 completion date for this project.

In November 2018, in order to increase its market value in the European region and compete favorably in the polymer dispersion industry, the manufacturing company Covestro AG developed a new production facility in Germany. By giving customers high-quality items, the business was able to improve customer relations and carve out a niche for itself in the market.

How much is the Polyurethane Dispersion Market?

The polyurethane dispersion market size was valued at USD 2.2 Billion in 2021.

What is the growth rate of the polyurethane dispersion market?

The polyurethane dispersion market is projected to grow at a CAGR of 7.25% during the forecast period, 2022-2030.

Which region held the largest market share in the polyurethane dispersion market?

North America had the largest share in the polyurethane dispersion market

Who are the key players in the polyurethane dispersion market?

Which application based segment would dominate the polyurethane dispersion market?

The coating segment would take a change in the polyurethane dispersion market.

Polyurethane Dispersion: growing demand from the automotive industry is projected to boost the gl...