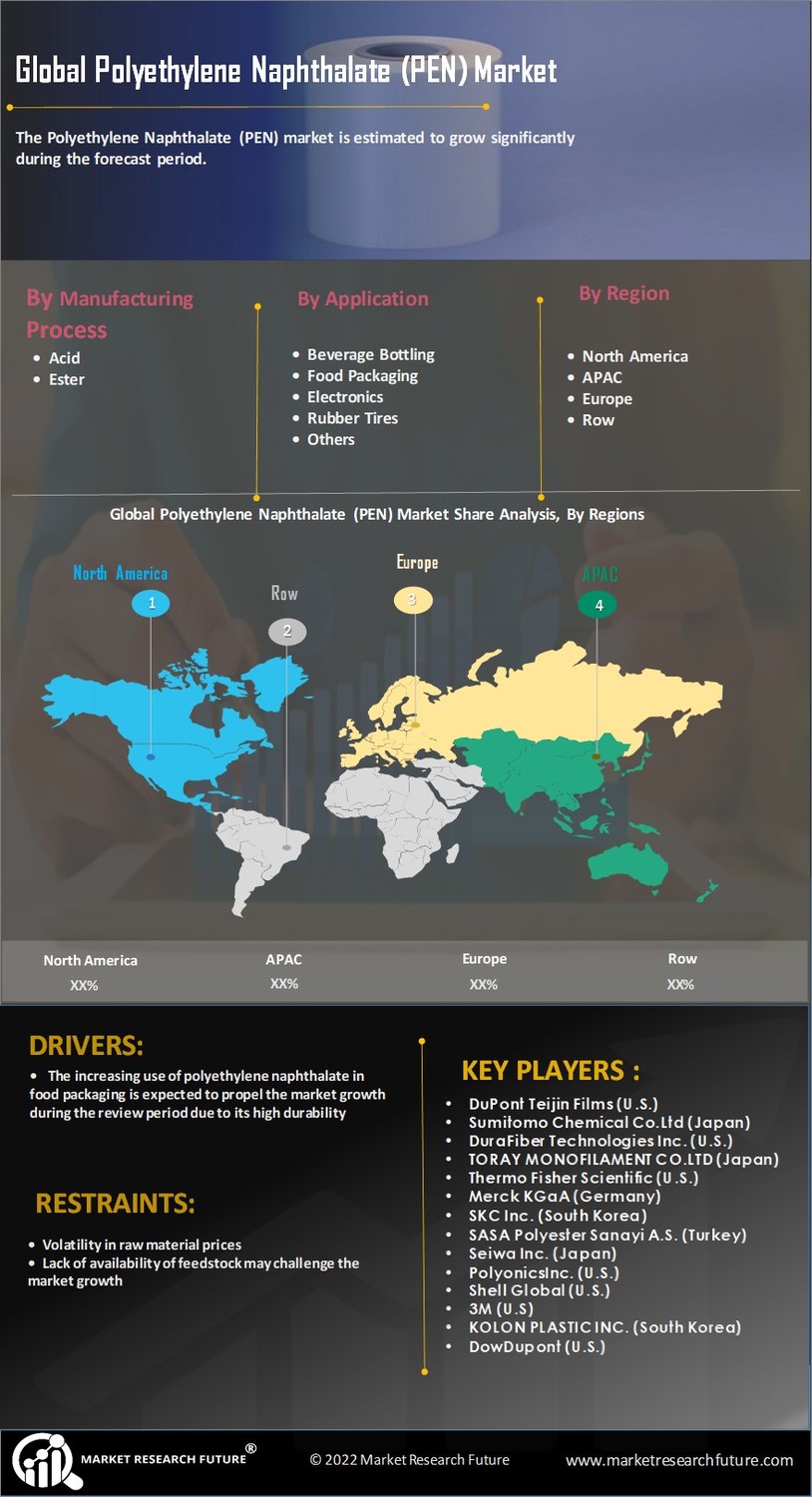 Polyethylene Naphthalate (PEN) is a polyester, which can be manufactured using an acid or an ester as a starting monomer. Ethylene glycol is the glycol monomer, common for both the manufacturing process. It exhibits superior properties such as high mechanical strength, dielectric strength, and good resistance to temperature, solvents, and chemicals.

Global Polyethylene Naphthalate Market is primarily driven by the increasing use of polyethylene naphthalate in packaging applications to improve the thermal and barrier properties. The increasing use of polyethylene naphthalate in food packaging is expected to propel the market growth during the review period due to its high durability and resistance to chemicals and solvents. The U.S. Food and Drug Administration (FDA) and the Japanese Ministry of Health, Labor & Welfare (MHLW) have approved the use of recycled plastic products such as polyethylene terephthalate (PET) and polyethylene naphthalate (PEN) in food packaging, which is expected to augment the demand for PEN in the food packaging applications. These recycled plastic polyester are used in packaging due to their reduced energy consumption, low cost, and reduced environmental impact. Apart from packaging applications, PEN is widely used in films and pellet form to manufacture electronic parts due to high thermal and mechanical properties. Thus, the demand for PEN in electronics is projected to drive the market further. Growing use of the product in the manufacturing of high performance and rigid rubber tire is likely to boost the demand in the automotive industry over the assessment period. Additionally, increasing demand for the product in solar cell protection is expected to offer substantial opportunities due to the initiation of several renewable energy projects such as Huainan’s Floating Solar Farm in China and Tesla Puerto Rico Solar Facility. However, the volatility in raw material prices and the lack of availability of feedstock may challenge the market growth. 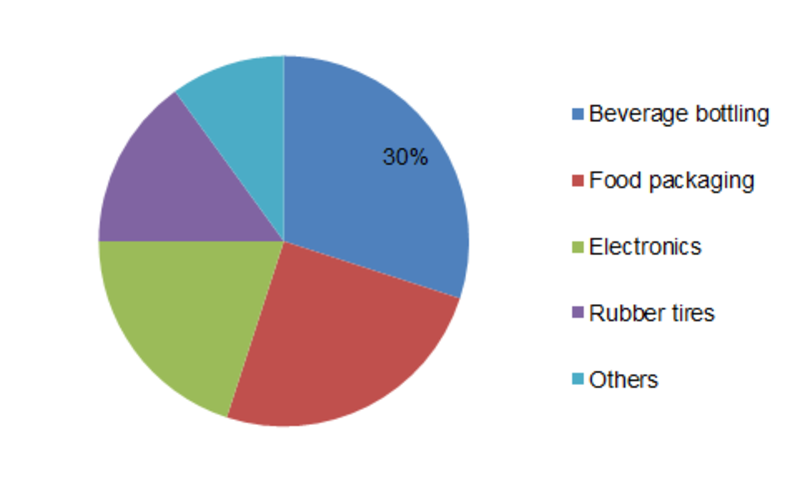 North America is leading the Polyethylene Naphthalate Market on account of the high production and consumption of polyethylene naphthalate in the U.S. Furthermore, expanding food & beverage industry in the region is likely to influence the market growth positively. The increasing demand for the product in automotive and electronics sector is expected to fuel the market growth further.

Asia Pacific is the fastest emerging region in the Polyethylene Naphthalate Market due to growing demand from major end-use industries such as packaging, automotive, and electronics. The availability of raw materials at a lower price in this region is an added advantage to the market growth.

Europe is expected to grow owing to the high penetration of the product in the manufacturing of automotive parts, especially in Western European countries such as France, the U.K, Italy, and others.

The Latin American Polyethylene Naphthalate Market is expected to witness a significant growth owing to changing consumption pattern and growing automotive and electronics industries in the region.

The Middle East & Africa region is projected to offer various opportunities to increase the Polyethylene Naphthalate Market Growth due to the expanding yet untapped market region over the assessment period.

The Polyethylene Naphthalate Market is segmented by Manufacturing Process and Application.

Based on the Manufacturing Process, the Polyethylene Naphthalate Market is segmented into acid and ester.

Based on the Application, the Polyethylene Naphthalate Market is segmented into beverage bottling, food packaging, electronics, rubber tires, and others.

PEN is a polyester that can be manufactured from ethylene glycol. It is mainly used in packaging applications.

What are the major applications of PEN?

The growing demand for food packaging is the major driver for the PEN market.

North America is the dominant regional segment of the global PEN market.

Leading players in the PEN market include Toray, DuPont Teijin, and Sumitomo, among others.