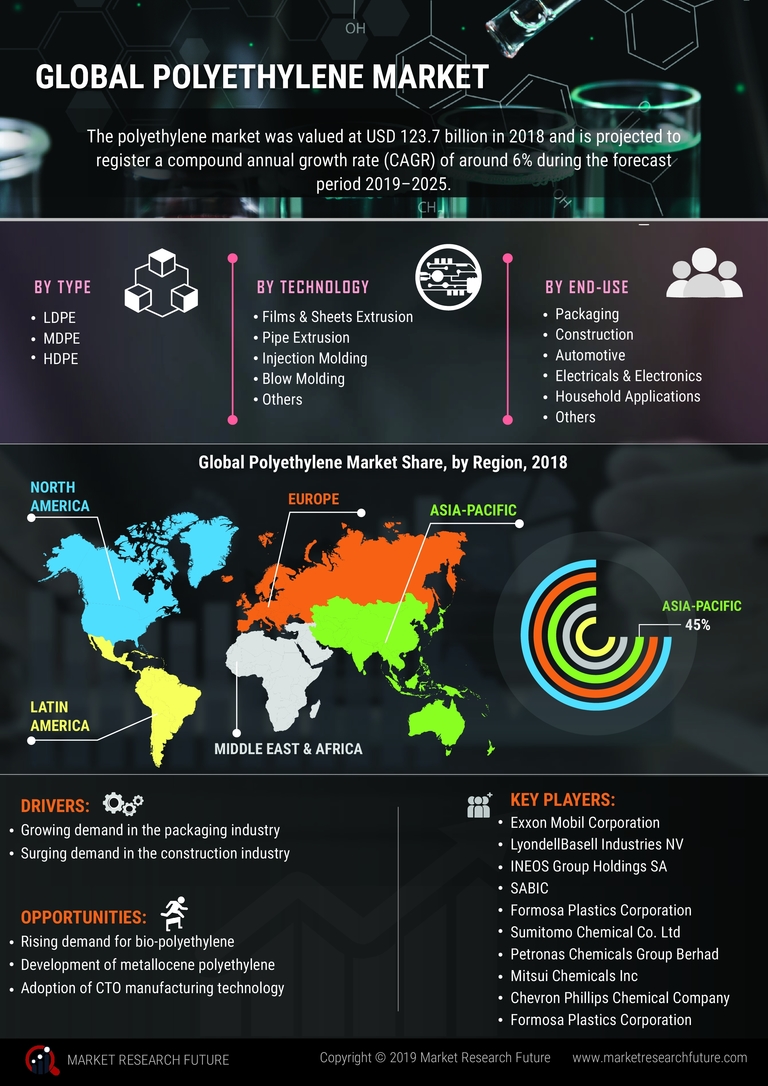 Polyethylene (PE), also known as polythene, is a group belonging to the thermoplastic polymers, and based on its polymerization process, it can be produced for different purposes.

The polyethylene market value was hampered due to the global outbreak of the coronavirus pandemic. The market was witnessing an inability to meet the demand and the imposition of strict norms and lockdown added to the adversity that was already being faced by the market.

However, the upcoming years predict that the market has a good fortune both in terms of value and quality. The rising investments in the production of environmentally friendly goods will help the market grow and attain an excellent market value by the end of the period in 2028.

To get a comprehensive and acute idea about the polyethylene market insights, it is very important to create a competitive environment amongst the different prime players present at different market locations all around the world. All the market players are engaging themselves in various types of strategies such as product launches and upgrades, mergers and acquisitions, partnerships, etc. The most valuable players of this market are:-

The agricultural sector that is functioning as a part of the polyethylene market size is anticipated to make a reliable contribution in the development of the market owing to the rising demand for nozzles and drippers in the irrigation field and functions. The increasing production of microtubes and emitting pipes is likely to play a salient role in helping to develop the global market at an international scale. In addition, there has been a surge in the demand which is resulting in enhancing the manufacturing process of toys and other consumer commodities like fashion apparel, and sports goods. This is another prominent factor that is anticipated to act as another salient factor that can strengthen the polyethylene market trends during the forecast period that will be ending in 2028. The market is witnessing the introduction and development of bio-degradable polyethylene which is believed to present the market with excellent opportunities during the forecast period.

The polyethylene market share is likely to face some challenges while on the path of its growth, as well. The growing need for environmental protection and health awareness is expected to cause hindrances to the market growth predicted for the forecast period that will be ending in 2028. There has been an increase in the imposition of stringent rules and regulations that are expected to restrain the market from growing. Also, the unstable fluctuating prices of the raw materials essential for production are likely to harm the growth prospects for the market during the forecast period.

The global polyethylene market trends are anticipated to have an excellent expansion and witness a significant rise during the ongoing forecast period of 2021-2028. The main aim behind this effective growth is owing to the rising degree of demand for packaged goods across an array of industries and consumer groups. Besides this, PE is emerging as a cost-effective solution, and the ongoing developments on the market products and presented portfolio to make it eco-friendly and beneficial for the environment are expected to strengthen the market functioning in the assessment period that will be ending in 2028.

Polyethylene market share is expected to witness significant growth owing to the performance of different market segments. Among these, the low-density polyethylene (LDPE) segment will be the fastest-growing and also contribute towards this market growth more than any other segment. It will be valued at USD 97,157.2 million with a cagr growth of 6.01% by the end of the forecast period. The packaging segment will also witness significant growth with a cagr of 6.12%. For a magnifying use the market has been segmented into the following on different bases:

Based on end-user,
it has construction, packaging, automotive, household applications, electrical & electronics, others.


The polyethylene industry movement is extraordinarily working in 6 major regions of the world that is North America, Asia Pacific, Europe, Africa, South America, and the Middle East. Among all these regions, the Asian Pacific region will dominate this market and the reason for that is rapid urbanization and industrialization. Secondly, the rapid expansion of food and beverages, packaging, infrastructure, and construction industries are expected to make a major contribution towards the growth of this market in this region. The growth of this market in the APAC region will be led by its developing nations such as India, China, and Japan. Europe will come up as the second-largest market of polyethylene with a cagr of 5.53% during the forecast period. The North American region is also anticipated to witness significant growth during the forecast period due to the increasing development of the automotive, electrical & electronics, packaging, and healthcare & pharmaceuticals sector. The Middle East and Latin America region is also anticipated to witness steady growth owing to the growing demand for packaging, construction materials, and consumer goods.

October 2021- A controversial project proposed by Westcoast Olefins (WCL) has been terminated.
Ken James, CEO of WCL, states the Polyethylene Plant initially scheduled for the BCR Industrial Site will not proceed. The CEO confirmed plans are still in place for the NGL Extraction Plant suggested for agricultural land in Pineview.
The 5.6 billion dollar Polyethylene Plant will no longer move ahead amid serious concerns from the environmental law department at the University of Victoria and conflicts with local first nations.

November 2021- Charter Next Generation and NOVA Chemicals Corporation announced a substantial landmark in the large-scale use of post-consumer resin (PCR) for elastic film applications. Both the companies have effectively collaborated to boost the supply of more sustainable films for packaging and develop a circular economy where valued plastic materials are reprocessed to be used again and again. Railcar extents of PCR reached CNG’s manufacturing facilities in October.

December 2020 : A new chemical process developed at the University of California, Berkeley, can convert polyethylene plastic into a strong and valuable adhesive.

The report qualitatively surveys the market and covers the market functioning based on the following market aspects:

The polyethylene industry report represents a drift analysis that talks about market drivers, opportunities, and restraints that are available in the global market. The report also discusses the impact of the covid-19 outbreak on the prominent players functioning as a part of the global market. The report also informs the potential market investors about the market segmentation on a global basis and how the factors that give rise to a competitive environment in various market regions as the actions of the key market players around the globe. At last, the report discloses and highlights some prominent recent developments in this industry that have taken place during or before the period.

How big the polyethylene market is expected to be by 2028?

What CAGR would the polyethylene market achieve during the forecast period of 2021 to 2028?

The global polyethylene market would mark progress with 5.82% CAGR during the forecast period encompassing 2021 to 2028.

Which type-based segment has the dominating power over the polyethylene market?

The low-density polyethylene (LDPE) segment would fetch the maximum revenue for the global polyethylene market.

Which technology to drive the polyethylene market the most?

By end-user, which segment has the maximum polyethylene market share?

The packaging segment is the dominating force for the polyethylene market.

Exxon Mobil Corporation (US), LyondellBasell Industries NV (Netherlands), China Petroleum Corporation (China), INEOS Group Holdings SA (UK), and DowDuPont (US) collectively holds the largest market share of the global polyethylene market. There is intense competition among these players to capture the largest market share in the global market. These players are implementing various strategies such as capacity expansions, supply/distribution agreements, mergers & acquisitions, investments, product launches, technology transfers, and joint ventures to maintain their market dominance and increase global presence. Among them, expansions, technology transfer, and acquisition, were the most widely used growth strategies in 2017.

Exxon Mobil Corporation is the leading producer and innovator of polyethylene products. The company operates through three segments–upstream, downstream, and chemicals. In August 2018, Exxon Mobil planned to greatly expand the plastic production at Texas with an investment of USD 1.9 billion. Additionally, in October 2017, the company started production on first of the two newly constructed high-performance polyethylene lines at its plastics plant in Mont Belvieu, Texas (US). Furthermore, in November 2016, the company expanded the production capacity of its polyethylene plant by 65%, to meet the growing polyethylene demand across the globe. These expansions were carried out to strengthen its position in global market and meet the increasing demand for polyethylene products.

LyondellBasell Industries NV, a company engaged in the refining and production of plastic resins and other chemicals. The company is the largest producer of polyethylene in Europe with 4.8 billion pounds per year of capacity. In August 2018, LyondellBasell acquired A. Schulman, Inc., a leading global supplier of high-performance plastic compounds, composites, and powders for USD 2.25 billion to maintain its position in the global polyethylene market.

China Petrochemical Corporation, is involved in the exploration, development, and production of crude oil and natural gas. It operates through following segments: exploration and production; refining; marketing and distribution; chemicals; and corporate and others. In September 2017, the company signed a contract with Kaji Technology Corp. (Japan) to supply equipment to its long-planned Sino-Kuwait integrated refining and petrochemical complex. This integrated project had investment of USD 9 billion.  This agreement was done to cater the growing demand for polyethylene products and increase their market share in the global market.

INEOS Group Holdings SA (INEOS) manufactures and sells petrochemicals, specialty chemicals, and oil products, worldwide. The company operates in three segments: olefins and polymers Europe, olefins and polymers North America, and chemical intermediates. In October 2014, European subsidiary of INEOS signed a distribution agreement with Biesterfield Plastic GmbH, to supply polypropylene and polyethylene in the Russian and Ukrainian market. This agreement is expected to cater the growing demand of polyethylene products in Russian and Ukrainian market and thus strengthen the company’s market position in the global polyethylene market.

DowDuPont is a holding company, which operates through three business segments—agriculture, materials science, and specialty products. In October 2017, the company started up its new integrated facility for ethylene monomer and Elite enhanced polyethylene at Texas. This expansion is expected to strengthen its position in the market and increase its share in the global polyethylene market.