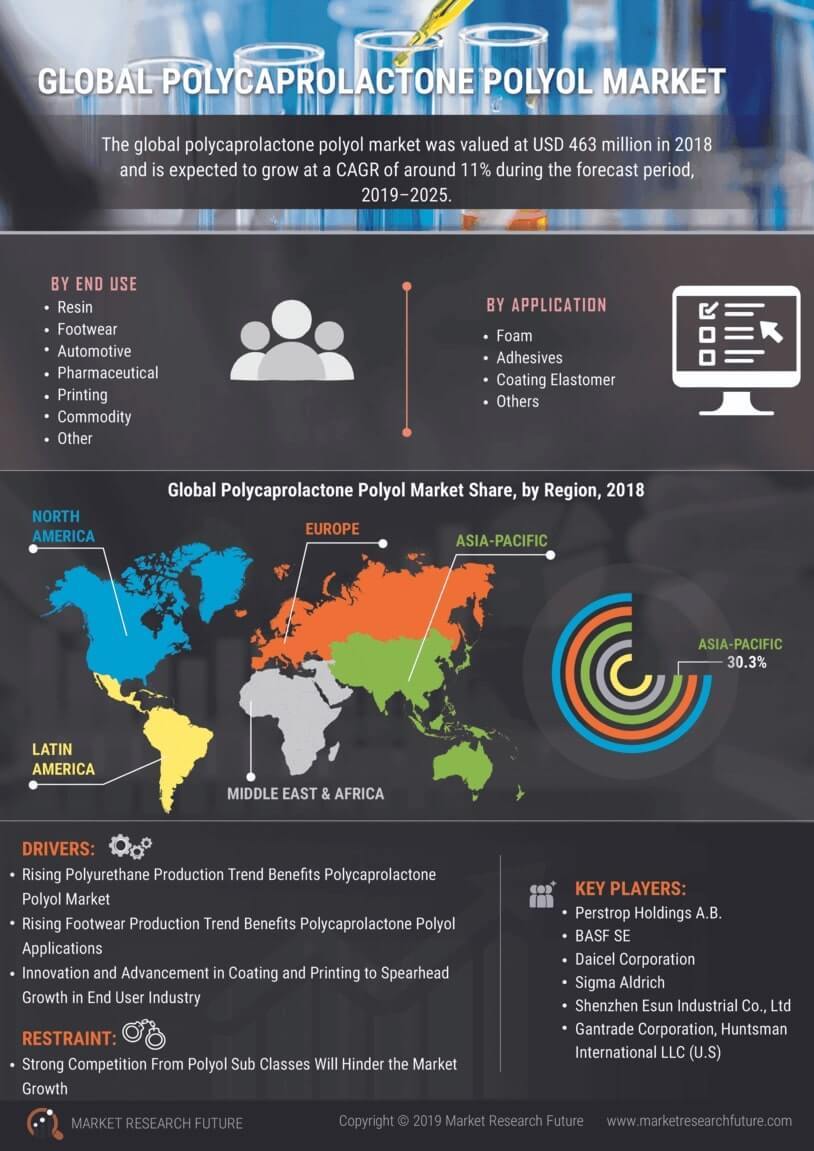 The stringent rules and regulations imposed during the outbreak of COVID-19 have led to certain instabilities in the supply and demand, which has hampered the growth of the polycaprolactone polyol market. The need for polycaprolactone in TPU applications has been affected significantly. However, the players are taking various initiatives to mitigate losses incurred during the pandemic period.

Biodegradable Nature of Polycaprolactone Polyol to Boost the Market

The growing application of the compound in various end-user sectors owing to its biodegradable nature is expected to be a significant factor that can drive the market during the analysis timeframe. The biodegradable attribute of the compound has resulted in its usage in the healthcare sector, such as; orthopedic, drug delivery, wound dressings, implants, etc. It is also one of the highly adopted raw materials in the synthesis of thermoplastic polyurethane due to its resistance to oil & grease, wear-resistant, UV-resistance, and low-temperature flexibility. Furthermore, the growing approvals by various regulatory bodies for the application of the compound are anticipated to be another salient cause that can drive the growth of the market during the forecast period.

Growing Restrictions on Non-Biodegradable Polyol to Restrict the Market

The polycaprolactone polyol manufacturers are likely to face various restrictions due to the rising bans on non-biodegradable polyol.

Fluctuations in Raw Materials Prices to Hamper the Market Growth

The increasing fluctuations in raw materials prices are expected to be a significant factor that can boost the market growth during the forecast period.

Growing Competition from Petroleum-Based Polyols to Pose a Significant Challenge

The growing competition from petroleum-based polyols and the strict regulations imposed by certain regulatory bodies are anticipated to be a significant challenge that can affect the market growth during the assessment timeframe.

MRFR asserts that the global polycaprolactone polyol market can witness notable growth while expanding at a CAGR of 2019 to 2025. The biodegradable nature of the compound is expected to be the most salient factor that is aiding in the market expansion in the analysis timeframe.

In the application segment of the global polycaprolactone polyol market, the coating elastomer segment is anticipated to lead the market during the projection timeframe.

In the end-user segment of the global polycaprolactone polyol market, the automotive segment is estimated to gain significant traction during the review timeframe. The pharmaceutical segment is also expected to grow significantly during the analysis timeframe.

APAC is projected to be the largest market share during the analysis tenure. The region is estimated to acquire the highest CAGR of 11.58% during the analysis timeframe. The expansion of the region can be attributed to the rapid development of various end-user sectors. The market is anticipated to flourish in the assessment time due to the introduction of various polymers for a sustainable lifestyle.

Europe is estimated to grow at a CAGR of 11.48% during the assessment timeframe. The growth of the market in the region can be accredited to the notable consumption of foam, coating, and adhesive-based products. Countries such as; the UK, Germany, and others are predicted to make a salient contribution in developing the market in the coming time.

North America is estimated to expand at a CAGR of 11.18% during the forecast period. The increasing demand for coating based application is expected to be a significant factor that can augment the market during the forecast period. Countries such as; the U.S. and Canada are expected to make a salient contribution in the coming time. The increasing application of biodegradable compounds in various end-user sectors is anticipated to be a crucial reason that may develop the market in the analysis timeframe.

Rest of the World to Acquire the Least Market Share

The RoW is anticipated to acquire the least market share during the forecast period. The region is expected to grow at a slower pace than the other regions. The expansion of the region can be attributed to the increasing demand for foam-based applications. In addition, the increasing initiatives taken by the government to promote biodegradable plastics is expected to boost the market in the region.

Various players are adopting strategies such as; collaboration, mergers, acquisition, and more to gain a higher position in the global market while also focusing on expanding their consumer base. The increasing demand for biodegradable compound has led to higher demand for innovation for which players are focusing on the launch of new products.

Feb 2022 - Ingevity is preparing to start producing caprolactone polyols at its DeRidder, Louisiana factory. It plans to enhance the global production capacity for the polyols sold under the Capa brand by 40%. Construction is anticipated to commence by summer, with operations beginning in the first quarter of 2022. Monomer storage capacity will be included in the project, which will help speed bulk shipments to customers in the United States. A ring-opening polymerization reaction is used in the production process. This enables the monomer to be derivatized into various polyols and thermoplastics with added value. Another investment in Capa, a Warrington, United Kingdom-based innovation center, should be operating by the end of the year. It will contain application development equipment and testing capabilities. The DeRidder factory modifications will better position Ingevity to meet rising global demand for Capa technologies while also improving the supply chain, reducing lead times, and improving overall service for clients worldwide.January 2021- Aqua Metals, Inc, a leading player who specializes in lead recycling with its AquaRefining technology, has announced that it has partnered with BASF SE, a German player, to supply electrolytes, cooperate commercially and explore technical improvements to enhance AquaRefining performance.

January 2021- Air Liquide and BASF SE has signed a contract in South Korea;s Yeosu National Industrial Complex to extend the term of their existing agreements. The first contract between the two players was signed 20 years ago. Since then, Air Liquide has expanded its industrial reach in the Yeosu basin.

The report on the market provides an in-depth study of the market during the analysis timeframe. The report comprises various segments, analysis of the trends, and factors playing an important role in augmenting the market. The market dynamics consist of drivers, opportunities, challenges, constraints, which bring a significant impact on the industry. The report provides a holistic view of the development of the market with respect to revenue throughout the forecast tenure. Some of the significant factors studied in the report consist of the influence of the mounting population on a worldwide level, the technical development, and the dynamics of demand and supply in the market. The market study also highlights the impact of government initiatives and the competitive landscape of the global market during the review period. Further, the report also comprises the impact of COVID-19 on the market.

How much is the global polycaprolactone polyol market worth in the future?

The valuation of the global polycaprolactone polyol market is projected to reach USD 700 MN by 2023.

At what CAGR is the global polycaprolactone polyol market projected to grow in the forecast period (2016-2023)?

The valuation of the global polycaprolactone polyol market is estimated to expand at 11.28% during the forecast period (2016 – 2023).

What are the major tailwinds pushing the growth of the global polycaprolactone polyol market?

Which region holds the largest share in the global polycaprolactone polyol market?

Who are the top players in the global polycaprolactone polyol market?