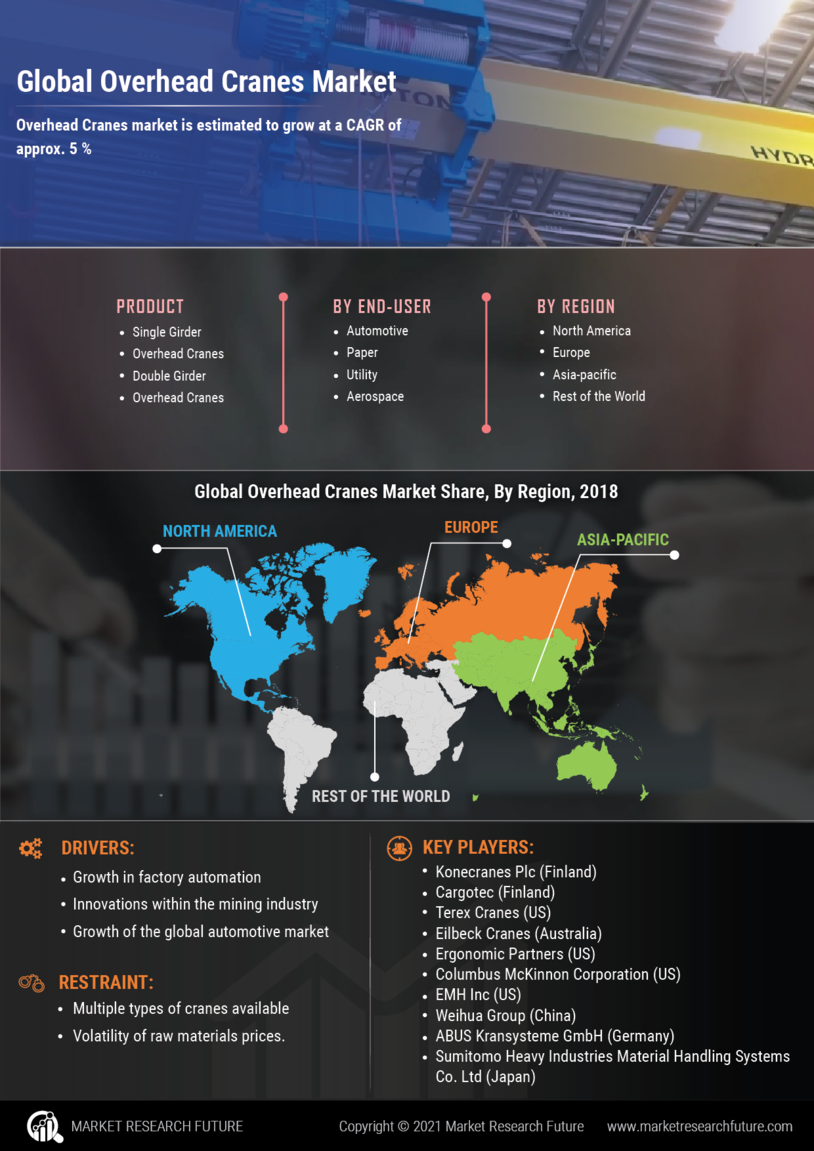 Overhead Cranes Market Size was valued at USD 5649.5 million in 2021. The Overhead Cranes Marke industry is projected to grow from USD 5878.86 million in 2022 to USD 7767.48 million by 2030, exhibiting a compound annual growth rate (CAGR) of 4.06 % during the forecast period (2022 - 2030). Expansion of factory automation and new developments in the mining sector are the key market drivers enhancing market growth.

Few phenomena in the twenty-first century have had the same influence on society, the environment, and the economy as increasing urbanization. In just a few decades, the world's power dynamics have changed due to a continual flow of people leaving the countryside and moving into growing metropolitan areas. The number of people living in cities worldwide has increased nearly six-fold since 1950, from 751 million to 4.2 billion in 2018. The East Coast of the United States and Mexico both exhibit strong urban expansion in the video for North America as a whole.

The need for overhead cranes is driven by the rising level of automation in various industrial spaces. The industrial sector's productivity in the manufacturing process and decrease in lead time for production are both increased by the automation of labor-intensive procedures like lifting and moving heavy objects. The benefits of the overhead crane industry and developments in crane technology give industries more confidence in their utilization because these cranes are affordable and completely safe to use when transporting large items. For example, 34% of the 123 readers who participated in Modern Materials Handling's 2021 Automation Solutions Study in February 2021 work for organizations with less than $10 million, while 18% work for businesses with revenues of $10 million to $49.9 million. 28% of respondents work in non-manufacturing fields, including warehousing, retail, or third-party logistics, whereas 59% are employed in the manufacturing sector. This year saw an increase in labeling automation from 13% to 16%, and a third of the respondents said they used hoists, cranes, and monorails.

Due to the need for capital-based investment and ongoing expenses, the infrastructure gap is a significant problem in almost every country in the world. According to the Infrastructure Hub (GIH), in 2020, there was a USD 15 trillion investment gap between the current investments in 56 different countries across seven sectors, including energy, telecommunication, airport, road, rail, ports, and water, which were valued at USD 79 trillion and USD 94 trillion, respectively. The GIH is attempting to entice investments from private and public companies through the G20 initiatives to close the infrastructure deficit. Other emerging nations are concentrating on public-private partnerships (PPPs) to create infrastructure including Mexico, Vietnam, India, and others. The state government of Maharashtra, India, and the US-based real estate company Warburg Pincus inked a contract in November 2020 for the U.S. real estate company to invest USD 578.8 million to build 11 industrial and logistics parks in Pune and Mumbai. Such events are anticipated to increase demand for overhead cranes and considerably propel the market for these devices.

Therefore, the quick move toward urbanization has increased the market CAGR ly in recent years. In developed economies like Europe and North America, the demand for Overhead Cranes Market is anticipated to increase due to urbanization. The income from the overhead cranes market revenue is anticipated to be greatly influenced by these factors.

Based on product type, the Overhead Cranes segmentation includes Automotive, Paper, Utility, Aerospace, and Others. The main sector, automotive, is anticipated to expand at a CAGR of 5% throughout the projection period. The overhead crane industry is quite effective for use in the automobile sector. Depending on the need and the crane's lifting capabilities, it can be used to lift and transport anything from individual auto components to a fully constructed vehicle. The procedure is optimized since there is less reliance on human labor and movement on the work floor. Additionally, employee safety has been a major trend among automakers, supporting the usage of overhead lifting tools including overhead cranes, vacuum lifters, and hoists.

By Region, the study provides market insights into North America, Europe, Asia-Pacific and the Rest of the World. Asia Pacific Overhead Cranes Market accounted for USD 2587.47 million in 2021 and is expected to exhibit a significant CAGR growth during the study period. A lot of space for growth exists in nations like India, South Korea, Vietnam, and others due to their rapid infrastructural development. In addition, a number of North American corporations have moved their manufacturing outside of China as a result of the US-China trade conflict. The American Chamber of Commerce claims that because there is a large labor pool and low land costs, investing in this is very beneficial. Gross domestic product (GDP) growth rates in nations like Vietnam, Thailand, Malaysia, Indonesia, and others are strong, as is worker productivity. These factors are anticipated to fuel the Asia-Pacific market overhead cranes market.

The Europe Overhead cranes market is currently dominated, which is expected to develop at a CAGR of 4.7% to reach USD 1,340 million by 2030. Overhead crane production is concentrated in Europe. Most of the European market is dominated by four enormous corporations. The demand for overhead cranes in Europe is quite consistent, while the demand from China is lower, which boosts local manufacturers' sales. Additionally, businesses are employing alliances and acquisitions to get a significant portion of the European overhead cranes industry. For instance, the Finnish business Konecranes Plc. Acquired around half of the overhead cranes manufacturer MHE-Demag. These factors impact the expansion of the overhead cranes market in Europe. Moreover, Germany Overhead Cranes Market held the largest market share, and the U.K. Overhead Cranes Market was the fastest-growing market in this Region.

Major market companies are spending a lot of money on R&D to diversify their product lines, propelling the industry's further expansion. Market participants are engaging in a variety of strategic activities to increase their presence in conjunction with significant industry changes, including new product releases, contractual agreements, mergers and acquisitions, increased investments, and collaboration with other organizations. Businesses in the Overhead Cranes industry area must offer cheap items if they want to expand and prosper in an environment where market development is booming, and competition is intense.

With its headquarters in Hyvinkää, Konecranes Oyj (formerly KCI Konecranes) is a Finnish company specializing in the production and repair of cranes and lifting apparatus as well as the maintenance of machine tools. One out of every ten cranes produced worldwide is made by this company, with the remaining 20% being used at ports and roughly 80% going to manufacturers. Konecranes, a renowned producer of cranes in Finland, has introduced three new series of overhead cranes. With the installation of new smart technology, Konecranes' new S, C, and M series provide creative solutions for many sectors.

Key Companies in the Overhead Cranes Market include

April 2021: The Weihua Group established a new plant in Henan, China. At its new facility, the company-built office buildings, restaurants, bulk materials workshops, electrical assembly workshops, smart light-duty crane workshops, etc. All of these projects were finished on time. When integrating crane systems into machinery and equipment, automatic robotic systems, cloud computing, the Internet of Things, and artificial intelligence are considered. With this new plant, the firm increased sales and income while expanding its crane machinery product line.

March 2021: Comansa created a 3D model of a crane for use with BIM (Building Information Modeling) systems and large towers. This 3D model illustrates building and infrastructure development, upkeep, and deconstruction procedures. Professionals with training and expertise designed the model while guaranteeing their total safety. An efficient demand for 3D models would result from efficient material handling and lifting that reached the greatest number of clients.

October 2020: Thailand received 15 sets of different cranes from Henan Yutian Crane Co. Ltd., including 50 tonnes, 125 tonnes, and 320 tonnes. The business assisted Thai businesses in producing more than 1.8 million tonnes of steel for construction. The company expanded its client base, engaged in more export business, and strengthened supply chain networks due to access to Thai customers.

How much is the Overhead Cranes market?

What is the growth rate of the Overhead Cranes market?

Which Region held the largest market share in the Overhead Cranes market?

Asia Pacific had the largest share of the Overhead Cranes market.

Which category had the largest market share based on end-user in the Overhead Cranes market?

Automotive had the largest share of the Overhead Cranes market.