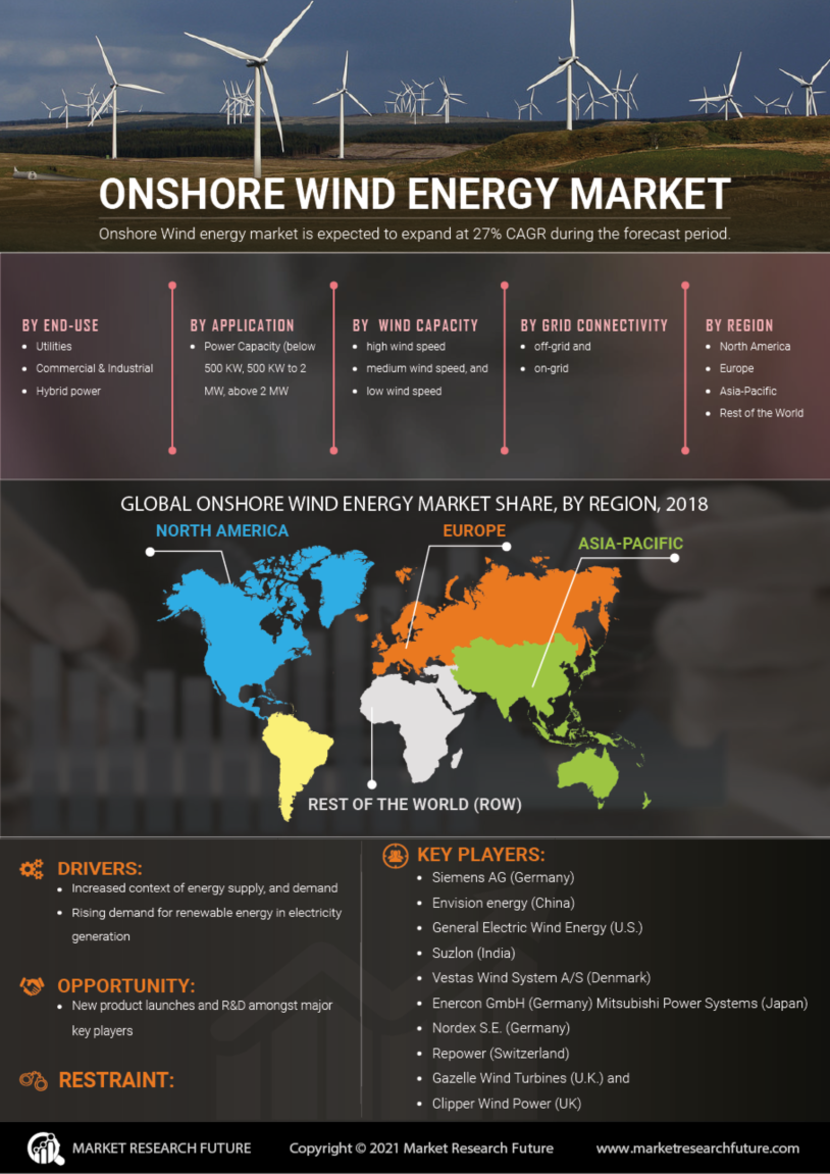 Onshore Wind energy market is expected to expand at 27% CAGR during the forecast period.

Global onshore wind market is expected to grow at a faster pace shortly, the main reasons being increased context of energy supply, and demand and rising demand for renewable energy in electricity generation mix. Global Wind Energy Council has estimated that there has been an increase of wind power from 92.4 GW in 2007 to 494.6 GW in 2017. This proves the promising future of wind power in the near future. Besides the increasing projects in the construction of wind farms and wind parks is driving the market. More wind farm projects from U.S. and China are witnessing the growth of wind power. However, higher outputs from offshore wind farm and more focus on offshore wind projects, is restraining the market.

Global onshore wind energy market is segmented based on power capacity, wind capacity, end-use, application, grid connectivity, and regions. Based on the wind capacity segment, the market is classified as high wind speed, medium wind speed, and low wind speed. Among these the high wind speed projects are expected to dominate the market as there are turbines, which operate individually and generate power of around 2.3 MW. On the basis of power capacity the market is segmented on the basis of generation capacity of the wind towers, such as, less than 500 KW, 500 KW to 2 MW, and more than 2 MW. The wind towers generating more than 2 MW, hold a major market share supported by the fact that new technologies are able to generate high capacity of wind. On the basis of end-use the market is classified as, Utilities, Hybrid power, Commercial & Industrial, and others. Utilities are the prime shareholder as there is increasing demand for electricity from the nations. Based on application, the segments are, system stability, peak power management, frequency response, demand response, and power storage. With increasing demand of electricity in peak hours and peak seasons, the demand is fulfilled by the electricity generated by onshore wind farms and thus peak power management application is expected to dominate the market. On the basis of grid connectivity, the market is classified as off-grid and on-grid. By region type, the market is segmented into the four geographies of North America, Europe, Asia Pacific, and Rest of World.

Onshore wind energy market is anticipated to have huge growth over the forecast period by continuously innovating in technology coupled with more demand for wind farms construction and increasing demand for electricity. The market is also expected to have high expansion and technological activities by major players in the industry.

Wind power is the electricity generated from the wind energy which is converted into electrical energy with the help of rotors and generators. Since the growth of renewables is maximum in the current scenario, wind energy is gaining attention from power generators. Wind energy has capability to generate a higher capacity of electricity than other renewable sources. Wind farms and wind parks are created to optimize the wind energy to the maximum and generate approximately 6 to 8 MW of power. For instance Gansu Wind Farm of China has the capacity to produce 6.8 MW of power. Innovation in the wind turbine sector is shaping the onshore wind energy scenario with focus on Leveled Cost of electricity. Siemens has come up with a direct drive concept of wind energy, which has fewer components and consequently cuts down the costs of maintenance.

What is the projected market value of the global onshore wind energy market?

The global onshore wind energy market is expected to record a substantial market valuation due to the increasing innovations and technological integration in wind turbines.

What is the estimated growth rate of the global onshore wind energy market?

The global onshore wind energy market is projected to register a moderate 27% CAGR in the forecast period.

What is the wind capacity segment of the global onshore wind energy market expected to witness the highest growth?

The high wind speed segment is slated to expand as the fastest-growing segment.

What is the end-user segment of the global onshore wind energy market expected to witness the highest growth?

The utilities segment is slated to expand as the fastest-growing segment.

Who are the key players operative in the global onshore wind energy market?

Onshore Wind Energy Market, Predicted To Grow At More Than 27% By 2027