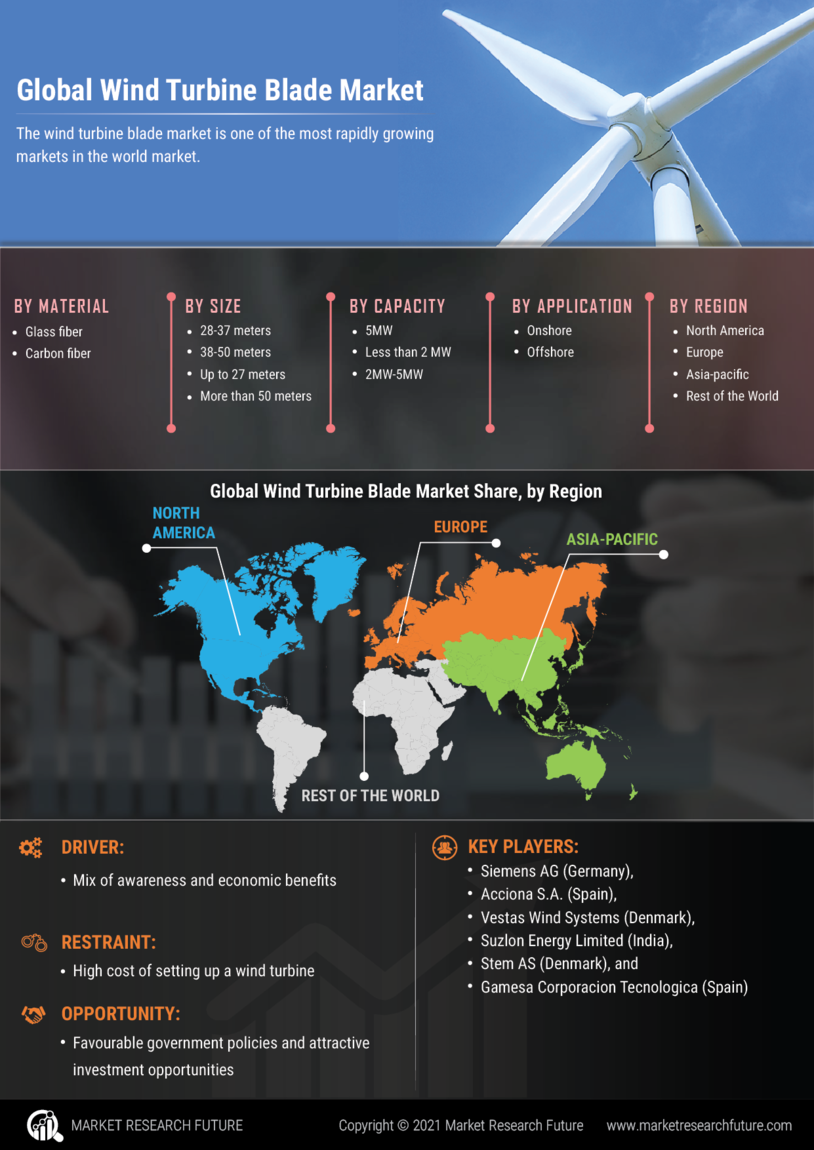 With a high CAGR and high Market Value, it is expected to flourish at a robust pace. The wind is a prevalent renewable source of energy. The wind turbines utilize this energy and are then utilized in various areas. The popularity of wind turbines has been increasing rapidly in the last few years due to wind usage, a renewable energy source.

The number of wind farms has increased many folds in the last few years, which indicates that the demand for renewable sources has been increased due to the shortage of non-renewable sources. Humankind has realized that they would run out of non-renewable sources very soon, so they have shifted their focus to those generated without any limits. The future for the market Revenue is very bright. It would undoubtedly reach a point where it can be relied upon entirely as a significant source of energy generation.

There is nothing more fearful than a body that is not healthy and a mind that is not at peace. COVID-19 era has taken almost both of them away from every individual across the globe. Also, the financial setbacks that the pandemic has brought would instead take decades to overcome. The reports prepared for the companies dealing with the Wind Turbine Blade Market Outlook give them insights into the current Market Size and the strategies to combat the losses.

Moreover, the pandemic period is not over yet. So it needs to be made sure the strategies are implemented in a way that helps the companies to change their working pattern so that it can be benefited to the greatest extent. The in-depth market analysis by the industry experts provides a detailed analysis of the market with the steps that need to be taken to smooth the organization.

All the major players in the market have been working together to bring growth to the market. The factor that has been hampering the market’s growth is the increased costs associated with the setup being considered and worked upon to make sure they can be reduced considerably. With the reduced setup costs, there would be numerous setups and would ultimately use the sources that would never get over. They have also been working on bringing the latest technology to the market. The acquisitions, collaborations, and mergers among the top players have also bought significant growth and expanded the horizons in the market.

The Wind Turbine Blade Market Trend is undoubtedly going to touch the sky owing to the increased awareness among humanity towards the efficient use of non-renewable sources and the increased use of renewable ones.

The major driving factors that have been responsible for bringing the Wind Turbine Blade Market Growth include the favorable policies from the governments that encourage the use of renewable energy resources to maintain a balance in the environment. Moreover, the cost of wind energy generation that has been declining is also one of the major factors responsible for the growth of the market trends.

No wonder the cost of wind energy production is declining rapidly, but the cost to set up the plant to generate the energy is still very high, which is one of the major restraints in the industry’s growth. It is not just about the installation but the load it is supposed to carry, location, and various other factors that tend to affect the cost of setting up a wind turbine.

The regulatory implications by the regulatory bodies and the governments worldwide have bought about a tremendous increase in the Wind Turbine Blade Market Size. The regulatory bodies have been trying to encourage the set up of such plants that use renewable sources of energy that would never come to an end, instead of the non-renewable ones, which have already been exploited to a great extent by the human race. Such policies have been boosting the industry’s growth and ensuring that the energy produces is used in the best possible way.

The wind turbine blades have variable sizes, depending on the type of plant set up and its load. Governments worldwide have been making sure that they cut down the prices for the industries as much as possible, but the very high initial setup cost has been hampering market growth to a great extent.

The market can be classified into the following subcategories:

Based on the material, the Wind Turbine Blade Industry has the following segments:

Based on the size

Based on the size, the market has the following subsections:

Based on the capacity

Based on the capacity, the market is divided into the following categories:

Based on the application, the  market has the following subtypes:

Based on the regions, the Wind Turbine Blade Industry has the following segments:

There has been an increased demand for wind energy in the countries like India, China, and Japan. These are also the regions that have been experiencing favorable laws from th governments to promote the setups of the wind turbines. Hence Asia-pacific dominates the Wind Turbine Blade Market Revenue due to all such mentioned reasons. Another reason behind the growth of the Global Market Value is the increase in awareness about the advantages of using a renewable source of energy to generate power that can be used in multiple fields.

Europe is also one of the major markets and is expected to gain the highest profit during the forecast period. The market outlook in Europe is attributed to favorable environmental circumstances and the increased demand in various industries.

Here is a list of recent advancements in the market:

The exclusive reports that have been prepared for the market have all the laments required for the smooth and efficient running of the business. It includes the overview of the market and the Wind Turbine Blade Market Analysis made by the industry experts about the effects of COVID-19 on the market and the steps that can be taken to combat the losses. It also has the details of the market dynamics, including growth, drivers, and market growth restraints.

The regulatory implications and market segmentation based on material, size, capacity, application, and region have been discussed in detail. Also, the major players in the market and the steps they have taking towards the growth of the market share have been discussed. The recent advancements in the market have also been included to make the companies self-analyze their current position and work on the areas where they lack focus. The overall business development planning is included in the report to guide the business owners and the staff at every step.

What are the key factors driving the wind turbine blade market?

Which region will lead the wind turbine blade market?

What are the different types of wind turbine blades?

Carbon fiber and glass fiber are the different types of wind turbine blades.

What are the different sizes of wind turbine blades available?