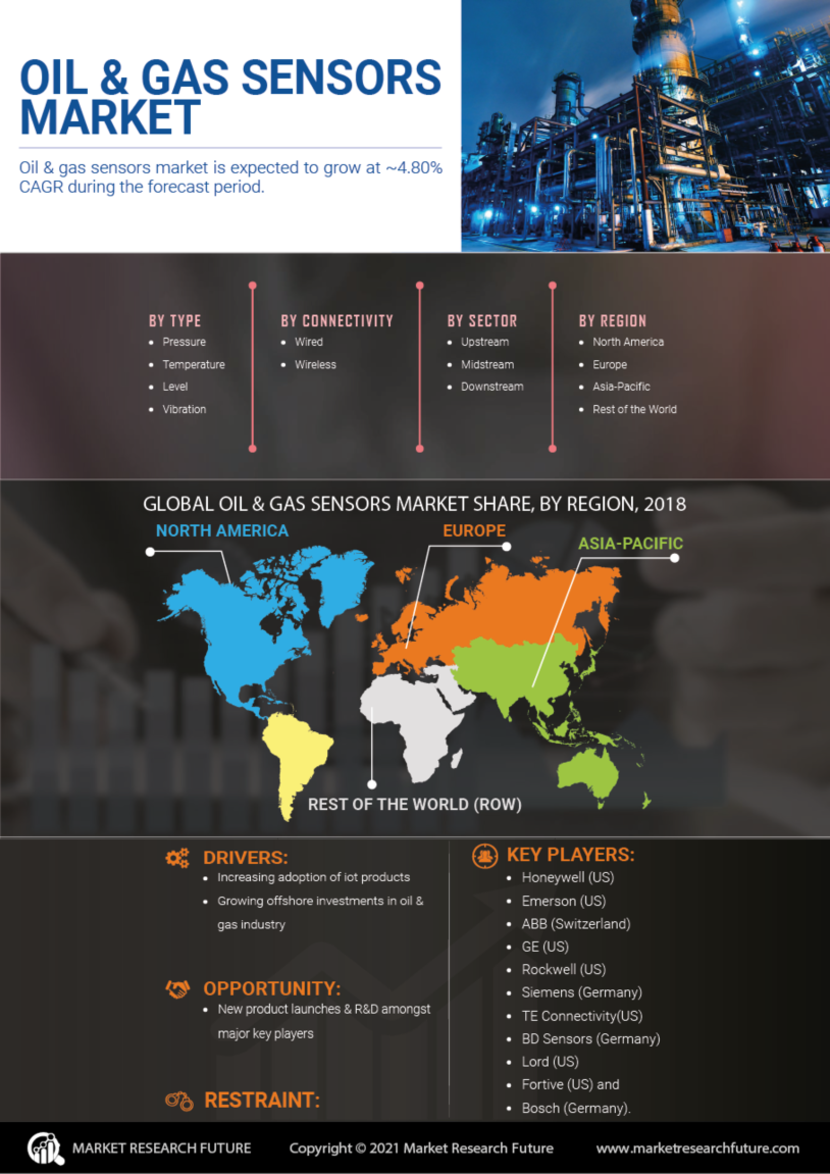 Oil & gas sensors market is expected to grow at USD 9.42 Billion 5.05% CAGR during the forecast period.

The global oil & gas sensors market is projected to grow at a high rate during the forecast period, mainly due to the growing demand for sensors due to refining capacity additions. According to IEA, oil demand is estimated to grow by 6.9 million barrels a day by 2023.  Thus, governments around the world have developed attractive investment plan to increase its refinery capacity which would further drive the growth of the global oil & gas sensor market. For instance, in 2018, Indian Oil Corporation plans to invest around USD 24.83 billion to increase its refinery capacity, improve its petrochemical production, expand gas business, and extend its pipeline network. Similarly, in May 2018, Abu Dhabi National Oil Company announced to invest USD 45 billion to expand its facility into one of the world’s largest refining and petrochemical plants which would boost ADNOC’s refining capacity by 65% to 1.5 billion barrels per day by 2025. These investments would in turn drive the need for efficient sensors to record accurate data.

Global oil & gas sensors market is expected to witness substantial growth during the forecast period owing to growing offshore investments in oil & gas industry. According to IEA, offshore oil production is estimated to reach 27.4 million barrels of oil equivalent per day (mboe) by 2040 from 26.4 million barrels of oil equivalent per day (mboe) in 2016.  This would result increase in the demand for oil & gas sensors globally. North America holds the largest share in the oil & gas sensor market due to increased upstream spending which would boost the sensor demand in the countries such as US, Canada, and Mexico. Increasing unconventional drilling techniques offer opportunity for the oil & gas sensor market. For instance, Department of Energy would invest USD 30 million to increase the unconventional oil & gas recovery.  Europe holds the second largest share in the oil & gas sensors market with investment in refinery capacity addition and expansion of pipelines.

The global oil & gas sensors market is expected to grow at ~4.80% CAGR during the forecast period. 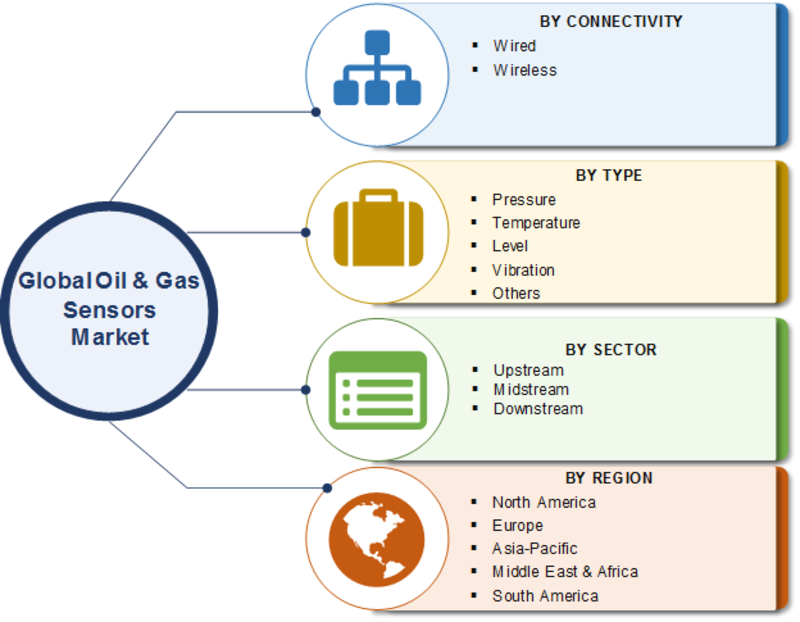 Oil & gas sensors are the detectors with IoT technology, offering high level of accuracy, reliability, and flexibility for various applications in the oil & gas industry such as remote monitoring, condition monitoring, and analysis & stimulation. Sensors are majorly used to detect pressure, level, and flow, and temperature.  With the increased growth of unconventional drilling, there is high demand for liquid level sensors in upstream sector. Similarly, according to the Bureau of Labor Statistics, the accident cases in the US during drilling and exploration activities were responsible for around 40% of the workforce deaths. Thus, the demand for oil & gas sensors are estimated to increase during the forecast period, in line with the safety standards mentioned by Application of Safety Instrumented Systems for the Process Industry, in 2017

Increasing adoption of IoT products is a major driver for the growth of the global oil & gas sensors market. Additionally, governments around the globe are developing policies to encourage the use of IoT technology to improve efficiency, downtime, and operating cost. According to Oxford Economics, oil & gas industry adoption of IoT could increase the global GDP by approximately USD 816 billion from 2018 to 2028.  Thus, accelerating the demand for sensors in oil & gas industry.

At what rate is the oil & gas sensors market expected to grow?

The oil & gas sensors market is poised to mark 4.8% CAGR.

By type, name the segments of the oil & gas sensors market.

The segments of the oil & gas sensors market, by type, are vibration sensor, pressure sensor, level sensor, temperature sensor, and others

Which type-based segment is projected to lead the growth of the oil & gas sensors market?

Based on sector, what are the segments of the oil & gas sensors market?

The segments of the oil & gas sensors market, on the basis of sector, are midstream, upstream, and downstream

Who are supposed to be the key players of the oil & gas sensors market?

The key players are Honeywell (US), ABB (Switzerland), Emerson (US), Fortive (US), GE (US), Rockwell (US), Siemens (Germany), BD Sensors (Germany), TE Connectivity(US), Lord (US), and Bosch (Germany).