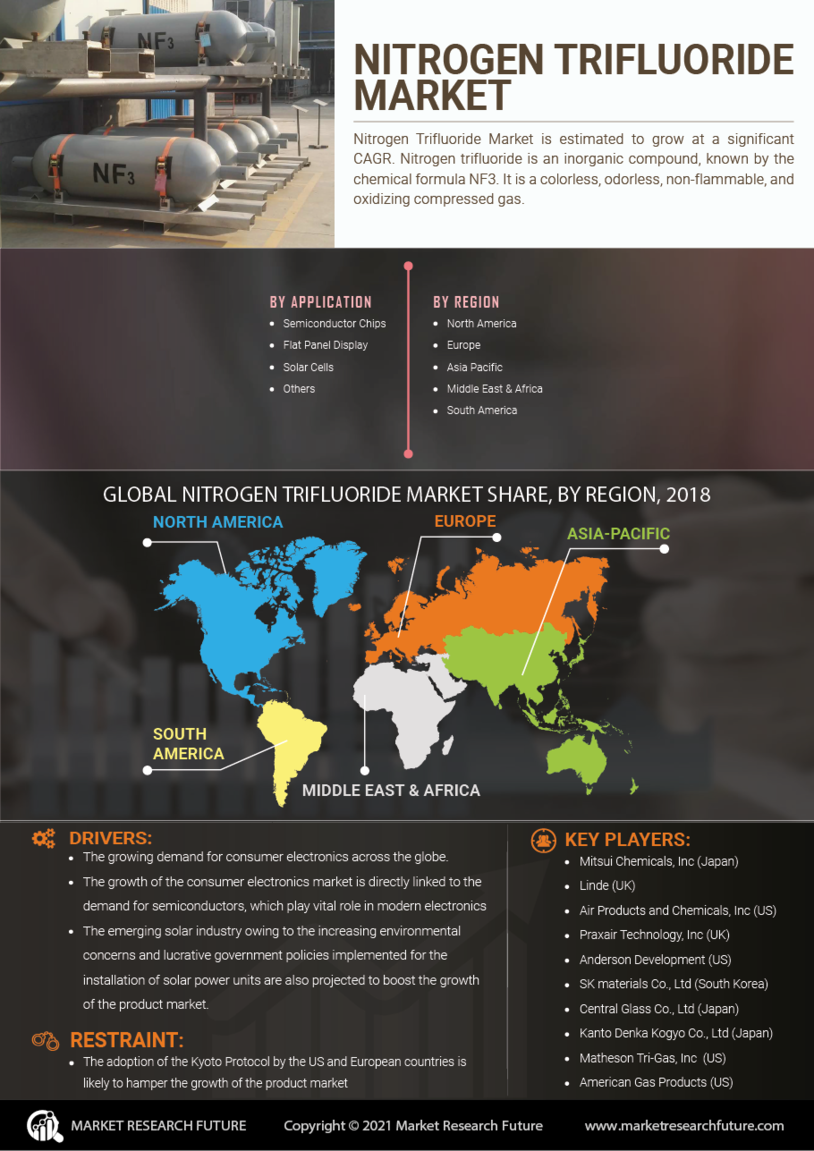 Nitrogen trifluoride is an inorganic compound,

known by the chemical formula NF3. It is a colorless, odorless, non-flammable, and oxidizing compressed gas. Thus, it is a safe gas to transport, store, and deliver to customers.  It finds vast end-use applications in the electronics industry as an etchant or cleaner. It offers higher etch rates, higher selectivity, carbon-free etching, and minimal residual contamination when compared to alternative cleaning agents available in the market. With these properties, it is used to clean manufacturing chambers of silicon chips/silicon wafers in the semiconductor industry. It is also used for cleaning chemical vapor deposition (CVD) chambers where large volumes of flat panel displays are manufactured to be used in laptops, mobile phones, digital cameras, camcorders, point-and-shoot cameras, pocket video cameras and LED televisions. Solar cells manufacturing facilities also use nitrogen trifluoride as a plasma etchant. The key growth driver to the growth of the global nitrogen trifluoride market is the growing demand for consumer electronics across the globe.

The growth of the consumer electronics market is directly linked to the demand for semiconductors, which play vital role in modern electronics, enabling advances in communications, computing, transportation, health care, defense, clean energy, as well as in emerging technologies such as artificial intelligence (AI), virtual reality (VR), and the Internet of Things (IoT), and flat panel displays, which are witnessing exponential growth in the recent days. Factors such as rising per-capita income, increasing consumer purchasing power, high emergence of the tech-savvy millennial population, and declining cost of consumer electronics items are supporting the market growth for consumer electronics in general across the globe, and which in turn is likely to boost the nitrogen trifluoride market during the coming years.

Furthermore, the emerging solar industry owing to the increasing environmental concerns and lucrative government policies implemented for the installation of solar power units are also projected to boost the growth of the product market. However, the Kyoto Protocol has recognized nitrogen trifluoride as a greenhouse gas and a significant contributor to global warming with GWP of 17,200 times greater than that of CO2, the second most GWP gas after sulfur hexafluoride (SF6). The adoption of the Kyoto Protocol by the US and European countries is likely to hamper the growth of the product market during the forecast period.

Moreover, due to its importance in the electronics industry, commercial technologies such as incineration or plasmas are undergoing R&D to capture nitrogen trifluoride in a facility’s gaseous effluent stream to avoid its contribution to the global warming. This is expected to provide growth opportunities to the players in the global nitrogen trifluoride market during the review period, 2019–2025.

Geographically, the global nitrogen trifluoride market has been studied with respect to five key regions, namely North America, Europe, Asia-Pacific, Latin America, and the Middle East & Africa. Asia-Pacific dominated the global nitrogen trifluoride market in 2018. The region is likely to continue its dominance during the forecast period. Some of the major electronics hubs, such as Japan, South Korea, and Taiwan, as well as due to the growing electronics demand from the emerging economies, such as China and India are driving the growth of the product market in the region. Rising per capita disposable income, increasing consumer spending, rising need for smart built up and thinner systems, and lucrative government initiatives are some of the factors contributing to the growth of the electronics industry in the region. China’s electronics industry, for instance, is also growing at an exponential rate due to the supportive government policies, strong domestic market demand and the opportunities provided by the international transfer of technology in the electronics manufacturing sector. The export-oriented approach of China is also driving the country’s electronics industry. For instance, the prevalence of major market players such as Huawei Technologies, Xiaomi technology, OPPO, and Vivo communication technology, whose products are witnessing strong international demand due to their affordable costs. Similarly, the Indian electronics industry is showcasing remarkable growth in recent days due to increasing domestic demand and an ongoing shift to an end-to-end manufacturing ecosystem.

Government policies such as the National Policy on Electronics (NPE), Modified Special Incentive Package Scheme (M-SIPS), Electronics Development Fund (EDF), and Preferential Market Access (PMA) are encouraging the manufacturing of electronic products in the country. In addition to this, the Make in India and Digital India initiatives are expected to boost the growth of the Indian electronics industry during the forecast period. As per MRFR analysis, the Indian electronics market was valued at USD 212.40 billion in 2017 and is expected to register a CAGR of 25% to reach USD 265.50 billion by 2018. Furthermore, due to continuous population expansion in countries such as India and China, the demand for energy is increasing at a rapid pace, which is propelling the demand for solar energy demand in the region. This is emerging as a clean power source owing to the long-term benefits, which, in turn, is fueling the demand for the product. The market in North America held the second-largest market share in 2018, which is further trailed by Europe. However, due to the stringent environmental rules and regulations in these regions, the demand for nitrogen trifluoride is likely to get affected during the forecast period. The markets in the Middle East & Africa and Latin America are also expected to witness healthy growth during the forecast period.

July 2021- a prominent worldwide provider of silicon-carbon composite materials, Group14 Technologies, and a global leading producer of industrial gases and special gases, SK materials, have announced that they are forming a joint venture to develop an industrial unit in South Korea to produce lithium-silicon battery materials. The step is considered being the latest advancement by Group14 to guarantee double sourcing for the company’s patented lithium-silicon technology.

A subsidiary of SK Group, SK materials, as per the terms of the joint venture, will invest over USD52million in building a production center for battery materials in South Korea projected to start in the year 2022.

SK materials Co Ltd is a Korean firm involved in producing and selling special gases. The firm produces nitrogen trifluoride (NF3) that is infused to eradicate any deposit present on the inside of the chemical vapor deposition (CVD) chamber; silane (SiH4) that is utilized for the deposition of silicon on the wafer in semiconductors and also to deposit silicon on TFT on top of glass substrates for TFT-LCD.

What would be the key contributor for the nitrogen trifluoride market growth?

What are the applications included in the nitrogen trifluoride market report?

The applications included in the nitrogen trifluoride market report are flat panel displays, solar cells, semiconductors chip, and others.

Which region would dominate the nitrogen trifluoride market?

Asia Pacific would lead the charge for the nitrogen trifluoride market.

What was the Indian nitrogen trifluoride market valuation in 2018?

What are the companies associated with the nitrogen trifluoride market?