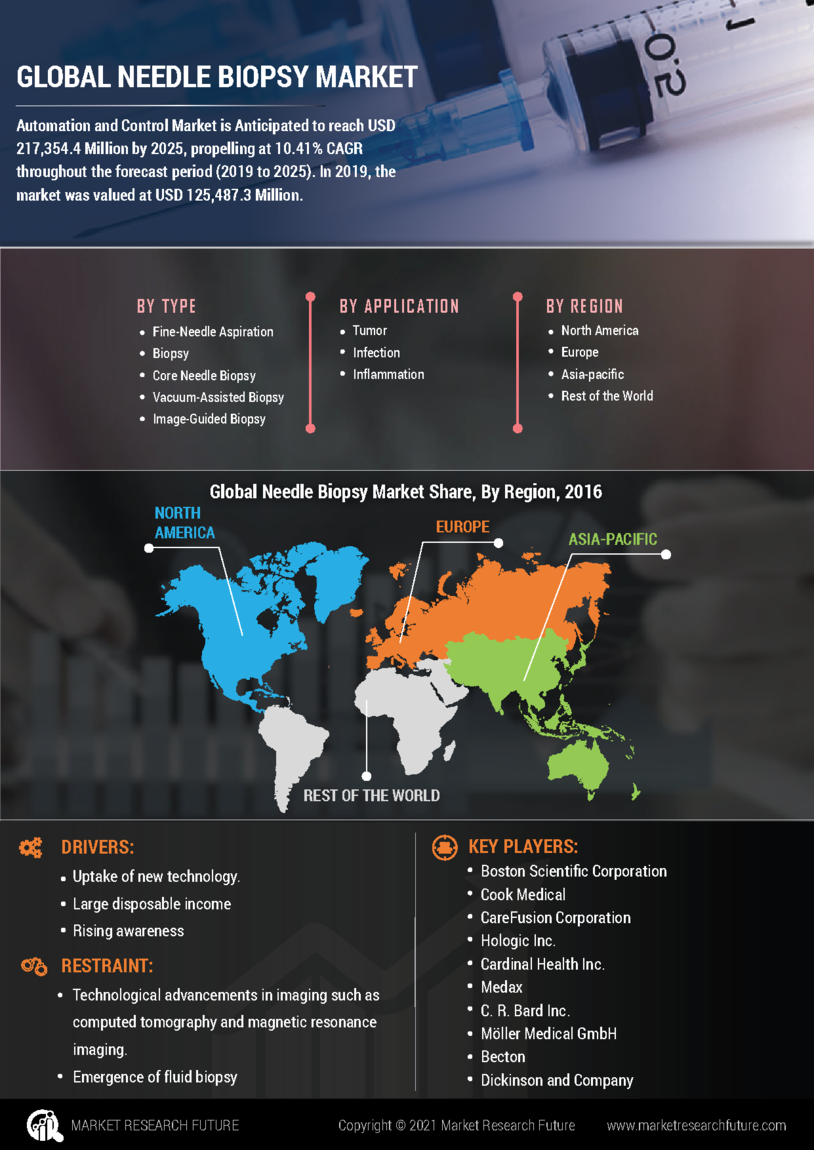 The Needle Biopsy Market is projected to reach USD 24,421.3 Million by 2030 at 12.5% CAGR during the forecast period 2022-2030. Needle biopsy is a process that involves inserting a needle into the proper sampling location to remove a sample of cells from the body. The removed tissue is then tested in a laboratory to see whether there are any abnormalities. A needle biopsy is typically performed to diagnose symptoms such as a tumor or lump, inflammation, or infection. For more exact findings, computed tomography or ultrasound are sometimes used in conjunction with a needle biopsy. Market limitations include the development of ultrasensitive imaging technologies such as Magnetic Resonance Imaging (MRI), Computed Tomography (CT), and others. The development of liquid biopsy, on the other hand, is the single greatest danger to needle biopsy's future.

A Needle Biopsy is a technique that involves inserting a needle into the proper sampling location to remove a sample of cells from the body. The tissue is then tested in the lab to see whether there are any abnormalities. Because of market drivers such as malignancies and infections, the needle biopsy market is increasing. The rising prevalence of breast and lung cancer is one of the major factors predicted to drive the needle biopsy market's growth and demand. Furthermore, the fast rise in demand for minimally invasive operations, as well as numerous initiatives made by governments and worldwide health organizations, are expected to drive development in the needle biopsy market from 2022 to 2030. Similarly, fast technical improvement and development, as well as increased awareness about early diagnosis of breast cancer, are expected to drive market expansion.

This report contains all the information on the needle biopsy market strengths. The report also contains the culmination of dynamics, segmentation, key players, regional analysis, and other important factors. And a detailed analysis of the global needle biopsy industry analysis and forecast for 2030 is also included in the report.

The Needle Biopsy market study analyses the Covid-19 limitations put on business owners, investors, and others. The geographical and regional impacts fluctuate often due to the fact that locks are done differently in different areas and nations. This research examines current market effects in the short and long term, assisting decision-makers in developing short and long-term company plans across geographies.


The needle biopsy market is primarily driven by product production and the decrease in raw material and component prices. Rising cancer incidence and the increased usage of biopsy needles are driving market development. Companies should focus on increasing distribution quality to alleviate pricing pressures caused by enormous market fragmentation. Distribution agreements between large players and new items, such as multi-layer needles, would be extremely advantageous. The growing worldwide elderly populations, as well as government initiatives to raise cancer awareness, are projected to drive kidney biopsy market growth.


The introduction of needle biopsy and promising clinical studies, as well as an improved reimbursement environment, are projected to provide substantial growth opportunities for the needle biopsy market from 2021 to 2028.


The needle biopsy market is expected to be challenged by the underdeveloped healthcare infrastructure and lack of resources in developing countries.

Similarly, according to the Canadian Cancer Society, on average, 72 women were diagnosed with breast cancer in Canada per day in 2017, while 14 women died from cancer every day. As a result, the demand for and utility of needle biopsy devices market would expand, aiding the needle biopsy market growth.

Fine aspiration needle biopsy and needle core biopsy are the two most common types of needle biopsies. A hollow needle measuring 11 to 18 gauge is used to remove a sample of tissue from the liver, breast, prostate, and other organs during a core biopsy needle. The area is numbed with local anesthetic until the tissue sample is taken. To get only a little piece of the injured region, fine needle aspiration biopsy generally requires a small hollow needle ranging from 22–27 gauge. Thyroid samples are most often processed via fine needle biopsy. The vacuum-assisted aspiration and biopsy needle market are projected to be the fastest expanding. Rising cancer screening rates throughout the world would boost the industry. Breast cancer is predicted to be the most often used form of cancer for a needle biopsy.

The market is segmented on the basis of types, applications, and regions. The needle biopsy market is expected to witness decent growth during the forecast period.

Based on the application, the market is segmented into tumor, infection, inflammation, and others.

Based on the propulsion types, the needle biopsy market is segmented into fine-needle aspiration biopsy, core needle biopsy, vacuum-assisted biopsy, and image-guided biopsy.

According to the reports, on the basis of regions, the needle biopsy market is divided into North America, Europe, Asia Pacific, Latin America, and the middle east & Africa (MEA). The United States has the largest needle biopsy market share due to attractive reimbursement situations and higher healthcare spending. The speedier market adoption of new technologies in the United States is also a significant driver of the needle biopsy market. Due to high spending money and growing awareness, Europe is the second-largest market. Because of huge unmet demands, the Asia Pacific area is the fastest expanding, headed by China and India. The Gulf countries, notably Saudi Arabia and the United Arab Emirates, dominate the Middle East and Africa markets. Due to poor economic and political situations, as well as low healthcare penetration, Africa's impoverished areas are anticipated to lag.

Many players are targeting needle-based biopsy guns as a lucrative approach. Fine needle aspiration biopsy is less efficient and detectable than a core needle biopsy. The use of core needle biopsy in conjunction with needle aspiration biopsy to obtain maximum sensitivity and detectability is becoming more common. As a result, the two tests are complementary, and when both tests are run simultaneously, the efficiency rate is greatest.

In 2017, an average of 72 women were diagnosed with breast cancer in Canada every day, according to the Canadian Cancer Society, while 14 women died of cancer each day. As a result, demand for and utility of needle biopsy would increase, assisting needle biopsy market growth.

What Is The Predicted CAGR of The Needle Biopsy Market For The Forecast Period of 2022-2030?

The Needle Biopsy Market CAGR Would be 12.5% During The Forecast Period.

What Is The Projected Valuation Of The Needle Biopsy Market By 2030?

Which Is The Largest Market In The North American region?

The US is the largest North American market.

Name The Players Involved In The Needle Biopsy Market.

The Liquid Biopsy Market Could Be A Substitute For The Market And Deter Its Growth.

Global Needle Biopsy Market Is Growing At a Rate Of 5.2 % During The Forecast Period