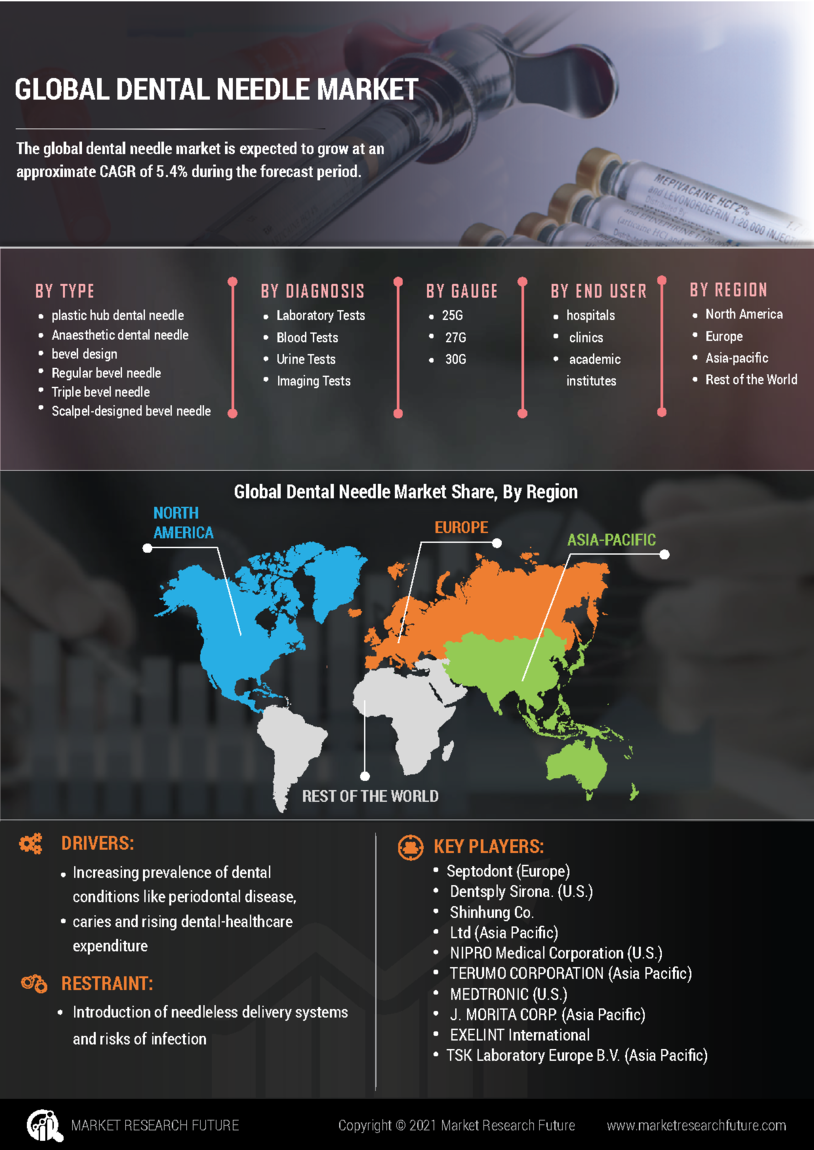 Dental needles and syringes are used in a variety of dental surgeries and in the common practice of removing and filling in cavities.

COVID-19 may be remembered as the most dangerous virus that the 21st century saw. It had magical and negative powers in that this simple virus that was shaped like a crown could give many people who got it respiratory issues. It also killed a few people. But what made people fear it the most was the fact that those who recovered could get it again soon afterward and that people who made a complete recovery often suffered from serious and permanent health complications.

Governments knew early on that they had to contain the spread of the virus. That’s why they imposed lockdowns and quarantines. These didn’t last long since they didn’t really work. In any case, most companies in most industries around the world were hard hit either by no or slow production. The companies in the dental syringes market were no exception.

Most people around the world have never been to a dentist in their life. Many more have never seen the dentist regularly. Well, many of these people are becoming rich enough to afford to see the dentist at least periodically. This, along with the fact that dental diseases like gum disease and tooth loss are driving growth in the Dental Needle Market. These people need to have more surgical procedures done and more cavities to be filled to protect their gums and teeth.

Many people are suffering from vitamin deficiencies, most notably vitamins D and A. it is leading to a growing prevalence in terms of gingivitis and other gum/periodontal diseases and tooth/gum loss. Also, a growing number of people are eating more fast food and junk food at restaurants. This is causing more tooth and gum problems.

The number of elderly people around the world is rising rapidly. This is leading to more of a demand for dental surgery and procedures due to a growing number of dental and teeth issues.

There are many technological advancements in the Dental Needle Market. It has resulted from many companies in the dental syringes market investing heavily in research and development. They are coming up with many new devices with innovative uses and applications. This is also propelling growth in the industry.

What is holding back growth in the Dental Needle Market is the introduction of drug delivery systems that don’t need needles and the growing awareness of and desire to avoid infection risks.

Perhaps the greatest challenge that companies in the Dental Needle Market are the fact that many governments around the world (especially America’s) are imposing stricter regulations on the usage and design of dental needles. These are being imposed in light of the recent growth in awareness regarding the potential dangers of needle use in dental surgery due to the risk of infection.

Dental needle manufacturers need to find ways to make their needles safer to reduce the risk of infection while keeping their price points in the range that most people will be able to afford.

Dentsply Sirona is a major American player in the global Dental Needle Market. It became an industry leader by investing heavily in research and development. This allowed it to develop and market a new generation of products that were superior to their predecessors and had more innovative and useful applications. It was also able to sell these products at slightly higher price points because of their superior quality. Dentsply Sirona was able to create a sustainable competitive advantage because of this.

The global Dental Needle Market can be grouped into many different sub-segments based on type:

The global Dental Needle Market can be grouped into many different sub-segments based on gauge:

The global Dental Needle Market can be grouped into many different sub-segments based on length:

The global Dental Needle Market can be grouped into many different sub-segments based on end-user:

The Dental Needle Market in America is the largest in terms of size. This is because of an advanced and developed healthcare sector. The American government and private American healthcare companies also spend a lot of money on healthcare for Americans. Also, the prevalence and incidence of dental issues and problems are rising in America. It’s primarily due to a rapidly aging population and the fact that most Americans don’t eat healthily.

The Canadian market is like the American market in terms of Dental Needle Market size. The Canadian government spends lavishly on health care for its citizens. In fact, Canada has a socialized healthcare system. This means that it spends even more on its citizens than the American government does. Canada also has an elaborate network of private health insurance companies that offer health and dental insurance plans with rich benefits for its citizens.

Canada and the United States of America also have many companies in the Dental Needle Market and in the dental industry in general. This is also what accounts for its large market share.

The European Union also has a large population - these people need dental work done. Europeans are also aging much faster than the general population is. Thus, the need for dental needles is rising rapidly. The governments in the European Union are spending much more on healthcare for these reasons.

The Asia-Pacific region has the third-largest Dental Needle Market size. What’s accounting for this is the fact that the region is getting richer in general. The Asia-Pacific region is also home to two economies with large and rapidly growing populations - India and China. This, combined with the fact that Asians are better educated and now more aware of dental hygiene and health, translates into increased government spending in the region.

The elderly population is growing dramatically in the Asia-Pacific region. This is also driving growth in the Dental Needle Market.

The Middle East and North Africa have the weakest growth rates in the Dental Needle Market. There are many factors accounting for this. One is the fact that most economies and nations in this region are poverty-stricken. Also, the governments don’t spend a lot on healthcare, the populations are relatively young, and the populations are uneducated.

The Dental Needle Market is very competitive and fragmented. The industry in general has a high CAGR. it is also very lucrative and has few barriers to entry. Many companies find that they have to invest in research and development to develop and market the products that will give them the sustainable competitive advantage that they need to become and stay profitable.

Other companies find that strategic partnerships and mergers/acquisitions with other successful companies accomplish the same thing.

Medtronic is a major American player in the global Dental Needle Market. It has been successful by investing heavily in research and development. This allowed it to develop and market innovative new products that gave it a sustainable competitive advantage.

The CAGR for the Dental Needle Market is projected to be 5.4% for the time period that this report covers. The Market is expected to be worth more than USD 7.4 billion in 2026. This is up from its worth of USD 7.44 billion in 2018. The Americas have the highest market share followed by the European Union and the Asia-Pacific region respectively.

At what CAGR is the dental needle market projected to grow during the forecast period?

Dental needle market is projected to grow at a 6.1% CAGR during the forecast period.

Which region is expected to dominate the dental needle market?

The Americas is expected to dominate the dental needle market.

What are the different types of dental needle?

What are the factors that may limit the dental needle market growth?

Risk of infection and availability of needleless delivery systems are factors that may limit the dental needle market growth.

Who are the key players profiled in the dental needle market?