Naphthalene is a white crystalline organic aromatic compound. It is very volatile and sublimes slowly at room temperature. Naphthalene is derived from coal tar and petroleum fractions during refining. Various artificially synthesized naphthalene compounds are used as precursors in the production of other chemicals. For instance, naphthalene sulfonic acids are used in synthesis of various dyestuffs, pharmaceuticals, and other chemicals. In addition, it also finds applications in several end-use industries such as textile, building & construction, rubber, and agrochemical.

In addition to this, the increasing use of naphthalene-based compounds as dye dispersing agents and intermediates in the preparation of synthetic dyes in textile industry is further creating lucrative opportunities for the players operating in the global naphthalene market.

However, acute exposure of naphthalene and its subsequent derivates can cause health-related hazards such as cataract, hemolytic anemia, retinal hemorrhage, and cancer, which is likely to hamper its growth of the market. Additionally, the stringent government regulations regarding the use of naphthalene and derivatives are expected to pose a threat to global naphthalene market. For instance, on account of VOC emissions and health issues related to naphthalene, the European Union (EU) has banned the supply of naphthalene-based products since 2008. 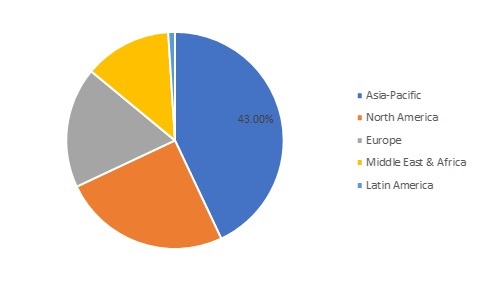 The market in Asia-Pacific dominates the naphthalene market and is projected to register highest the CAGR during the forecast period owing to the rising industrialization and rapid constructional activities in the region. This is largely attributed to the increase in demand for naphthalene derivatives such as naphthalene sulfonate formaldehyde (NFS) in concrete admixtures and to manufacture plasterboards. Additionally, the augmenting use of naphthalene products in the production of fumigant insecticides on account of vast arable lands coupled with rising demand for high-quality crop protection chemicals is expected to drive the regional market demand. China is the largest consumer of naphthalene in the region. Moreover, the growing exports of pesticides from the country is further propelling the naphthalene demand. For instance, in 2017, the total export value for pesticides in China reached USD 6,760 million, with the insecticide segment comprising 28.2% of the total export volume. Furthermore, India and other Southeast Asian countries are propelling the naphthalene market growth in the region.

North America accounted for a substantial market share in 2018. The growing demand for plasticizer to produce concrete and plasterboards for constructional applications coupled with the rising residential and commercial activities in the US is expected to drive the market. In addition, the use of naphthalene in the production of various intermediates in pharmaceutical and coatings industry is further augmenting the growth.

The European regional market is expected to register moderate growth during the forecast period owing to the consumption of naphthalene sulfonates as constructional additives coupled with the expansion activities carried out by major players. For instance, in 2017, BASF SE commissioned a new plant in Saint Petersburg to produce concrete additives based on lignosulfonates and naphthalene sulfonates and others. However, the escalating environmental concerns in Eastern Europe is obstructing the regional growth of the naphthalene market.

Latin America and the Middle East & Africa are expected to show substantial growth during the forecast period owing to the increasing construction activities and growing industrialization in the region.

The global naphthalene market has been segmented based on source, application, end-use industry, and region.

By source, the global market has been bifurcated into coal tar and petroleum.

Based on application, the global market has been categorized as plasticizer, pesticide, surfactant & wetting agent, and others.

Based on end-use industry, the market has been classified into agriculture, building & construction, textile, chemical, polymer, pharmaceuticals, and others.

By region, the market has been categorized as North America, Europe, Asia-Pacific, Latin America, and the Middle East & Africa.

June 2021- a subsidiary of global chemical producer Indorama Ventures Public Co. Ltd. (IVL), Indorama Ventures Xylenes & PTA LLC (IVXP), introduced the latest purified 2,6-naphthalene dicarboxylic Acid (PNDA) manufacturing plant, making it the largest PNDA producer across the globe. The plant is situated at IVXP’s integrated manufacturing site in Decatur, Ala. The firm used in-house technology to plan and build the new unit developed with most of the equipment made in the United States.
PNDA by IVXP is known to maintain a 99.8 percent purity level, the highest among others, with very low levels of metals and other organics. The facility can manufacture enough PNDA to meet present and projected global demand for the next ten years.

February 2021- Bain Capital, a private equity firm, sold 8.36 percent of Himadri Speciality Chemical, getting its holdings down to 12.7 percent, going by a stock market notification. According to a separate report, Bain Capital sold a 6.2 percent stake in a bulk deal.
Founded in 1987, Himadri has a well-established footprint across several product segments like specialty oils, naphthalene and refined naphthalene, carbon black, and coal tar pitch.

At what CAGR is the naphthalene market expected to grow over the forecast period?

Which region will have the largest share in the naphthalene market?

Asia Pacific is predicted to have the largest share in the naphthalene market.

What are key factors driving the growth of the naphthalene market?

Increasing use in the production of agrochemicals and construction chemicals is boosting the market growth.

Which factors may deter the growth of the naphthalene market?

Health-related hazards due to acute exposure may deter market growth.

What are the different applications of naphthalene?

It finds extensive applications in agrochemical, rubber, building and construction and textile.