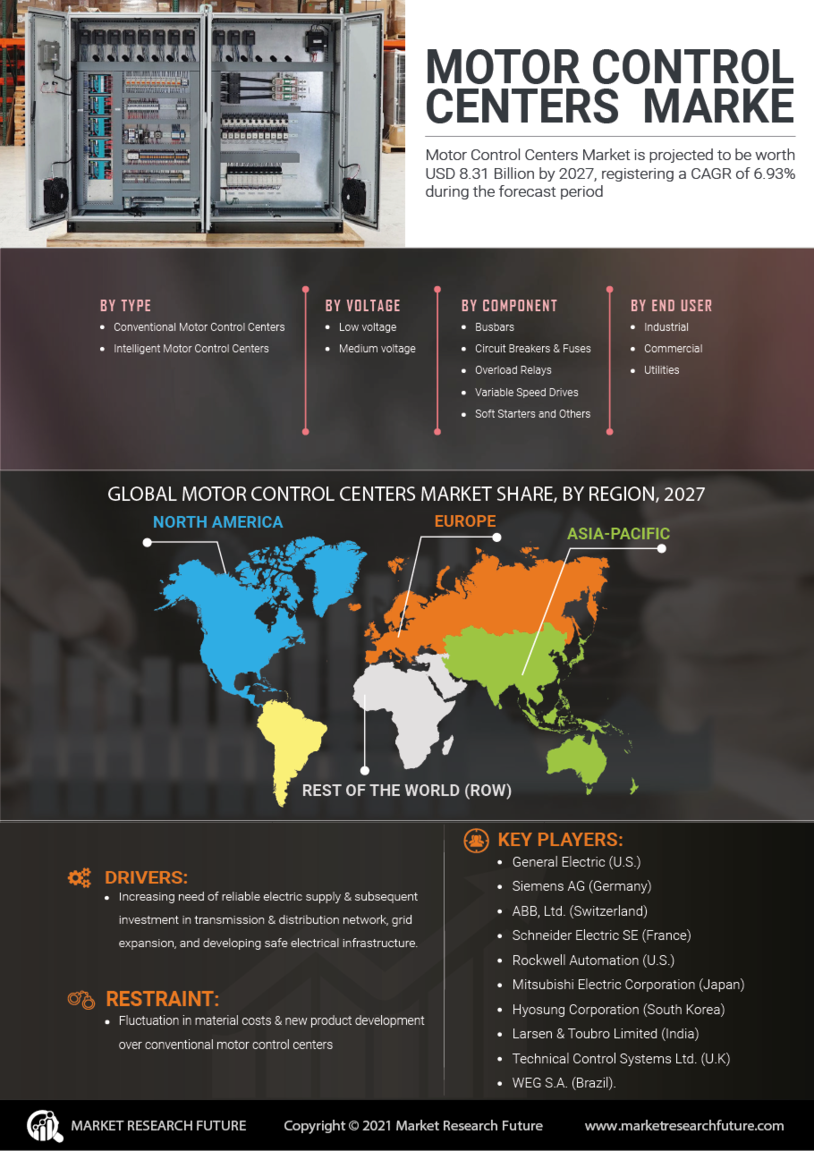 As the need for reliable electric supply in industrial sectors increases the demand for Motor Control Centers market continues also increases. The Motor Control Centers Market value is expected to reach 5.95% CAGR by 2023 as there is an ongoing rise in investment for operations like transmission and distribution network, grid expansion, and developing safer electrical infrastructure. The global market is driven by the increasing need for reliable electric supply & subsequent investment in transmission & distribution networks, grid expansion, and developing safe electrical infrastructure.

The COVID 19 has created a major shock in the global economy as the disease was spread in several countries restricting movement. It has potentially affected both the service and manufacturing sectors equally. Owing to the temporary shutting down of non-essential manufacturing sectors and other commercial industries, the Motor Control Centers industry is currently suffering negative impacts. However, the impact is expected to remain for short period. As the developing countries are increasingly showing interest in industrial growth, the demand for Motor Control Centers market is expected to bounce back in the upcoming years.

The investments in the oil and gas industry have significantly reduced. As a result, there is a sharp decline in the costs of the oil and gas industry has created a major challenge of uncertainty in the growth of the Motor Control Centers industry. Risks in Business continuity, the number of changes in production volume, the decline in the workforce, real-time decision making, security risks are some of the emerging negative factors due to COVID 19. Such factors are more likely to affect the industrial and commercial operations thereby affecting the Motor Control Centers Industries.

The advent of Intelligent Motor Control Centers has hugely impacted the overall performance, as the robustness of the components is increased. The life of the IMCC is also increased over 20 years. The Intelligent Motor Control Centers are capable of combining hardware, software, and communication systems. The PLC or motor starters generate piles of data that are collected and analyzed by IMCC to minimize the equipment downtime of motors. These factors have increased the demand among several industrial sectors.

As technology keep advancing over the years, high levels of automation are incorporated in manufacturing facilities. Every manufacturing plant thrives to meet efficiency and safety standards, acquire optimal productivity, and maintain competitive product pricing. Hence the industries started to automate their operations utilizing Intelligent Motor Control equipment like Motor Control Centers. Especially developed regions like North America, Europe are even more emphasizing automation to decrease the labor costs, while increasing the efficiency of the manufacturing plants.

Growing investments:
The increased investment rates across the globe have increased the demand for Motor Control Centers industry. The World Investment Report 2018 has stated that Asia-pacific held an investment worth about USD 476 billion. This factor has propelled the industrial and commercial sectors to advance their controlling and security features.

Favorable government initiatives:
Various government initiatives aided the improvement of the equipment regulations, promotion of energy management in industries, the efficiency of operations. For example, Italy has brought in a ten-year plan that potentially covered a broad range of energy sector interventions in the year 2017. The National Energy Strategy targets to reduce energy consumption by 30% by the year 2030. The government in Switzerland has announced a new set of standards for efficient energy consumption. Such supportive strategies have increased the operational efficiency in the industries. These actions have stimulated the growth of Motor Control Centers Market Share.

Increased usage of renewable energies:
Over 77% of the energy generated in Canada is through renewable energy sources and nuclear energy combined. The percentage will grow more in the upcoming years. The intensive utilization of electrical enclosures in hydraulic and solar grids is expected to drive the Motor Control Centers market growth.

The Oil and Gas industry is one of the leading end-users of the Motor Control Centers industry, which currently is facing a downturn in terms of pricing. The huge drop in capital expenditures in the industry has led to a decrease in the demand for industrial equipment. Hence currently, the oil and gas industry is focusing on improving the operational performance with the existing devices.

The Global Motor Control Centers Market is projected to witness a growth of USD 8.16 billion by the year 2028 registering 5.2% CAGR. Currently, the market value is at USD 4.89 billion. As the industries are incorporating automation in various sectors, strive to increase the optimization of energy consumption, the demand for Motor Control Centers has significantly increased in recent years. Owing to the rapid rise of industrialization and urbanization, the industries constantly look for solutions to maintain product efficiency, enhance safety standards and acquire optimum productivity. Such factors have stimulated these industries to utilize the Motor Control Centers in their plant.

Based on Type:
• Conventional
• Intelligent

Owing to the rise in industrialization and urbanization we can certainly expect new market players in the upcoming years, the existing players are listed below:

• A new technology named Intelligent Phase control has recently entered the market to reduce the workload in production and simplify the system design. It also stabilizes the motor rotation and reduces power consumption.
• Smart Motor Control Centers have the capability of integrating with advanced technologies like PLC, DCS which allow them to operate across multiple communication protocols.

Based on Type:
• Conventional
• Intelligent

What are the types of motor controllers?

What are the advantages of installing Intelligent Motor Control Centers?

What are the end-users of low-voltage Motor Control Centers?

What are the components of Motor Control Centers?

Motor Control Centers Market Is Predicted To Grow At Approximately 5.95% By 2027