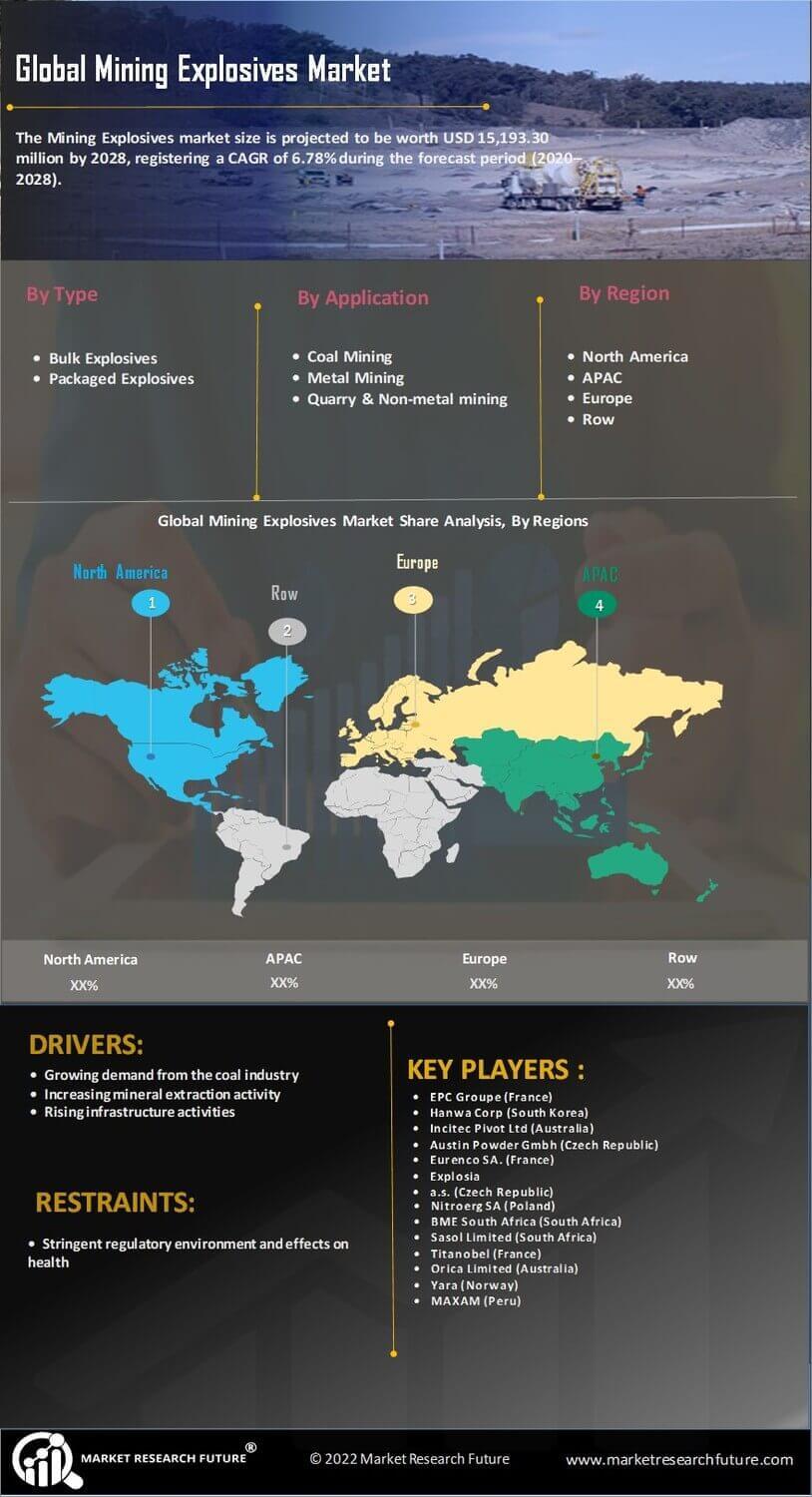 Explosives are a reactive mixture of a high-energy substance that explodes under high pressure and temperature. Explosives are classified as detonating (high explosive) or deflagrate (low explosive) based on the rate at which they explode (low explosive). In the global mining explosive market, packaged and emulsion explosives are gaining traction. Furthermore, mining resource extraction has resulted in global industrial development, particularly the emergence of new players such as Africa, Latin America, and Asia. As a result, the mining explosives market growth prospects are heavily reliant on the metal and coal mining industries.

COVID-19 Impact vs. Opportunities for the Mining Explosives Market:

Mining in the Middle East and North Africa (MENA) is a thriving industry with promising prospects for mining, resource, and infrastructure companies. Gulf countries are attempting to diversify their economies in order to reduce their reliance on oil and gas while also providing employment for their young, rapidly growing populations.

Modern technology and equipment are being used to survey Arabian regions in search of untapped growth opportunities. Despite having nearly 30% of the world's mineral resources, Africa receives less than 5% of global mining investment. Australian economists predict a market rebound, citing the discovery of approximately A$700 billion in minerals by Australian corporations across the African continent over the last five years.

Because of the high concentration of resources in these regions, global mining companies are looking for long-term viability, especially given the industry's recent plateau. Northern African countries are amassing vast amounts of unexplored mining materials as a result of a three percent drop in FDI in Africa as a result of the civil unrest in Libya. This, in turn, is expected to provide manufacturers with an opportunity to invest in the market during the forecast period.

COVID-19 has had a negative impact on overall chemical production, particularly mining explosive production, owing to supply chain disruptions around the world. The metal and mining industry's average share price has decreased over 10%, and many standalone companies have lost 40-50 percent of their market value. This is due to the global quarantine and travel restrictions imposed to prevent the spread of the coronavirus. The pandemic has had an impact on global operations of various industries. Some of the industry's main companies, including BHP Billiton, Rio Tinto, and Anglo American, have reported partial shutdowns, resulting in a production loss of about 30%.

China dominates the global intermediate product supply chain, which includes metal and metal products, with a share of more than 20%. As a result, the economic disruption produced by COVID-19 in China is projected to spread to other countries around the world. If China's exports are cut by even 2%, the European Union's metal industry is anticipated to lose more than USD 1 billion. Because of dwindling orders, a lack of available labor, or as a safety precaution against coronavirus, steel manufacturers in Europe are curtailing production and idling plant lines in which people are not working. "This is going to be a loss-making year for the European steel industry," says commodity specialist James Campbell of CRU.

Other businesses that rely on the supply of ferroalloys and steel, such as autos and foundries, have been closing down around the world as a result of the downturn in the metal and mineral industry. According to some analysts, the metal industry is experiencing a drop in demand due to the spread of the coronavirus; rather, the quarantine or shutdown is degrading demand..


Explosives are used to extract coal mostly from underground mines compared to surface mines. Coal is among the important and reliable energy resources covering 30% of the global energy consumption. Around 40% of globally generated power relies on this fuel. Increasing global demand for energy and the subsequent increase in the coal-fired thermal plant is expected to spur the demand for coal mining. The major coal-producing countries are China, the U.S., India, Indonesia, and South Africa.


The GCC is a promising region in the mining industry. Rather than relying solely on oil and gas earnings, the GCC countries have prioritized economic diversification, investing in non-oil areas such as mining to grow their economies and create jobs.


Explosives being used for mining and quarry activities drive the attention of the government to control the production of explosives, storage, and transportation. They contain blasting agents such as ANFO, bulk emulsions, explosives, and slurries, which are hazardous to the environment.

Mining Explosives contain blasting agents such as ANFO, bulk emulsions, explosives, and slurries, which are hazardous to the environment. Environmental protection agencies (EPA) and other government bodies are responsible for lowering down the explosive pollutants. Other regulatory bodies include Federal Water Pollution Control Act and Resource Conservation and Recovery Act (RCRA) that regulates the generation, storage, and disposal of solid waste from generation to disposal.

Asia-Pacific accounted for the largest market share and is projected to witness the fastest growth in the market. This is mainly attributed to the growing coal mining activities, rapid industrialization in the region, the presence of a considerable number of producers, infrastructure development, and growing exports. North America accounted for the second-largest share in the global market owing to the presence of numerous players in this region and the rising adoption of innovative technology. North America is followed by Europe. Europe recorded stagnant growth in the global market owing to rising demand for metals in this region results in the expansion of mining industries. On the other hand, the Middle East & Africa is expected to witness significant growth owing to the growing investment in mining activities in the end-use industries. The Latin American market is likely to create notable opportunities due to the rise in industrialization and increasing mining activities in major countries.

Some of the key developments include:

The Mining Explosives market is segmented by type, application, and region in the report. In terms of insights, this report has focused on various levels of analysis such as market dynamics, value chain analysis, Porter's five forces, competitive landscape, and company profiles—all of which comprise and discuss views on the global Mining Explosives emerging and fast-growing segments, regions, and countries.

What growth rate global Mining Explosives market would register in the future?

The global mining explosives market would register a growth of 6.78%.

Which industry will play a crucial role in taking the Mining Explosives market ahead??

The coal mining industry will play a prominent role in taking the market forward.

What is the key driving restraining factor for the global Mining Explosives market?

Stringent regulatory environment and effects on health could restrain the market.

Which region would enjoy the upper hand in the Mining Explosives market?

Asia-Pacific would enjoy the upper hand in the mining explosives market.

Which Asia-Pacific country would set the trend in the Mining Explosives market?