Low-Cost Satellite Market: Information by Satellite Type (Nano, Micro, and Others), by Function (Communication, Imaging, and Others), by End User (Commercial and Military), and by Region (North America, Europe, Asia-Pacific, Middle East & Africa, and Latin America) - Forecast till 2030 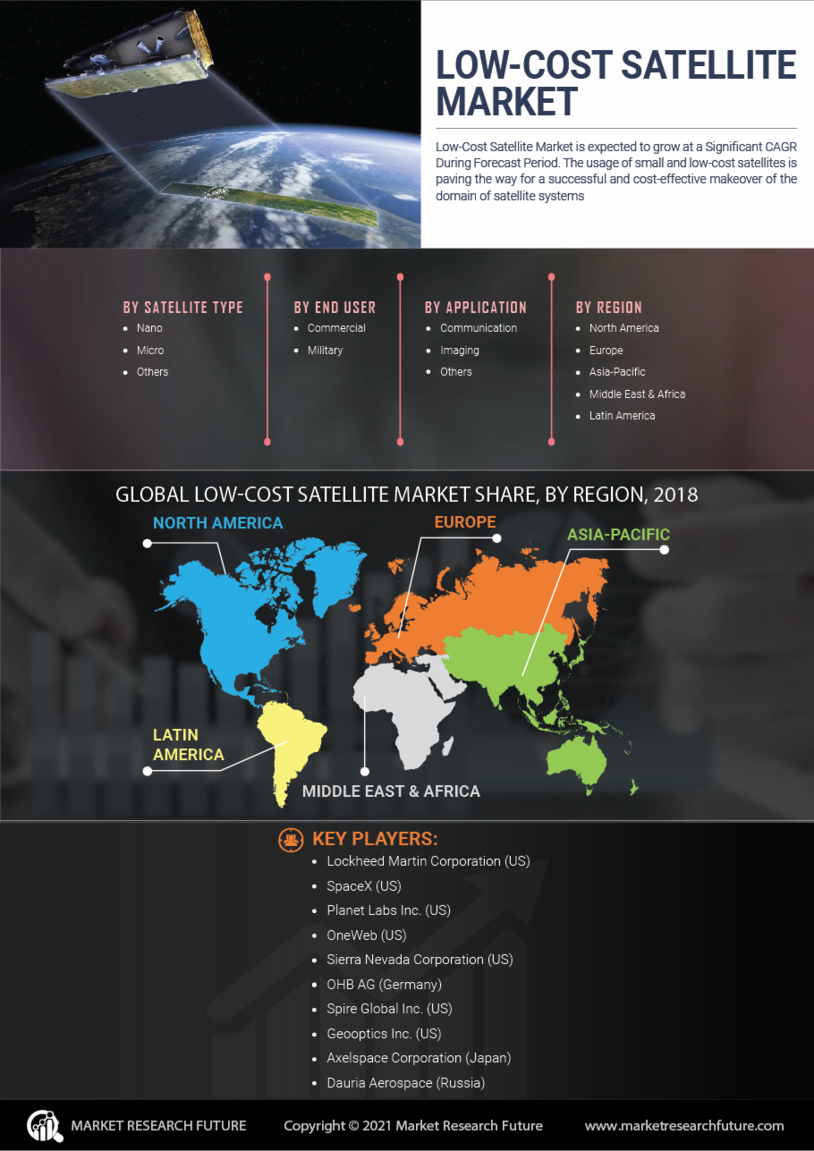 The global low-cost satellite market size is forecasted to have a market dominance of approximately USD 494million in 2028 and a CAGR of 6% during the estimated period. The constant market revenue growth has been achieved owing to the demand for low-cost satellite missions followed by flexible and huge accessibility of technical opportunities invisible. In technical terms, the shorter missions greatly reduce the total cost significantly and further provide a budget diversion for highly ambitious space projects. Along with it, low-cost satellites also offer budget efficiency by allocating funds for other segments such as research and development (R&D) and training purposes, highly beneficial for low funding missions that diverge the allocation of funding for health and welfare portfolios.

This cost efficiency is the primary reason for the demand for miniature satellites and low-cost satellites for low earth orbit purposes, and the subsequent growth is duly followed. In the contemporary period, this cost reduction approach has a great advantage. It enables the coveted space missions for the launching of not in small number but the constellation of satellites into the low earth orbit (LEO). The advantage of the constellation of safelights is that it rotates over a particular geographical area more frequently than the conventional single, large satellite missions, which further subcategorizes its advantage to the following sub-area:

In 2018 the sky and space global announced its planning of providing communication services through a satellite constellation of 200 units,10 kg weightage for each. The plan was of activation by 2020, offering services such as: -voice, text, and data transfer to equatorial regions of the Earth such as a major portion of Africa and Latin America.

The COVID-19 impact on the small satellite market is uncertain, and further growth is postponed until the second quarter of 2021.

The COVID-19 outbreak made the governments impose stringent lockdowns, which led to a simultaneous downgrade in demand for the small satellites market in the world.

In addition, global level nation-imposed lockdowns disrupted the supply-chain at almost all manufacturing centres had to forcefully halt the ongoing action.

On the contrary, the impacts of the COVID-19 outbreak created a severe demand-supply issue for the small satellite industry around the globe.

The low-cost satellite market is categorized into minisatellites, microsatellites, nanosatellites, picosatellites, and demo satellites based on satellite type. Minisatellites are useful, especially in large numbers, better performing than the traditional larger ones for several purposes such as radio relay and scientific data. At the same time, "microsatellites" or "microsat" is typically used for the artificial satellite with a weight mass between 10-100 k.g. In 2018 the two microsats of 13.5 k.g each became the first CubeSats exiting the earth orbit for use in interplanetary space. That was the successful mars insider lander mission.

And "nanosatellites" or "nanosat" is an artificial satellite with wet mass ranging from 1-10 k.g.As per the data, over 1600 nanosatellites were launched in August 2021. A CubeSat is a common type of satellite made of multiples of10cm *10cm*10cm with a mass of around 1.33 k.g. Some nanosatellite examples are:- ExoCube (cp-10), ArduSat, SPROUT. In April 2013NASA has launched three satellites based on smartphones. The phones use PhoneSat 1.0, and the third one is the beta version of PhoneSat 2.0.

ISRO launched 14 satellites on 22 June 2016, in 2 for Indian universities and the rest 12 for the USA under the Flock-2P programme., which was performed during the PSLV-C34 mission.

And in a later period, ISRO launched 103 nanosatellites in February 2017. This was performed during the PSLV-C34 mission.

As far as the application part is concerned, the low-cost satellite market is diverted into

According to the data, the low-cost satellites have vast applications in communications, along with the connectivity solution to the existing IoT(internet of things) networks. The low-cost satellites have a greater preference due to their shorter propagation delay than the large satellites(the orbit is in the higher earth orbit, for example, geostationary orbits). The upcoming 5G technology is most likely to boost the demand for low-cost satellites to a drastic extent in the futuristic world. Low-cost satellites, for example:- nanosatellites, provide cost reduction and the means for the remote sensing earth observation and show results in frequent imaging with high temporal and spatial resolution, which is the building blocks of the monitoring and study of the dynamic processes such as vegetation and geographical cover, oceanography, and marine and inland water. The performance of the low cast satellites is significantly grabbing the attention of multifaceted aspects of the scientific field, and further advancements from space agency platforms, universities, and private companies to launch low-cost satellite missions is impressively entering to a growth initiator.

If end-use dynamism is taken into consideration, then low cast satellites market has been diversified into subcategories viz:-

The low-cost satellites market demand in North America is analyzed for the largest revenue share in 2020, intended to the rising shift to advanced technologies, increasing further research and development (R&D) and subsequent activities in this regard. This is easily visible from high budget allocation, especially in the USA. This is further aggravated by the coming forward action of the top players providing the low-cost satellites, the reason to constant fuel for the market boost in this region. Low-cost satellite market revenue in the Asia Pacific region is estimated to fastest entry in CAGR over the predicted period, for the roaring growth of the telecom sector and resulting increasing internet connectivity by the Governmental intervention, especially in the developing regions. In addition, significant investment in this field leads to cost reduction and, along with cutting edge technology in low-cost satellites in the region, is boosting the market growth.

In November 2020, Blue Canyon Technologies Inc, dealing with providing small satellites, had announced the signing of an agreement for the acquisition by Raytheon Technologies, the company delivering astonishing aerospace and defence systems and services for the Government, military, and private sector commercial dealings globally.

Before the above in June 2019, Thales Alenia Space merged in a partnership with the Hemera for the allied development of the advanced nanosatellite arena and delivered the devoted antennas, payload, and ground segment. In the contemporary period a significant growth and demand for small satellites around the globe. According to a source, more than 2900 nanosatellites have been launched into the Earth's orbit as of January 2021. Private firms are launching the constellations of small satellites known as nanosatellites or microsatellites into the Earth's orbit for the application purposes such as earth observation and telecommunication viz:-high-speed and space-based internet services. For example, Sateliot, a nanosatellite and telecom operator based in Spain, signed the memorandum of understanding (MOU) with the European Space Agency (ESA) in January 2020 to research analysis, development, and deployment of new space capable good and services with the advent of 5G.

This data delivers the traditional data and predictions of the revenue growth at the global, regional and also at the country level and submits the analysis of the recent market trends segment-wise from 2018-2028and the scope of the report are as follows:

The Middle East and Africa

What is the estimated growth rate of the global low-cost satellite market?

Who are the significant players operative in the global low-cost satellite market?

A few eminent market players operating in the global low-cost satellite market are SpaceX (US), Planet Labs Inc. (US), Lockheed Martin Corporation (US), among others.

Which satellite type is expected to witness the highest growth?

The microsatellite segment is expected to observe substantial demand over the review period.

What is the function segment of the global low cost satellite market expected to witness the highest growth?

The communication segment is slated to expand as the fastest-growing segment.