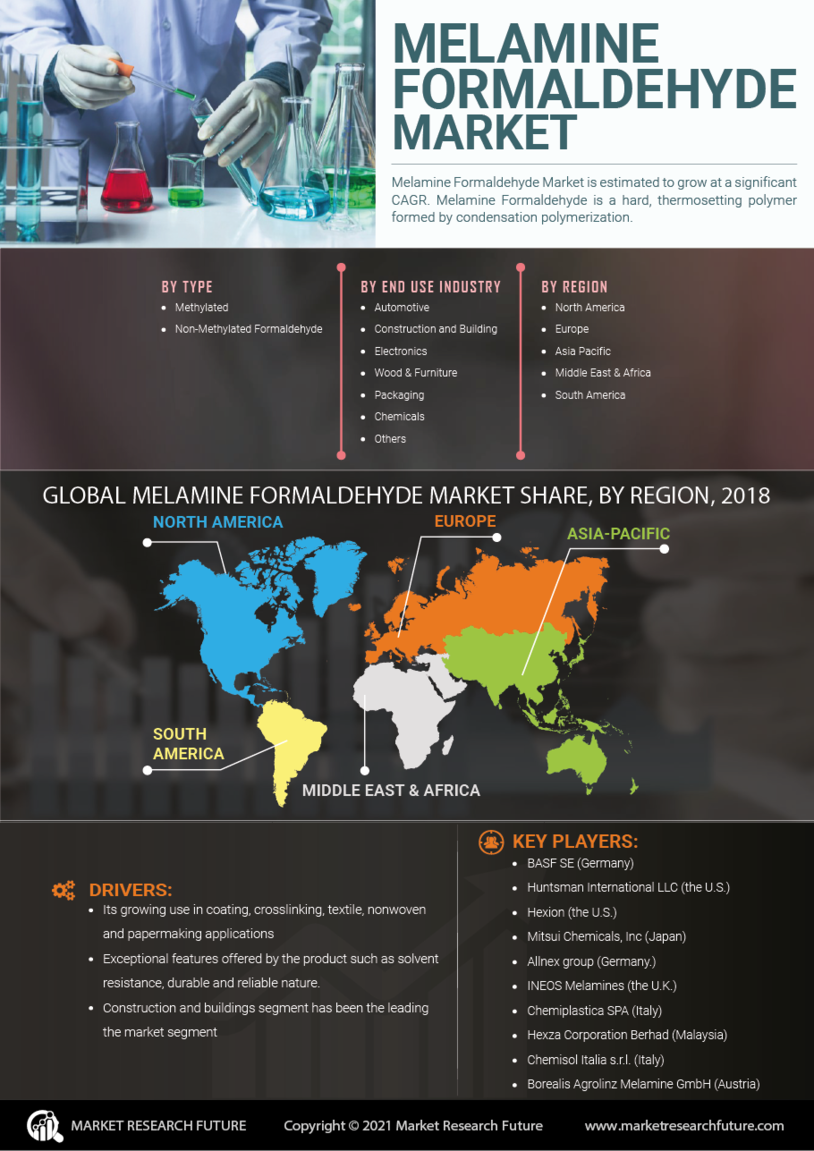 Melamine Formaldehyde Market occupies a CAGR of 6.5% and is expected to reach a market value of USD 118.03 Billion during the forecast period till the end of 2030.

Melamine Formaldehyde Market Overview The Melamine Formaldehyde Market occupies a CAGR of 6.5% and is expected to reach a market value of USD 118.03 Billion during the forecast period till the end of 2030.Melamine formaldehyde, often known as melamine resin, is made by polymerizing formaldehyde and melamine. Because it is a thermosetting plastic with a net-like structure and cross-linked polymers, it is the toughest polymer. It is not feasible to remold or melt it, as it has been subjected to chemical alterations throughout the operation. Moisture resistance, hardness, weather resistance, temperature resistance, and other characteristics are among the most important. Melamine formaldehyde is a synthetic resin made from the condensation of two monomers: melamine and formaldehyde. Melamine formaldehyde is heat and fire-resistant thermosetting aminoplast that is resilient, rigid, and flexible. Particleboard and plywood adhesives, laminated tabletops and countertops, automotive surface coatings, and dishwasher-safe tableware all use this chemically resistant resin. Melamine formaldehyde contains a lot of nitrogen. Melamine sublimation absorbs a significant amount of heat energy and is hence employed as a heat sink in fire scenarios. As a result, melamine-formaldehyde can be used instead of halogen-based flame retardants. It is mostly found in specialty paints, textiles like firefighting gear, and flexible urethane foam, which is utilized in the bedding industry, as well as furniture and electronics. 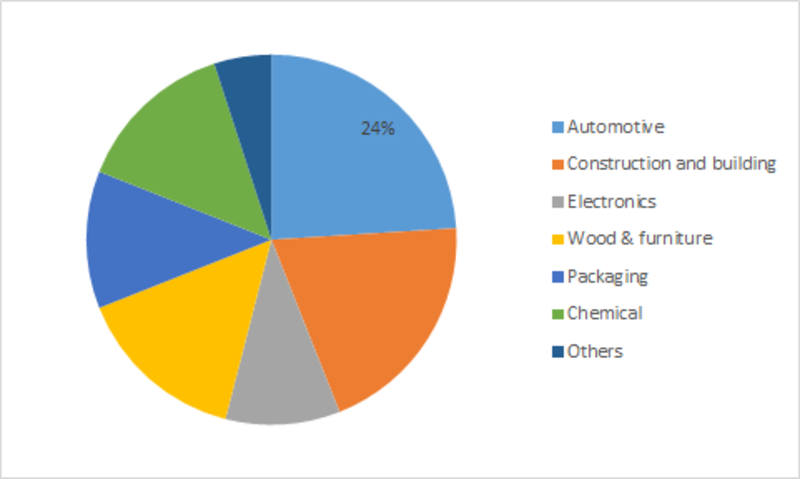 The Global Melamine Formaldehyde Market is segmented into five regions of the world, Asia Pacific, North America, Europe, Latin America, and the Middle East & Africa. Among these, Asia Pacific holds a major share of the market due to the growing demand for Melamine Formaldehyde polymers in automotive, construction and building, electronics, and others. The construction and buildings segment is predicted to witness a rapid growth in the market due to increasing consumption of formaldehyde resins in countries such as China, Japan and India. It is estimated that the automotive segment is set to witness a higher growth in the market during the forecast period, 2019-2030.

The North American region has observed a notable growth in the market due to growing demand of formaldehyde resins in end-use industries such as coatings, textiles, paper, plywood, and others. It is observed that the packaging segment is set to witness a higher CAGR in the market owing to rapid consumption of melamine resins in jar lids, board and beverage cans. Due to these factors, U.S., Canada and Mexico are the major players in this region.

Europe has observed a recognized progress in the market due to an increased use of melamine resins in construction and buildings, automotive, and other sectors. These resins are utilized in these sectors to manufacture low cost, efficient, high standard, and durable products. Owing to these factors, Germany has accounted for major share in the market followed by the U.K. and Italy. It is estimated that the growing industrialization coupled with advancing technology will drive the market during the forecast period.

The Latin American region is estimated to witness a recognized development in the market due to growing consumption of formaldehyde resins in automotive, construction & building, textiles, wood and furniture industries. Moreover, the Middle East & Africa is anticipated to witness a higher growth in the market due to high disposable income and growing investments in the heavy end industries.

The Global Melamine Formaldehyde Market is segregated into the type and end-use. The methylated and non-methylated formaldehydes are segmented on the basis of type. Among these, the methylated formaldehyde segment is accounted for a major share of the market due to its growing use in coatings, textiles and other industries. On the basis of end-use, the market is further categorized into automotive, construction and building, electronics, wood & furniture, packaging, chemicals, and others. Among these, the construction and building segment holds a major share in the market owing to growing use of polymer materials in flame retardant materials, flooring, dry base boards, and others. The investors in the automotive industry are encouraging the manufacturers to use melamine resins as a substitute for heavy materials due to its ecofriendly, corrosion resistant and durability. Therefore, the segment is predicted to witness a rapid growth in the market owing to growing use of lighter weight materials. The packaging segment is fueled by the extensive use of Melamine Formaldehyde in dinnerware, chopsticks, dairy product containers, and others. Moreover, the electronics, wood furniture and chemical segments in the market have been driven by the exceptional features offered by the product such as abrasion resistance, low density materials, high standard, among others.

What is melamine formaldehyde and what are the major factors driving its applications?

Melamine formaldehyde is a thermosetting polymer formed by condensation polymerization. It exhibits properties such as excellent resistance to extreme heat, UV radiations, and corrosion, and it has low fire susceptibility, which are important attributes driving its applications.

What are the major applications of melamine formaldehyde?

Which region holds the largest share in the melamine formaldehyde market?

What are the key growth strategies of melamine formaldehyde industry players?

Strategic initiatives such as mergers & acquisitions, collaborations, expansion, and technology/ product launch are some of the growth strategies that players operating in the global Melamine formaldehyde market adopt to gain a larger competitive advantage.

Who are the top players in the global melamine formaldehyde market?

Melamine Formaldehyde: Increasing Demand of Melamine Resins in Construction and Buildings is esti...