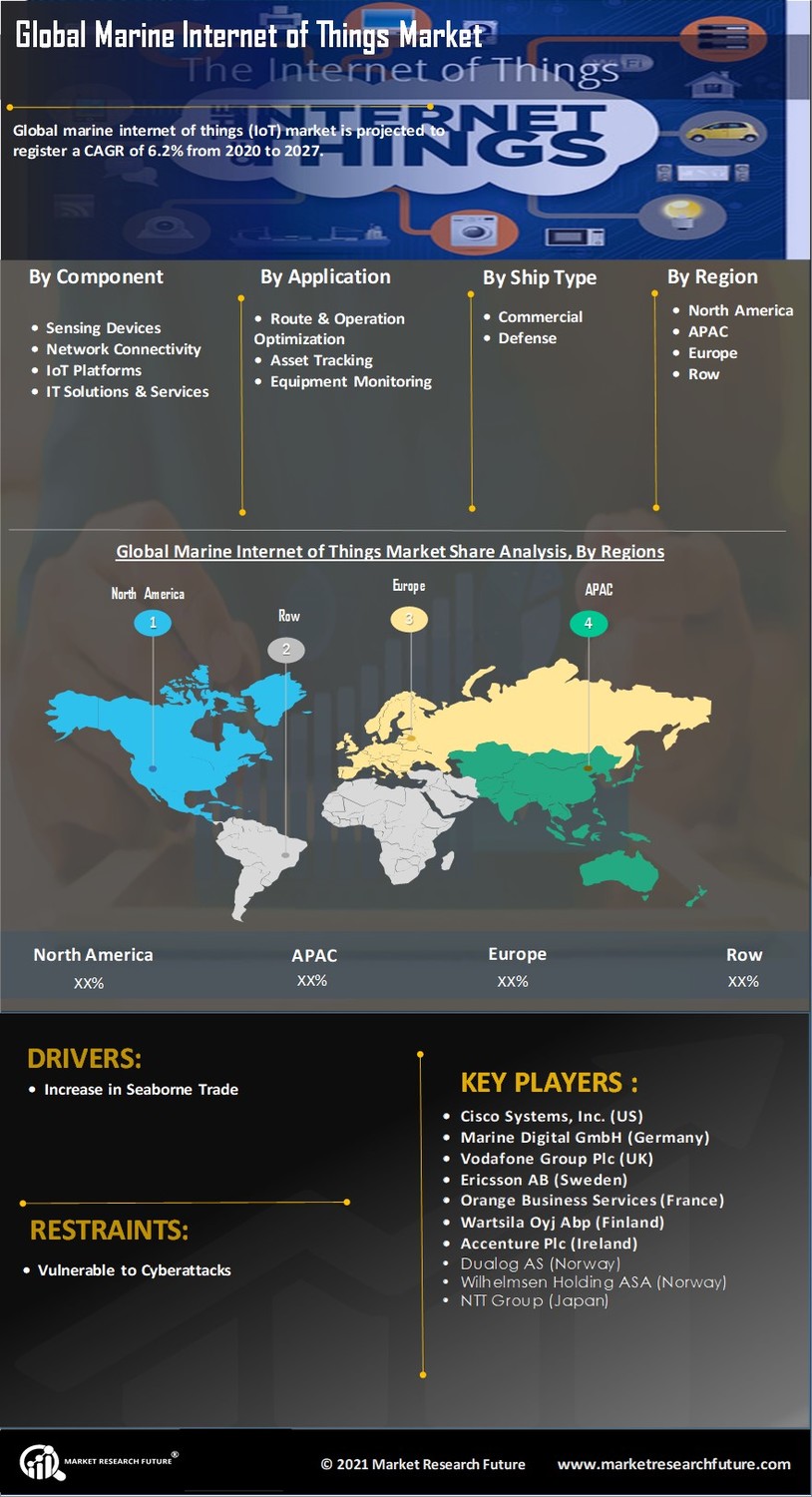 The marine internet of things market is growing significantly due to the continuous digitization and automation of the maritime supply chain. Globally ships are being equipped with technologically advanced systems, sensors, and solutions to boost cost-efficiency and increase operational efficiency.

The global marine internet of things market has witnessed high growth in recent years due to increased seaborne trade and increasing defense expenditure. Moreover, the growing maritime tourism industry is driving the growth of the market. Furthermore, factors such as the use of renewable sources of energy and advancements in hybrid propulsion technology are expected to offer lucrative opportunities for market growth.

According to MRFR, the current projections of global marine internet of things market growth till 2027 are expected to be lower than pre-COVID-19 estimates. The pandemic has had a devastating negative impact on the defense industry across the world. In the defense industry, due to a decrease in tax revenues with a decrease in GDP, it is also expected to decrease the demand for new military aircraft, naval vessels, ground vehicles, related systems, and soldier equipment in the next few years. This is also expected to decrease the demand for marine internet of things.

Many governments across the globe are focused on controlling COVID-19 outbreaks in their countries. Hence, they are investing more in healthcare equipment and the development of vaccines. Therefore, the defense expenditures on new products are expected to be lower in the next few years. The defense expenditure is expected to increase gradually during the forecast period after the pandemic ends.

Likewise, due to the decrease in global trade, the maritime transport industry is also growing at a low pace. Therefore, the demand for new technologies by commercial ship operators is also expected to be low in the upcoming years.

Thus, it is expected that the global marine internet of things market will grow at a slower rate in 2021 and 2022; from 2023, it will grow gradually.

Maritime transport is considered the backbone of global trade and economy; shipping carried more than 85% of the world’s goods, by volume, in 2019. Seaborne trade continues to expand, bringing benefits to consumers across the world through competitive freight costs. This is also expected to drive the growth of the global marine internet of things market during the forecast period.

Use of Renewable Energy

Military vessels that rely on satellite communication in remote areas are vulnerable to cyberattacks. For instance, the cyber intelligence company IntelCrawler found that of the 3 million VSATs installed on military and commercial vessels, around 10,000 could be easily accessed due to configuration weaknesses. The terminals with data transmission rates between 4 Kbps to 16 Mbps used in narrowband and broadband data transmission were more vulnerable to cyberattacks.

The global marine internet of things market growth is expected to be at a rate of 6.2% over the analysis period (between 2021 and 2027), on account of increasing demand for improved efficiency of vessels with advanced IoT devices.

Asset Tracking: The asset tracking segment is expected to grow at the highest CAGR during the forecast period. The use of IoT in asset tracking is increasing over the last few years, which helps handle all the assets efficiently.

Equipment Monitoring: The equipment monitoring segment is expected to grow at the highest CAGR during the forecast period. IoT equipment are connected through the Internet network, which helps monitor all the equipment efficiently, driving the growth of this segment.

Commercial: This segment dominated the marine internet of things market in 2019. The commercial segment comprises cargo vessels such as container vessels, bulk carriers, tankers, and general cargo ships, passenger vessels such as yachts, cruise ships, and ferries, and other vessels such as fishing vessels, tugs &workboats, dredgers, research vessels, and submarines. Due to factors such as increasing seaborne trade, growing maritime tourism industry, rising adoption of IoT, and implementation of the IMO Sulphur 2020 Regulation, the demand for IoT systems and solutions for commercial applications is anticipated to increase during the study period.

Defense: The segment is expected to register the higher growth rate during the study period. The defense segment includes destroyers, corvettes, frigates, offshore support vessels, aircraft carriers, and submarines. Increasing military spending on the development of new and advanced combat vessels is expected to increase the demand for IoT solutions.

North America comprises two major countries, namely, the US and Canada. North America dominated in terms of military expenditure and technological advancements and generates a very high demand for marine internet of things. Although Canada makes some investments in developing such advanced weapons, the country’s market is primarily dependent on the US. The region accounted for the largest share in the global market in 2020, primarily due to the increasing adoption of advanced naval vessels by the US Navy for tactical missions. This is expected to drive the growth of the market during the review period. Moreover, the presence of major marine internet of things solution providers such as Cisco Systems, Inc. is fueling the market's growth in North America.

Additionally, the increasing military expenses by the US Department of Defense (DOD) on marine internet of things, in recent years, have resulted in the market witnessing a significant surge in demand in this region.

Asia-Pacific accounted for the largest market share in 2019. The market in the region is also projected to register the highest CAGR during the forecast period, primarily due to the increasing defense expenditure in India and China and the rising demand for new and advanced naval vessels. Moreover, high seaborne trade is driving the regional market growth. In Asia-Pacific, the market growth is significantly driven by major countries, such as China, Japan, India, and Australia, due to the rising investments in marine IoT. Increasing military expenditure and rising territorial conflicts between neighbouring countries such as China, South Korea, and North Korea are driving the regional market. According to SIPRI, China’s military spending increased from approximately USD 215 billion in 2016 to USD 250 billion in 2018. Additionally, military expenditure in India grew by around 9% from 2017 to 2019. Furthermore, military modernization activities and increasing development of soldier equipment by China, India, and other Asian countries are further driving the market's growth.

The global marine internet of things market is expected to grow significantly in the coming years due to increasing defense expenditure and a rise in seaborne trade globally. The global marine internet of things market is characterized by the presence of several global and regional vendors. The global market is highly competitive, with all the players trying to gain maximum market share. Frequent changes in government policies, intense competition, and government regulations are the key factors that impact global market growth. The vendors compete based on cost, product quality, and reliability.

The scope of the report highlights drivers, opportunities, restraints, and challenges surrounding the global market. With easy-to-comprehend segmentation that includes component, application, ship type, and region, MRFR projections are based on historical and expected trends. Major firms active in the global market have been profiled and paired with the top strategies employed by them to remain competitive in the industry.

How big is the Marine Internet Of Things (IoT) Market

Which are the top players involved in Marine Internet Of Things (IoT) business?

Which regions is predicted to held the highest share in the Marine Internet Of Things (IoT) market?

Which segments are covered in Internet Of Things (IoT) market report?

According MRFR Latest Study Component, Application, and Ship Type this are Internet Of Things (IoT) market

Growing Demand for Chemicals Across the Globe is Expected to Boost the Demand for Marine Internet...