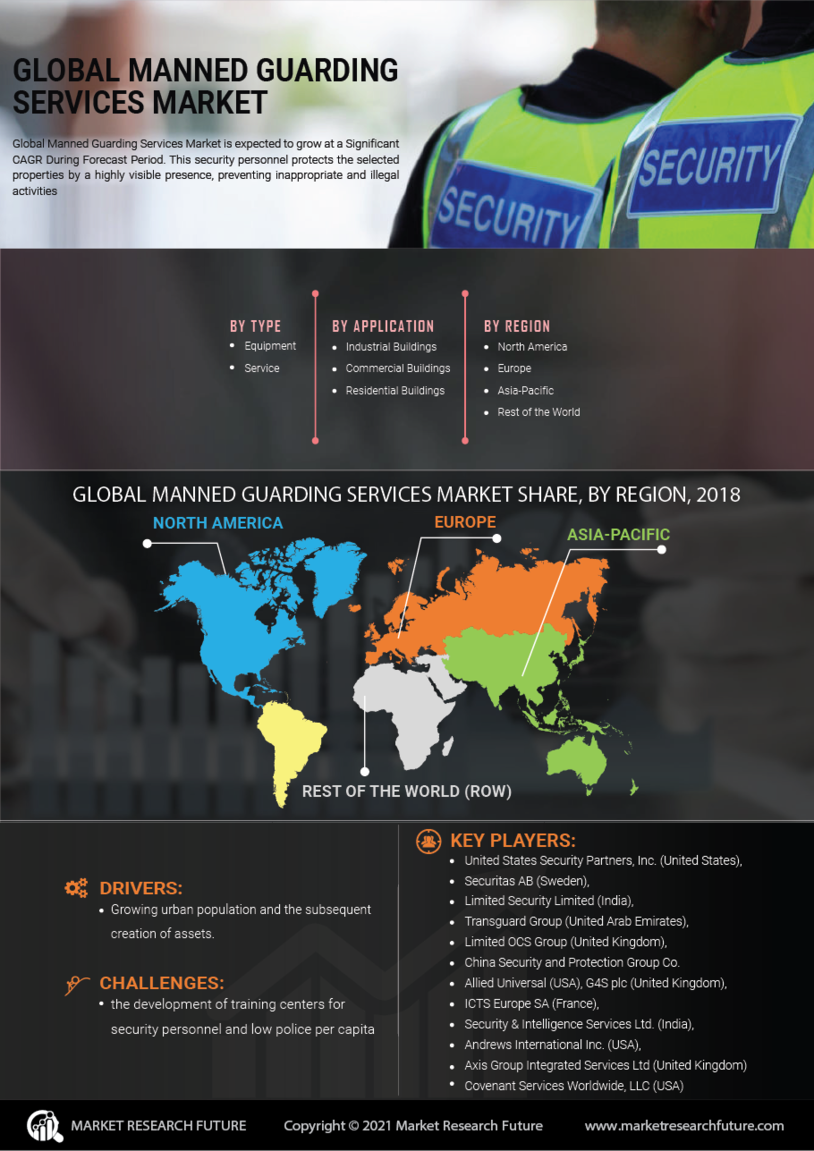 This security personnel protects the selected properties by a highly visible presence, preventing inappropriate and illegal activities. Security guards rely on physical patrol and use advanced technology, such as video surveillance cameras and alarm systems. These security professionals are trained to watch for signs of disorder, fire, or crime. Ensuring the safety of an organization through its physical presence, the protection of the workforce plays an important role in making employees feel safe and become more productive. Security guards are employed by organizations in all sectors around the world.

Human guard services also include patrolling construction areas to prevent unauthorized entry or occupation, controlling property from damage and theft, and protecting people from any negative consequences of illegal behavior by others. The manned guard is the largest part of the security services industry and the manned guard sector is more organized daily. Integrated guard solutions are the main trend observed in this sector. In this report, the market value of human resources covers the market value of the services offered by security personnel trained to ensure safety, as well as the market value of the equipment that helps provide these services. There is a high demand for personnel in industrial, commercial, and residential buildings.

The market is highly organized and well regulated in developed countries, such as the United States and the United Kingdom. In developing countries, such as China and India, the market is highly fragmented and consists of several important players operating at regional levels. The global market for manned guard services is driven mainly by a growing urban population and the subsequent creation of assets.

Besides, an increasing transition from people to live in safe housing and controlled communities, due to the increase in crime rates, is also positively hampering the growth of the market. Meanwhile, an increase in automated security systems is hampering market growth to some degree. However, factors such as the development of training centers for security personnel and low police per capita, especially in developing countries like China and India; offer promising growth opportunities for the market.

The global market for Manned Guard Services will reach $ 228.6 billion in 2025, driven by rising crime rates and the inability of the police and legal department to provide comprehensive protection coverage everywhere in a country. Other interesting factors were also responsible for encouraging growth include the growth of large shopping malls, luxury hotels, and elite residential enclaves; increasing security needs of individuals and companies with high net worth per day; increased risk of theft, kidnapping, and blackmail by influential public figures and the consequent demand for personal bodyguards; and increased crime in private infrastructure. In developing countries, a greater amount of monetary logistics leads to a demand for labor security among banks and financial institutions. Crew surveillance involves hiring security personnel or guards who are specifically trained to protect people, property, and property, preventing crime, illegal entry, and aggression. Human security services meet the security needs of their customers and benefit an organization in an untouchable and subtle way.

Manned Guarding Services Market Size - Regional Analysis:The global crew guard market is estimated to witness a 6.44% growth rate during the forecast. In 2017, the market was led by the United States, with a 27.42% share, followed by European countries and China, with a share of 24.19% and 15.41%, respectively. Asia-Pacific is the fastest-growing region for the manned guard market.

Large companies will be eager to expand their services in this region. Meanwhile, compared to the large population and rapid economic growth, police per capita in most countries in this region are lower compared to the global average. Besides, the Asia-Pacific region lacks basic personnel custody services, such as qualified employees, state-of-the-art security equipment, and organizational structure.

Manned security companies:The major companies will increase their business in the Asia-Pacific region during the forecast. Meanwhile, the United States is the largest market for manned guard services. The presence of a large number of urban centers and industrial infrastructure, the spread of crime, and the threat of terrorism have resulted in the growing demand for security services in the United States. Private security services are preferred primarily for tasks that consist of protecting high-level individuals and delivering high-value remittances. Besides, the country is home to some of the top security agencies, such as U.S. security associates, Allied Universal, and Andrews International Inc.

Crime market and manpower surveillance market:The prediction of crime rates may also be incomplete, with forecasts generally based on numbers from previous years, which is not accurate because it does not take into account variables such as the economic climate or changes. The success rate of professional security services is not only based on loss reduction but also return on investment. Would it be more useful not to have security services installed? The company knows it can be completely safe, but experienced traders understand that crime is a constant threat and that security measures must be considered.

We certainly know that retail crime grew in 2009, with a reported cost of £ 2.8 billion for the British economy. The media lamented the global recession as a deciding factor, but it cannot be labeled for all business failures. Traditionally, when a country experiences an economic crisis, security services thrive because of the nature of the animal and people turn to crime to get what they can’t afford. However, with the change at the time more prone to bank credit, despair less than before. Having said this, however, some have risked a mortgage that cannot but bear interest inflation and need extra work to survive, which is not available because there are more unemployed than available jobs. A pastor in Canterbury said in a sermon that it is good to eat in a state of despair, so with such feelings, it certainly conveys a national cause.

Some areas will report an increase in crime rates, but this does not necessarily suggest that it is widespread. In any case, the recession is not the only factor driving up crime rates, but it has certainly played a major role in the past year. As unemployment rises, so does the need to steal. With the need to steal more and more, retail stores are more likely to use security services to protect the store, so the crime rate needs to be estimated in this regard.


Manned Guarding Services Market Opportunities - Main conclusions:The global market for human guard services in this report has been segmented according to the type into two, i.e. equipment and service. The equipment segment market is projected to record the highest 6.98% growth rate during the forecast.

The global market for manned surveillance services has been segmented, by end-user, into industrial buildings, commercial buildings, and residential buildings. The commercial construction segment market is expected to record the highest 6.66% growth rate during the forecast.

Scope of the reportThis market study covers the global and regional markets through an in-depth analysis of the overall growth prospects of the market. Besides, it illuminates the broad competitive landscape of the global market. The report also gives an overview of the panel of leading companies that address their successful marketing strategies, market contribution, recent developments in historical and current contexts.The manned guarding services market reports focus heavily on:Preface of human guard services: