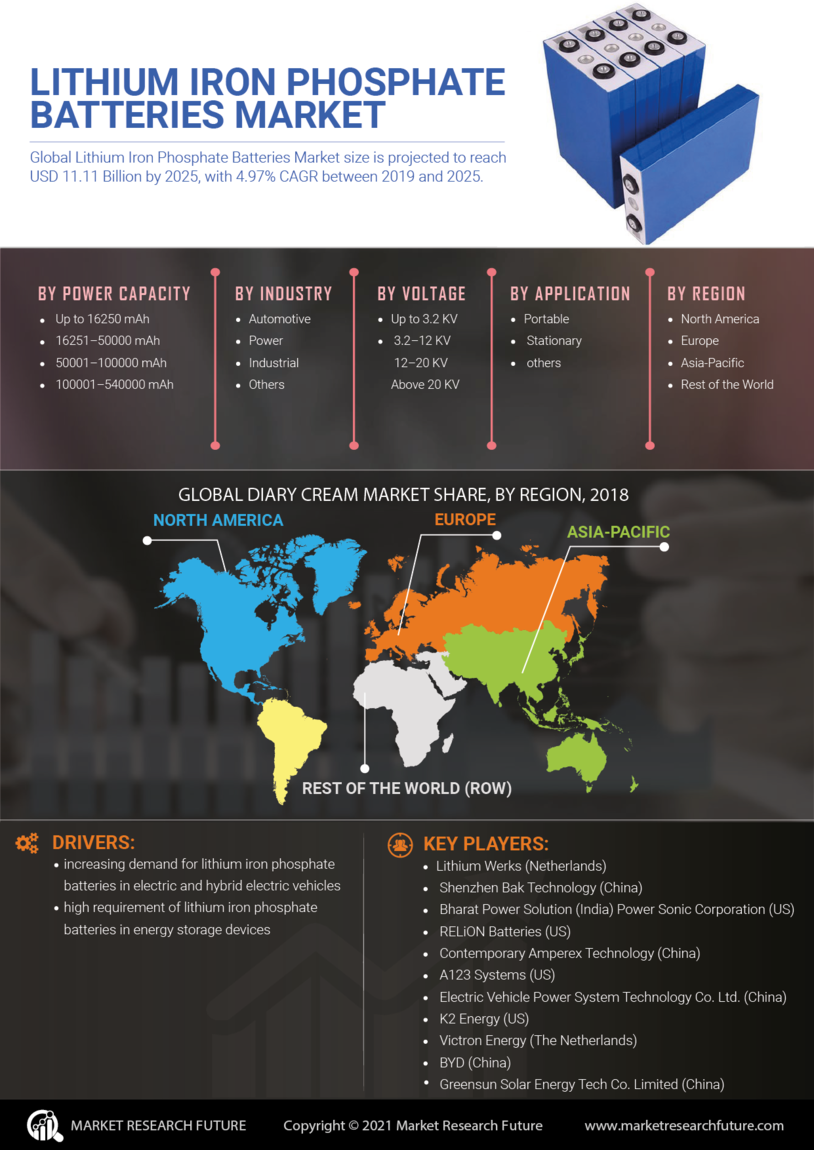 Lithium Iron Phosphate Batteries Market Size was valued at USD 10.4 billion in 2021. The Lithium Iron Phosphate Batteries market industry is projected to grow from USD 10.91 Billion in 2022 to USD 15.33 billion by 2030, exhibiting a compound annual growth rate (CAGR) of 4.97% during the forecast period (2022-2030). Rising demand for lithium iron phosphate batteries in electric and hybrid electric vehicles are the key market drivers enhancing the market growth.

Industries are turning to LFP batteries due to the implementation of strict government guidelines to regulate the increase in environmental pollution. The energy industry is working all over the world to produce renewable energy and store it for the future. Low cost, self-discharge rate, and minimal installation space are the main factors driving the adoption of his LFP batteries in grid and energy storage devices. These batteries are highly resistant to high temperatures, making them ideal for use in remote locations and thermal control applications.

Since the 1990s, the main factor that has slowed the adoption of lithium-ion batteries is their price. Lithium-ion batteries contain many components, and the key element of lithium iron phosphate batteries is the cell, which accounts for 50% of the cost. However, recent developments by lithium-ion manufacturers have contributed to falling battery prices, which will continue to fall. Reducing component costs and introducing advanced technologies to increase battery capacity are key factors driving the growth and adoption of lithium-ion batteries. However, rising demand for other batteries in consumer electronics, electric vehicles, and energy storage systems, such as lead-acid batteries, sodium-nickel chloride, flow batteries, and lithium-air batteries, is expected to stymie the growth of LFP batteries. Furthermore, the introduction of new energy devices, such as flywheel batteries, is limiting market growth.

The Lithium Iron Phosphate Batteries market segmentation, based on industry, includes automotive, power, industrial, and others. The automotive industry segment dominated the market in 2021 and is projected to be the faster-growing segment during the forecast period, 2022-2030. This is due to the increasing preference for metal implants due to their high resistance to corrosion. Automotive sectors, non-traditional power storage technologies which can improve automobile effectiveness and performance are just a major topic of interest. Lithium iron phosphate reactors are anticipated to emerge as the most popular option for an alternative power storing battery pack due to their high energy content and lengthy throughput times. As a result, it is anticipated that increased global growth of the automotive, particularly in China, will drive up the price of lithium iron phosphate batteries. Hence, rising applications in automotive for Lithium Iron Phosphate Batteries positively impacts the market growth.

The Lithium Iron Phosphate Batteries market data has been bifurcated by voltage into Upto 3.2 KV, 3.2–12 KV, and 12–20 KV. The 12–20 KV voltage segment dominated the market in 2021 and is projected to be the faster-growing segment during the forecast period, 2022-2030. It is being used more frequently as storing energy for renewable power sources, clear obvious grid storage units, maritime, or other applications.

Based on application, the Lithium Iron Phosphate Batteries industry has been segmented into portable, stationary, and others. Portable held the largest segment share in 2021, owing to the considerably greater organizational effectiveness. In 2021, the portable application sector held a majority (55%) of the international market. It is explained by the increased need on LiFePO4 batteries coming from the automobile industry, which represents the main source of demand.

Furthermore, as the requirement for storing renewable energy projects grows, the permanent service sector may face competition from the versatile application sector. Due to the necessity to switch toward renewable power sources, such as solar and wind power for environmentally friendly and safe electricity, the stationary usage market is anticipated to have significant expansion within the next few years. It is anticipated that large expenditures will be made across the public and industrial domains as a result of the switch to sustainable energy sources, which will increase the supply of this kind of device.

By Region, the study provides the market insights into North America, Europe, Asia-Pacific and Rest of the World. Asia-Pacific Lithium Iron Phosphate Batteries market accounted for USD 4.56 billion in 2021 and is expected to exhibit a significant CAGR growth during the study period. This is attributed to the rising popularity of electric cars. It's conceivable that manufacturers in India, China, Australia, and Japan, will invest money in LFP cells. The Asia Pacific may offer opportunities for expansion for such energy makers with the increase in the need for computers, cellphones, as well as other electrical gadgets across the region. Moreover, China Lithium Iron Phosphate Batteries market held the largest market share, and the India Lithium Iron Phosphate Batteries market was the fastest growing market in the Asia-Pacific region

The North America Lithium Iron Phosphate Batteries Market is expected to grow at the fastest CAGR from 2022 to 2030. This is due to presence of leading manufacturers. Notably, bullish government policies, including incentives will bode well for regional growth. Increasing sales of EVs are likely to boost the production of LFP batteries.

Major market players are spending a lot of money on R&D to increase their product lines, which will help the Lithium Iron Phosphate Batteries market grow even more. Market participants are also taking a range of strategic initiatives to grow their worldwide footprint, with key market developments such as new product launches, contractual agreements, mergers and acquisitions, increased investments, and collaboration with other organizations. Competitors in the Lithium Iron Phosphate Batteries industry must offer cost-effective items to expand and survive in an increasingly competitive and rising market environment.

May 2022 Arun Plus Corporation Limited and Amperex Technologies Co., Ltd signed Memorandum of Understanding (MOU) in will investigate prospects for collaboration and growth in the rechargeable batteries industry in the Global markets

September 2021 LG Chem's LG Energy Solution is expected to expand its EV battery offering with LFP, which are gaining popularity due to their properties. LFP in Pouch Format will be used in the LG Energy Solution.

August 2021 CATL, a Chinese battery manufacturer, invested $15.60 million in the establishment of a new Shanghai-based automotive science and technology company. The CATL is a well-known LFP battery supplier to Tesla and Nio.

October 2020 Toyota and Panasonic announced a joint venture to build lithium-ion batteries for hybrid cars in Western Japan starting 2022. They believe it could help them meet the growing demand for electric vehicles.

How much is the Lithium Iron Phosphate Batteries market?

The Lithium Iron Phosphate Batteries market size was valued at USD 10.40 Billion in 2021.

What is the growth rate of the Lithium Iron Phosphate Batteries market?

Asia-Pacific had the largest share in the global market

Who are the key players in the Lithium Iron Phosphate Batteries market?

Which industry had the largest market share in the Lithium Iron Phosphate Batteries market?

The automotive industry had the largest share in the global market.

Lithium Iron Phosphate Batteries Market Size Expected to Grow at a CAGR over 4.97% from 2022 to 2030