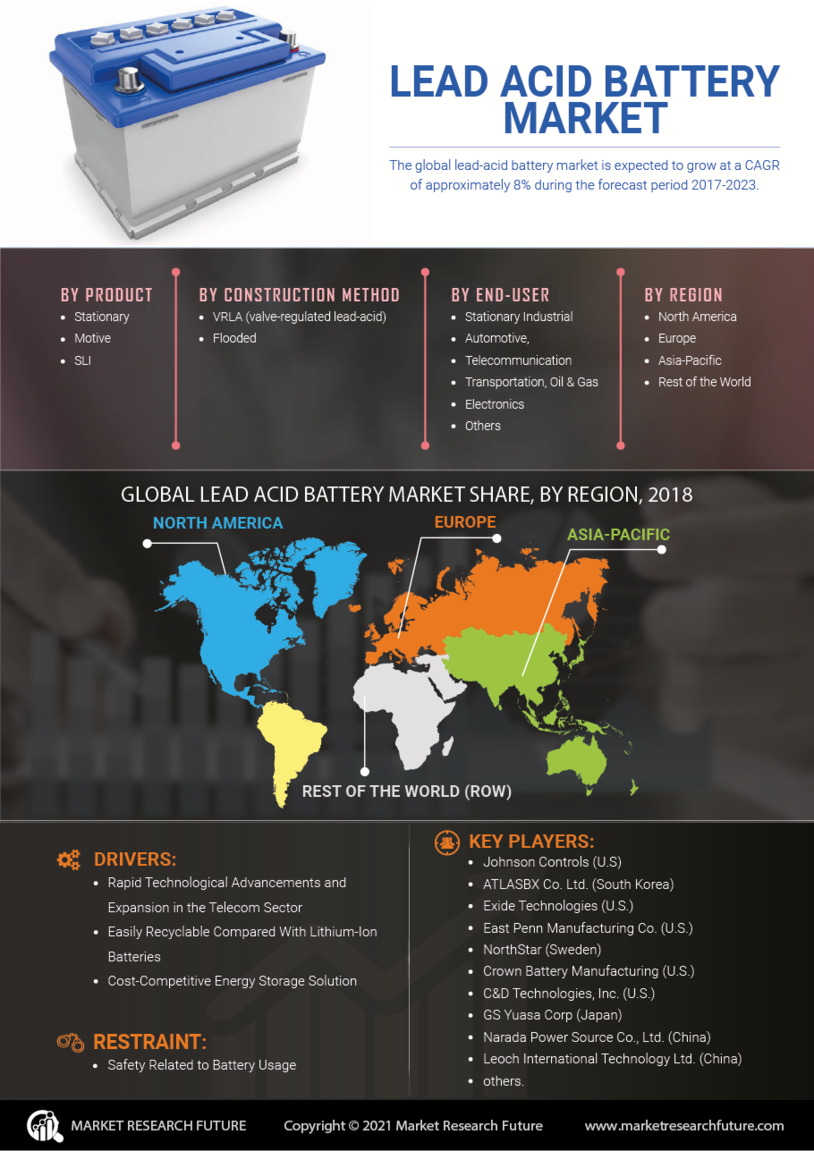 The Lead Acid Battery Market is expected to grow at a CAGR of approximately 8% during the forecast period 2017-2023.

The lead acid battery can be defined as the secondary cell (rechargeable), which is primarily used in cars and trucks. It is most widely used in the power stations and substations because it has higher cell voltage and lower cost.

Technology giants such as Johnson Controls (U.S), ATLASBX Co. Ltd. (South Korea), Exide Technologies (U.S.), and East Penn Manufacturing Co. (U.S.). Johnson Controls is the leading supplier of private label and branded lead-acid batteries for cars, light trucks, and utility vehicles to aftermarket battery retailers. VARTA is the battery brand under Johnson Controls and has been a top-choice premium car battery in Europe. The company has become a benchmark for quality, expertise and precision technology. It’s now becoming a brand, with strong growth in China, Asia, and South America. LTH is the most recognized battery brand under Johnson Controls and has a large presence in Mexico and Central America, where it’s been sold for more than 80 years. It is primarily used in automotive, commercial, taxi, motorcycle, marine, and golf cars to solar lawn and garden applications, LTH batteries offer the most advanced technology and service solutions.

Other factors such as execution of smart grid projects, the emergence of vehicle charging infrastructure, increasing usage of hybrid and electric vehicles, increase in adoption of renewable energy systems and increasing distance of telecom towers are some of the significant factors boosting the lead acid battery market growth.

The low cost associated with the manufacturing of the battery and long-lasting performance is expected to drive the lead acid battery market. However, high lead content in the product can harm the environment, which is expected to hinder market growth. Other features such as the low energy density of these products are anticipated to restrict growth. The emergence of alternatives such as lithium-ion battery in automobiles industry is likely to act as a substitute and challenge the market growth.

The global Lead Acid Battery market is studied in Asia Pacific, North America, Europe, and Rest of the World. It has been observed that Asia Pacific region accounts for the largest share of the market. Owing to promising government regulations that encourage investments from public-private partnerships, foreign direct investments and emerging economies from developing nation such as China, India, and South Korea are expected to fuel the market. The European region is expected to show a considerable growth on account of increasing number of offshore and onshore renewable energy industry in Germany, Italy, Sweden, and the U.K. Furthermore, growing population and increasing disposable income of people in the region are likely to boost the demand for passenger cars, thereby aiding the market growth.

What is the growth scope of the lead acid battery market?

Who are key players of the lead acid battery market?

What are the product types of lead acid battery?

What is the regional analysis of the lead acid battery market?

The automobile industry in APAC experience exponential expansion. Hence, this can cause the APAC lead acid battery market to soar.

Global Lead Acid Battery Market Is Estimated To Grow At A Cagr Of Approximately 8% During The For...