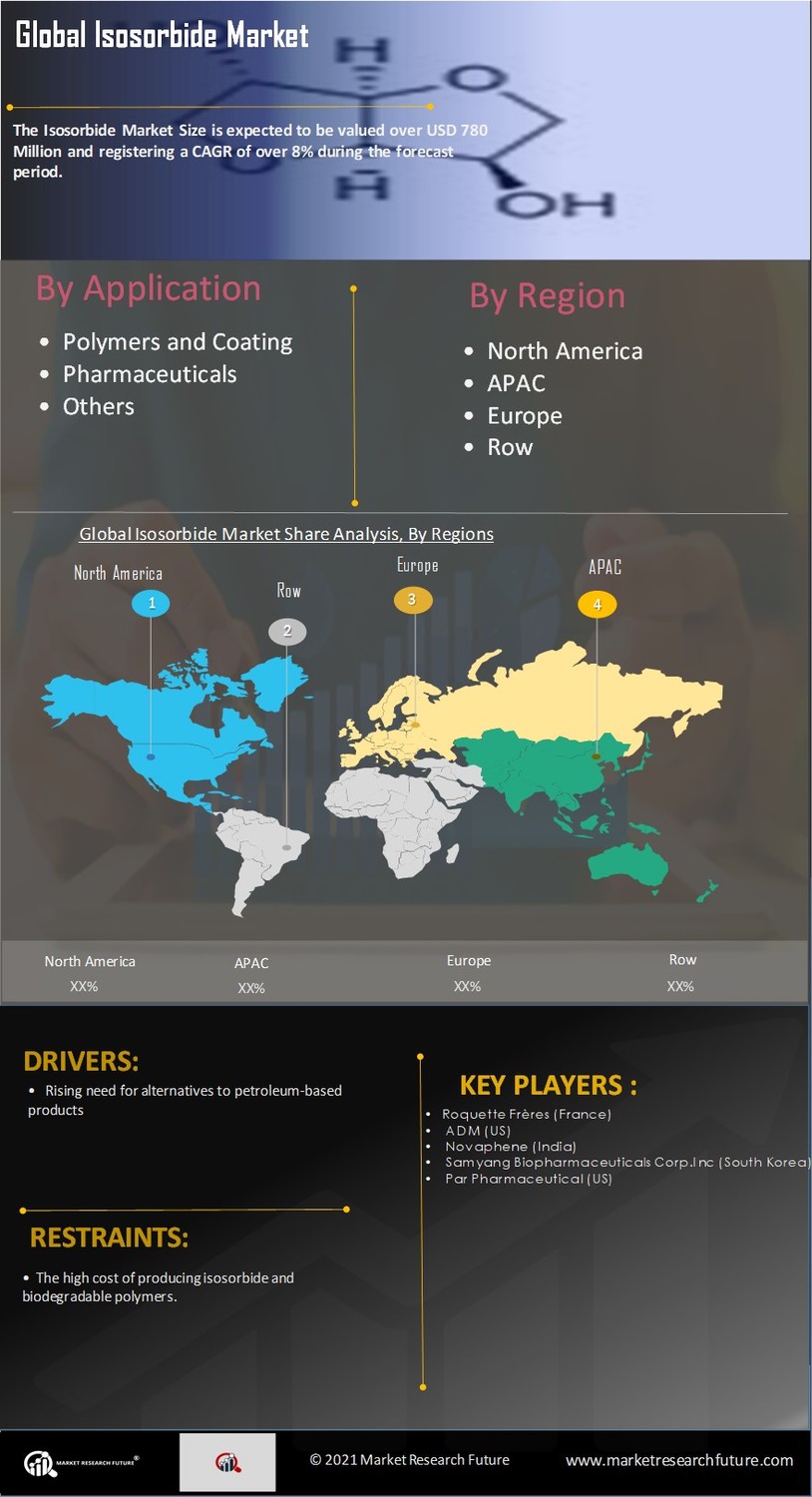 According to the latest research report of MRFR analysis, the Isosorbide Market Size is expected to be valued over USD 780 Million by the end of the year 2027, by registering a CAGR of over 8% during the forecast period 2020 – 2027. Isosorbide is a bicyclic chemical molecule that has two fused furan rings and belongs to the diol and oxygen-containing heterocycle groups. Isosorbide is a cycloaliphatic monomer derived from the dehydration of sorbitol. Sorbitol is a polyol derived from the starch monomer glucose. The majority of starch monomers are obtained from plant-based raw materials such as maize, wheat, and corn. Isosorbide is primarily used as a monomer and additive in the production of polymers and coatings, as well as a raw ingredient in the pharmaceutical sector for medication formulations.

The considerable increase in demand for bioplastics is projected to be the major driver driving isosorbide demand in the Isosorbide Market. Isosorbide-derived bioplastics are being employed in a growing range of applications, including packaging, automotive, consumer electronics, sporting goods, and textiles. The range of applications continues to broaden, with industries such as transportation & automotive, and construction & building seeing substantial development in the foreseeable future. Furthermore, the growing use of bioplastics in these market sectors is being driven by consumers' and brands' increased desire for environmentally friendly goods. This is due to rising awareness of the environmental effect and the need to minimize reliance on fossil fuels, as well as the bioplastics industry's continual developments and developments in new materials with enhanced qualities and new functions.

This report contains all the information on the global Isosorbide market report, research, and market strengths. The report also contains the culmination of dynamics, segmentation, key players, regional analysis, and other important factors. And a detailed analysis of the Isosorbide Market forecast for 2026 is also included in the report.

COVID-19 will have a negative influence on the market in 2020. Because of the outbreak scenarios, construction and automotive industry operations were temporarily suspended during the lockdown, resulting in a drop in the consumption of isosorbide polymer and resins used in the manufacturing of automobile elements such as dashboard and the internal, external radiator grille, and so on & building materials such as ornamental interior surfaces, flooring and so on, that has had a negative influence on sales for the isosorbide market under consideration.


The rising demand from the pharmaceutical and cosmetics sectors, a booming bioplastics industry, and increased use in elastomers and polymers are all expected to be the major driving factor for the Isosorbide Market. The shift in consumer preference for bioplastics, fuelled by increased consumer knowledge about green product consumption, is expected to drive market expansion in the next years.


The growing emphasis on bio-based chemicals has resulted in significant expenditures in R&D, and product innovation with environmentally-friendly qualities is expected to generate new opportunities for market expansion throughout the projection period.


One of the main obstacles to market expansion is the high cost of producing isosorbide and biodegradable polymers. Nonetheless, technical improvements and increased expenditures in bioplastics are expected to drive market development throughout the forecast period. Isosorbide derivatives' health adverse effects, such as irregular heart rate, angina pain, and severe headache, are expected to restrict overall Isosorbide Market growth throughout the forecast period.


Waste recycling strategies are being implemented by industry manufacturers of isosorbide in order to reduce waste emissions during the production of isosorbide. In the coming years, these innovations are expected to lower production costs and provide opportunities for growth for manufacturers.

The PEIT category in the United States accounted for more than 25.0 percent of the market in 2018 and is expected to grow at a rapid pace during the forecast period. Strict EPA rules in the United States are expected to raise demand for isosorbide in the country. Polycarbonate is the second biggest isosorbide market and is expected to grow at a roughly 10.0 percent CAGR by 2025 due to improved optical characteristics. Moreover, it is expected that polyester polyisosorbide succinate (PIS) would expand at the quickest rate in the future.

According to the reports, the Isosorbide Market is segmented into applications, end-users, and regions. On the basis of application, the global market is further segmented into polymers and coating, pharmaceuticals, and others. In 2019, the polymers and coatings segment accounted for around 70 to 75 percent of the market share. Isosorbide is used to make Polyethylene-co-Isosorbide Terephthalate (PEIT) and aliphatic polycarbonates, which are utilized as additives in polyurethanes and epoxy resin coatings. The expanding worldwide demand for these genomics polymers, as well as the growing desire for VOC-free coatings, are likely to drive the polymers and coating segment's growth during the forecast period. In 2019, the medicines segment accounted for approximately 20% of the worldwide isosorbide market share. Isosorbide is used in medicine as a diuretic and to treat cardiac issues. Solvents, adhesives & sealants, and sports & leisure items are included in the other segment.

Based on the Application, the Isosorbide Market is segmented into polyethylene isosorbide terephthalate (PEIT), polycarbonate, polyurethane, polyester polyisosorbide succinate, and isosorbide diesters.

Based on the End Users, the Isosorbide Market is segmented into polymers and coating, pharmaceuticals, and others

According to the reports, on the basis of region, the Isosorbide Market is segmented into North America, Europe, Asia-pacific, Latin America, Middle East & Africa. The Asia-Pacific isosorbide market emerged as the fastest-growing with more than 45 percent share in 2019 and is expected to be the leading regional market throughout the research period. This is mostly due to the product's strong demand in the rising automotive and packaging sectors, as well as the rapidly increasing building industry in major nations such as China and India. The Chinese sector is the largest at the national level. Due to cheap energy prices and the availability of trained labor and raw materials, some players are transferring their manufacturing base to China. Furthermore, the expansion of new recycled materials manufacturing infrastructure in the country is likely to raise demand for isosorbide market share in the regional market. In 2019, the European market accounted for around 25% of the total market share. The regional market's expansion is being driven primarily by favorable rules for bio-degradable plastics and an increased emphasis on the usage of sustainable goods in the packaging and associated plastics sectors.

The major key players are active in the development of bio-based building blocks that can be used in place of traditional platform chemicals. The major corporations are focusing on worldwide company growth in order to achieve a large market share in the worldwide sector. Roquette is the world's largest manufacturer of the Isosorbide Industry, and it operates along the value chain, producing starch, isosorbide, and biopolymers.

At what CAGR is the Isosorbide Market predicted to grow during the forecast period?

Isosorbide Market is predicted to grow at 8% through forecast period of 2020-2027.

What is the forecast period of Isosorbide Market research report?

The forecast period for Isosorbide Market research report is 2020-2027.

Which region will lead the global Isosorbide Market?

Who are the key players in the Isosorbide Market?