The Hydrophilic Coatings Market is primarily driven by the increasing demand for controlled lubricity of medical devices surface. Hydrophilic coatings can be used in guidewires, catheters, and cannulas and reduce the occurrences of inflammation and damage caused by these devices when used on a patient. These coatings react with water and form a hydrogel material, which reduces insertion force and avoids possible puncture damage and makes it suitable for biological interactions. They exhibit antimicrobial properties and are biocompatible in nature thus preventing any chances of infections. The use of hydrophilic coatings as an anti-fog agent in automotive parts such as windshields and rear-view mirrors is likely to fuel the market growth further. These coatings are also used in ophthalmology for placing intraocular lenses (IOLs) devices to reduce the catastrophic bursting incidences and incision size. They are also used in optical devices such as camera windows, outdoor surveillance, and others. The demand for these coatings is rising in the marine industry as they reduce the kinematic friction between the coated boats and water surfaces. However, stringent regulation from the Food and Drug Administration (FDA) for 510K Clearance is likely to challenge the Hydrophilic Coatings Market Growth. Nevertheless, the opportunities and development trends that can offer better growth are observed in the market include the drug delivery and biological interactions of hydrophilic coatings. In October 2016, Surmodics, Inc. announced the launch of a single coat formulation Serene Solutions, which meets the challenge of achieving the right balance of lubricity and durability of intravascular products. Other instance of the development of the market is the merger of AdvanSource Biomaterials Corp. with Medibrane, Ltd. in January 2017. 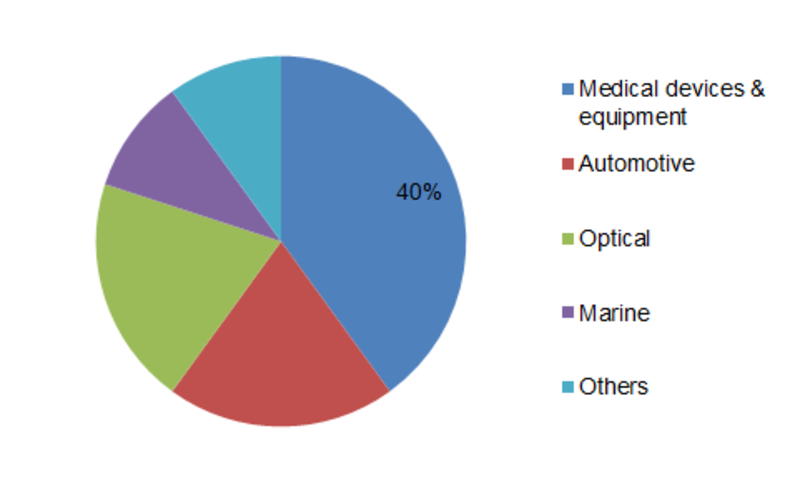 Asia Pacific is the fastest emerging region in the Hydrophilic Coatings Market on account of the high production and sales of automotive and medical devices in the region. The emerging medical devices and equipment market is expected to reach USD 88.6 million by 2020. The growing automotive industry in India and China is likely to drive the global market further. The growing marine industry in China and Japan is another driver of the market.

The North American regional Hydrophilic Coatings Market is growing on account of the high production and exports of medical devices and reviving the automotive industry.

Increasing expenditure on better medical & healthcare facilities in Europe is expected to drive the Hydrophilic Coatings Market. The increasing production and exportation of automotive parts in Germany, the U.K, and other countries is anticipated to further fuel the market growth.

The increasing production and sales of automotive in Brazil is the major factor driving the Hydrophilic Coatings Market in the Latin American region.

The Hydrophilic Coatings Market is segmented on the basis of the substrate, application, and region.

The Hydrophilic Coatings Market is segmented on the basis of the substrate as polymers, glass & ceramics, metals, nanoparticles, and others.

By the Application, the Hydrophilic Coatings Market is segmented into medical devices & equipment, automotive, marine, optical, and others.

What are hydrophilic coatings?

What are the major applications of hydrophilic coatings?

Growing demand from the medical devices and automotive industries is the major driver for the hydrophilic coatings market.

Asia Pacific is the most prominent regional market due to the growing industrialization in the region.

Leading market players in the hydrophilic coatings market include Hydromer, Abbott, and Corning Inc., among others.