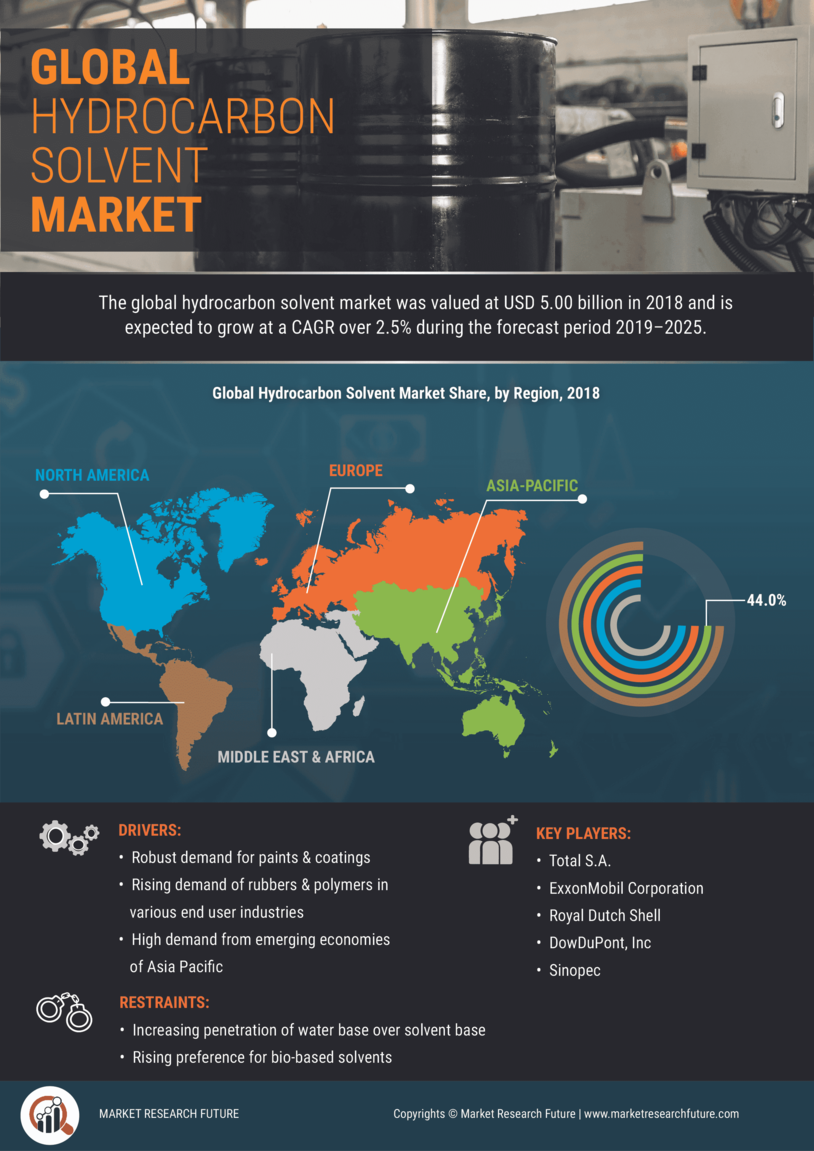 Hydrocarbon Solvents Market size was assessed to reach an estimated value of USD 6.18 Bn by the conclusion of 2023 while escalating growth at a CAGR of 2.85% in the forecast period.

The global hydrocarbon solvents market is projected to reach 8,589.8 thousand tons roughly in terms of volume in the forecast period. Despite the considerable need for hydrocarbon solvents in the paint & coatings industry, augmented water-based products' penetration continues to threaten the market's prospects.

The amplified worth of digital technologies in the workplace is changing the workforce in the hydrocarbon solvents industry. The companies in the market have seen a state of surplus in individual market segments. The market customers are employing a higher worth on sustainability and considering products based on circuitousness and carbon footprint. The start of COVID-19 has further stressed the automotive and construction sectors. Efficiency gains and increased reliability have primarily driven the upsurge in oil, gas, and chemicals businesses' deployment of digital technologies. Enhanced optimization of operations. The resulting closure of plants and worksites, companies' existing digital technologies provided an advantage with the sudden arrival of COVID-19. The hydrocarbons industry trends have decelerated considerably and will continue to and eventually reverse. It may still not be satisfactory for the isolated working and cybersecurity level that was unexpectedly vital. Specific vital trends are being fast-tracked due to the crisis, redesigning both supply and demand through chemicals and materials. Finally, the inclinations that were vital before the pandemic will likely remain for the foreseeable future.

The tire industry's growth is reproduced in the hydrocarbon solvents market's balanced growth due to its primary tire production application.

The APAC region's demand has risen considerably due to expansion in the consumer base through the impending period.

Mounting Infiltration of Water Base Over Solvent Base

The application in industrial cleaning is projected to generate promising future growth in the hydrocarbon solvent market.

The aliphatic segment reports for the principal market share between these two segments and is expected to grow at the highest CAGR during the assessment period. The segment's market advantage is principally due to the collective requirement for aliphatic hydrocarbon solvents in industrial paints and coatings, price, low toxicity, and other promising factors. The use of Aliphatic solvents is likely to surge as they have relatively lower toxicity level and thus can be exploited in a diverse range of industrial applications.

The mounting demand for solvent-borne industrial paints and coating have propelled the paint & coatings segment into a strong position. This segment is anticipated to uphold its spot in the course of the forecast period.

APAC Region to Hold a Primary Stake in Market

The hydrocarbon solvents market has been consistently run by the Asia Pacific and is expected to maintain its market lead throughout the forecast period. The region has appeared as the principal producer for income and volume for the hydrocarbon solvents market. The region is anticipated to attain the highest CAGR throughout the forecast period due to the enormous paints and coatings industry in the region perceiving a high demand for hydrocarbon solvents. Furthermore, the building and enhancement of infrastructure in this region's developing economies have augmented the product's need.

European Region to Be Spurred By Automotive Sector

The central contenders in the hydrocarbon solvents market are:

Dec 2020 The Special Fluids business component of Total, one of the important hydrocarbon fluids creators for industry, has commenced BioLife, a variety of renewable, pure, and biodegradable isoparaffins in the UK market. They have been developed in retort to calls for more sustainable and environmentally friendly products. BioLife bio-based hydrocarbon solvents deliver a safe, sustainable, and odorless substitute to other conventional fossil-based solvents. BioLife can be used in degreasing, paints & coatings, lubricants, and hydraulic & metalworking fluids. The usage of patented high-pressure hydrogenation HDA technology combined with narrow-cut distillations means.

July 2020 VIVA Energy, one of Australia's biggest energy companies and the Shell brand's licensee in Australia, will shape a liquified natural gas facility, solar generation, hydrogen production, and a novel fuel storage capability at Geelong under schemes stated at its annual general meeting. The 235-hectare expansion is in its last design stage, will generate an energy center that would raise the supply of natural gas to Victoria and lead to proposals such as hydrogen manufacture and gas-powered electricity creation. Viva's current plant at Geelong creates more than 50% of Victoria's liquid fuel supplies and is Australia's single bitumen manufacturer, hydrocarbon solvents, and avgas.

What will be the possible market valuation of hydrocarbon solvents market?

The global hydrocarbon solvents market is predicted to touch USD 5200 million by 2023.

Which region is predicted to lead the hydrocarbon solvents market?

Asia Pacific is predicted to lead the hydrocarbon solvents market during the forecast period.

What are the key factors driving the growth of the hydrocarbon solvents market?

Growing demand from the construction and automobile industry is boosting market growth.

Which factors may limit the hydrocarbon solvents market growth?

Preference for bio-based solvents and strict regulations imposed by SEPA, EPA, and EU on the use of these solvents may limit the market growth.

Who are the key players profiled in the hydrocarbon solvents market?

Among the aforementioned companies, Total S.A., ExxonMobil Corporation, Royal Dutch Shell, Sinopec, and BP Plc collectively account for the lion’s share of the markey. The global hydrocarbon solvents market is fragmented and is lacking a substantial presence of the established tier-1 companies. Asia Pacific and Europe remain the two most important markets for hydrocarbon solvent, and global players are focusing on these two regions for business expansion by building new petrochemical plants or by investing in solvents unit of local players. The industry players are adopting collective approaches such as acquisition and expansion to increase revenue and leverage the opportunities existing in the market due to presence of limited competition.

Exxon Mobil Corporation is one of the five leading players in this market. Exxon Mobil Corporation acquired world’s largest aromatics plant, i.e., Jurongs aromatics plant in August 2017. The acquired production facility is capable of producing 1.9 million tons of ethylene, which would complement Exxon Mobiles olefin production capacity. This acquisition is likely to complete company’s aromatic solvent business over the next three financial years.

British Petroleum operates as an integrated oil and gas company globally. The company is one of the world’s largest oil & gas organizations. It operates through two core business segments: upstream and downstream. The upstream segment deals with oil and natural gas exploration and production, and transportation activities. Whereas, the downstream segment includes refines, manufactures, markets, transports, supplies, and trades in crude oil, petroleum, and petrochemicals products and related services.

The company also has a stake in Rosneft, a a Russian integrated energycompany headquartered in the Russian capital of Moscow. Through Rosneft it engages in the production of hydrocarbons in the United States, Canada, Vietnam, Venezuela, Brazil, Algeria, the United Arab Emirates, Turkmenistan, and Norway and offers jet fuel, bunkering, bitumen, and lubricants.

Sasol is a global leader in chemicals and energy based in South Africa and has operates across 33 countries. The company engages in the development and commercialization of technologies and operate world-scale facilities to offer a wide range of products including liquid fuels, chemicals, and low-carbon electricity. The company comprises business units namely mining & exploration, and production of oil & gas activities. The company focusses on its key strategies, some of which are expansion of business through the construction of new plants and facilities, technology up gradation in the field of coal mining, and focus on the chemicals business in the U.S. by leveraging existing technology.