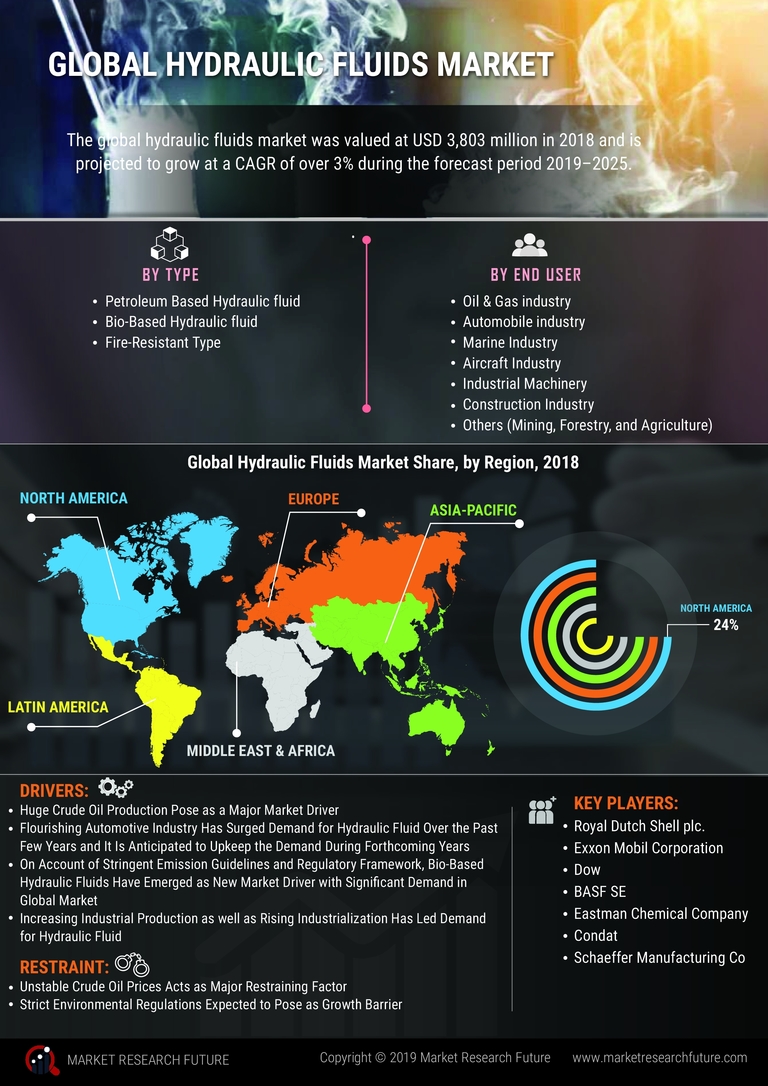 The Hydraulic Fluid Market is projected to grow at 2.91% CAGR during the forecast period.

In addition, the global hydraulic fluid market is expected to increase at a CAGR of 2.91%, with a significant value over the estimated forecasting year of 2022-2030.

Hydraulic fluids are a class of lubricants that flow in multiple directions, each tailored for a specific portion of your car or machinery. It is the foundation fluid utilized in many areas of your vehicle to provide a flow of force and protection by utilizing the force of the real non-compressing Fluid. Hydraulic Fluid has several superior qualities such as higher temperature stability, longer life, and performance than standard turbine oil, higher viscosity, and others. Because of these features, hydraulic Fluid is used in various sectors, including oil and gas, chemical production, automotive, and others.

These fluids are utilized as different items in the overall vehicle system, such as engine oil, gear oil, brake fluid, and others, to improve the entire life cycle of a vehicle by decreasing friction between surfaces and removing heat created by the automotive component. Furthermore, hydraulic fluids have improved hardware compatibility with sophisticated automobile parts, and they aid in reducing vehicle pollutants. As a result, an increase in automobile sales stimulates the use of hydraulic fluids, promoting market development. The significant expansion in the global automobile sector presents a bright picture for market growth. Hydraulic fluids are widely used in various areas of the vehicle, including power steering systems, engine oil, gear oil, brakes, and clutches, to create force, protect against chemical reaction erosion, and reduce friction between components, thereby contributing to the overall life cycle of the automobile. Following this, hydraulic fluids are extremely compatible with sophisticated automobile parts, which aids in the reduction of vehicle emissions. Aside from that, product developments such as introducing biodegradable hydraulic fluids that are ecologically sensitive, non-toxic, and environmentally friendly are driving market expansion.

The coronavirus standard had a detrimental influence on various businesses, notably the hydraulic fluids market. Due to the financial issues that occurred during the onset of coronavirus, both the public and government sectors suffered tremendously. Businesses were forced to close in several nations due to the social distancing restrictions and lockdown. Due to manpower scarcity, the hydraulic fluids business encountered significant challenges, resulting in reduced production. Hydraulic fluid demand fell due to constrained output and industry shutdowns in industries such as oil and gas, building and construction, and chemical, among others. However, the hydraulic fluid market is likely to rise with the coronavirus environment.

The coronavirus pandemic outbreak has led to a temporary prohibition on import and export, interrupting the supply chain and decreased hydraulic fluids market trends in the second, third, and fourth quarters of 2020. However, the industry is likely to rebound in late 2018 or early 2021 when activities in numerous industries such as manufacturing, construction, aerospace & military, and others resume.

The Chief Factors Existing in the Market:

On the other hand, Crude oil is a basic ingredient that is utilized as a building block in the creation of synthetic lubricants such as hydraulic fluids. The rise in crude oil prices has a significant impact on the pricing of all lubricants. Oil costs are likely to climb as the United States imports massive volumes of oil and the number of automobile owners, particularly in China, rises.

The most significant difficulty for any company in the world is how to tackle this worldwide epidemic. Because of the global health emergency, every country has closed its borders, making commercial activity impossible. As a result, most industrial manufacturers are losing a lot of money, while other investors want to offer new market participants a chance to make up for their losses.

Almost everyone in today's society is aware of the worldwide pandemic and its influence on the global hydraulic fluid market. However, following the lockdown, the market has been vastly opened. To meet the clients' demand, every company wants to focus on the effort of increasing the production rate, which ultimately creates a great opportunity for those who want to set up shop in the modern hydraulic fluid market growth.

The rising cost of labor and a scarcity of industrial raw resources have had an impact on the rate of production. As a result, most investors wish to offer the industry's most notable companies a chance to raise their production rates.

The expansion in the number of emerging technologies and the great growth of hydraulic fluid market sectors have had a massive impact on the worldwide sectors. Following the shutdown, the hydraulic fluid market reopened, bringing fresh faces of market investors and shareholders eager to increase output by utilizing innovative technologies. During the worldwide pandemic, most investors concentrated their investments in emerging company areas where competition was strong. During the shutdown, the global market suffered a significant revenue loss. Most of the leading hydraulic fluid market players have continued to increase output to fulfill global demand while also overcoming the major hurdle posed by this pandemic condition.

According to the latest hydraulic fluid market analysis report, the market has been segmented into type, end-use industry, and regional sectors. The type section classified the market into petroleum-based hydraulic fluid, bio-based hydraulic fluid, and fire-resistant types. In the end-use industry, the market is classified into six sections: oil & gas, automotive, marine, aerospace & defense, construction, and others. The global market is further divided into five sections: Asia-Pacific, North America, South America, Europe, and Middle East & Africa with the regional section.

The Asia-Pacific region is likely to lead the hydraulic fluids market during the projected period. This tendency might be ascribed to the region's growing industrial sector, opening up new investment prospects. In 2019, new building projects in Japan occupied 127.55 million square meters. Residential and commercial development in India has increased as the country's service industry has grown. According to the Ministry of Housing and Urban Affairs, the Indian government announced an investment of around USD 27.54 billion for the building of 100 cities under the Smart Cities initiative.

The Chinese aerospace sector is one of the country's main industries, and the government is significantly investing in expanding local manufacturing capabilities. Furthermore, over the next 20 years, Chinese airlines expect to acquire around 7,690 new aircraft valued at approximately USD 1.2 trillion. In recent years, Asia-Pacific has dominated global vehicle production. However, the decrease in the region's car sector has severely impacted the market. With a manufacturing volume of 25.75 million vehicles, China is the world's largest automaker.

Following the lockdown, the foreign market expanded and opened significantly, and as a result, many new faces have emerged in the global economic and industrial sectors. According to this, the rate of manufacturing has increased dramatically. To fulfill the worldwide people's needs, every industry is experiencing fierce rivalry in their area to provide a suitable output level. Investors are likewise eager to invest in the market's most notable companies.

The major industrial players in such industries are:

All of the research reports examine the demand-supply facts, price structure, manufacturing rate, value chain, and other major elements influencing the growth of the worldwide biopolymers market. This research also includes a geographical analysis, which gives comprehensive information on market shares, values, and various market revenue sectors. This study report is filled with strategic market development and the influence of a worldwide pandemic on the current market condition.

What is the purported growth rate of the global hydraulic fluid market?

What is the major driver of the global hydraulic fluid market?

Rising production of crude oil is the biggest driver of the global hydraulic fluid market.

What is the biggest challenge facing the global hydraulic fluid market?

Who is the biggest end-user of the global hydraulic fluid market?

The oil & gas industry is the biggest end-user of the global hydraulic fluid market.