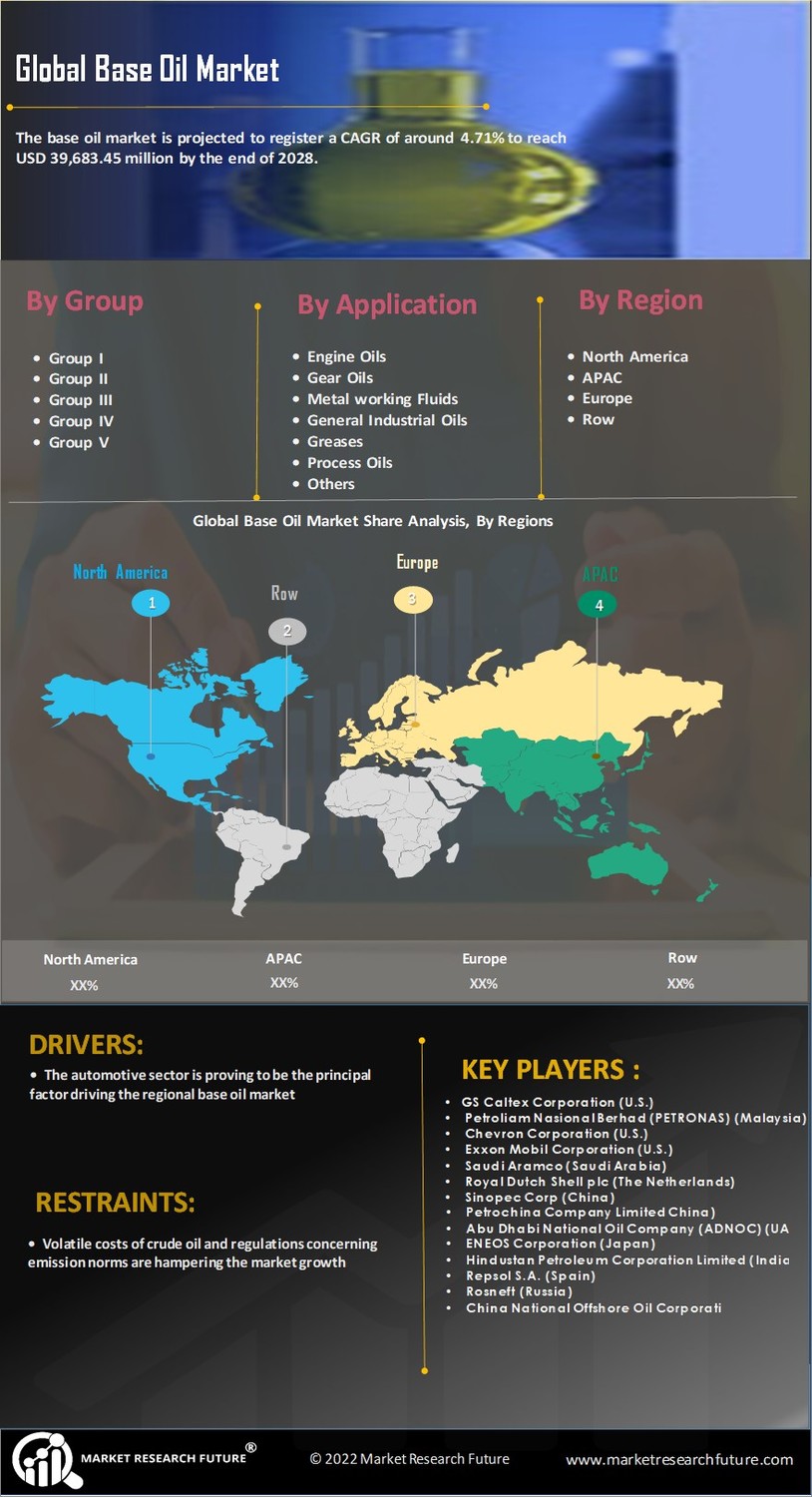 Base oil forms the basic constituent of any lubricant or grease used across the world. Various additives are added to the base oil to obtain lubricants. These additives help in improving viscosity, hydraulic stability, high-temperature performance, and cleansing properties of a lubricant. On the other hand, grease is obtained by blending base oil with additives and thickener. Base oil is primarily synthesized by refining crude oil. However, some of the base oils are derived from vegetable oils and manmade synthetic oil sources.

According to various studies, more than 70% of all lubricant requirements in the world annually are met with the use of mineral oil-based fluids. The lower cost has been the primary factor responsible for the demand for mineral-based lubricants throughout the world. However, the use of these lubricants is beset with the problems of oxidation and acid development and facilitate the formation of sludge, particularly in high-temperature applications. Furthermore, these lubricants exhibit irregular surfaces at the molecular level and generate friction within the fluid, increasing power requirements and reducing efficiency. As a result, synthetic oil-based lubricates such as PAO (Polyalphaolefin) are gradually replacing mineral oil-based lubricants

PAO (Polyalphaolefin) -based lubricants are used extensively in automotive applications as well as hydraulic, gear, and bearing oils, working in extremely cold or hot climates. They are also employed as base fluids in some wide temperature range greases. With growing sales of modern automobiles in Asia-Pacific and growing demand for fuel-efficient vehicles is expected to drive the demand for synthetic lubricants such as PAO (Polyalphaolefin) and thereby the demand for synthetic base oil over the forecast period.

In order to reduce the dependence on fossilfuel-based feedstock, major manufacturers are making significant investments in R&D activities to develop renewable base oils. For instance, Novvi LLC based in California, US, has developed ultra-high performance base oils derived entirely from renewable plant oils. This base oil is designed to meet the next generation of OEM (Original Equipment Manufacturer) requirements. Additionally, it is expected to help lubricant manufacturers to lower carbon footprints and help achieve carbon neutrality targets.

Crude oil forms as a basic raw material for the base oil production process. The outbreak of the COVID-19 pandemic and subsequent implementation of lockdown strategies resulted ina steep fall in demand for crude oil and petroleum products across the world. According to Rystad Energy, the crude oil demand fell by around 27 million barrels per day in March 2020. Major oil-producing countries across the world were forced to cut down on production by a significant margin. Additionally, the disruption of shipping lines across the world curtailed the crude oil supplies to base manufacturers and forced them to cut their refining and production capacities.

The demand for passenger cars and commercial vehicles underwent a steep decline across the world. Moreover, the implementation of lockdown strategies caused a massive fall in demand for automotive lubricants, thereby adversely impacting the global base oil demand. Additionally, the restrictions of functioning of industrial production facilities hampered the use of industrial lubricants and base oil.

The global base oil market has been segmented on the basis of group, application, and region.

Based on group, the global base oil market has been divided into Group I, Group II, Group III, Group IV, and Group V. Among these, the Group II base oil segment accounted for the largest share of the global base oil market in 2020.Moreover, the Group II base oil segment is expected to grow at the fastest pace over the forecast period. Changes in automotive engine designs demand more versatile lubrication systems. Additionally, the adoption of strict emission control norms such as Bharat Stage IV (BS-IV) in India and China 6 in China is expected to fuel the demand for Group II base oils due to their versatility and superior performance attributes. The Group IV base oil segment is projected to grow at a significant pace owing to the growing adoption of synthetic oil in the automotive industry.

On the basis of application, the global base oil market has been segmented into engine oils, gear oils, metalworking fluids, general industrial oils, greases, process oils, and others. The other applicationsof the base oils include agriculture, additives, and detergents/dispersants.In 2020, The engine oil segment emerged as the largest application segment due to the wide-ranging use of engine oils across automotive, power generation, and industrial machinery applications. Engine oil plays a key role in protecting overall engine assembly by reducing friction and protecting against corrosion. Growing focus on energy efficiency and downtimes have been driving the demand for engine oils and thereby driving the growth of global base oils market.

The global base oil market has been studied across North America, Europe, Asia-Pacific, Latin America, and the Middle East & Africa. With over 60% share, Asia-Pacificemerged as the largest market for base oilin 2020 and is expected to grow at the fastest pace over the forecast period. The automotive sector is proving to be the principal factor driving the regional base oil market.Key countries in the region, including India, China, and Indonesia, have emerged as the fastest-growing markets for passenger cars and commercial vehicles in the world. These countries are projected to generate significant demand for automotive lubricants in the coming years, thereby boosting the Asia-Pacific base oil market. Additionally, presence of largescale metalworking industry and capital goods manufacturing sector is generating a major demand for metalworking fluids and thereby the demand for base oil.

Europe emerged as the second-largest market for base oil in 2020.The presence of a well-developed automotive and industrial sector was the primary factor driving the base oil demand within the region. Additionally, the robust growth of the metalworking industry is expected to positively impact the European base oil market in the upcoming period. Planned adoption Euro 7 emission control norms in 2025 is expected to drive the demand for synthetic engine oils within Europe and thereby drive the demand for Group IV base oils over the forecast period.

North America is the leading producer and exporter of base oil across the world. The discovery oflarge-scale shale oil reserves and significant investments in expanding refining capacities are two of the primary reasons driving the base oil production within the region. Growing incentives for domestic production of industrial and automotive goods in the US leads to a resurgence of the North American manufacturing industry. This ongoing recovery of the manufacturing sector is expected to generate significant demand for automotive and industrial lubricants and thereby the demand for base oil over the forecast period.

The Middle East & Africa region has also emerged as one of the significant suppliers of base oils to the world. Presence of large-scale crude oil production and refining capacities has been the primary factor for the growth of base oil manufacturing industry within the region.

Global Base Oil market, by Group


Global Base Oil market, by Application


Global Base Oil market, by Region

Recent Developments In September 2021, Gatik and Goodyear announced a multi-year collaboration to advance mobility solutions for the sovereign B2B short-haul logistics industry. Both the firms say the partnership will contribute to more sustainable and safer goods movement while lowering costs for Gatik's customers nationwide in the B2B short-haul market.

At what CAGR is the Base Oil Market predicted to grow during the forecast period?

What is the key players of Base Oil Market research report?

Which region will lead the global Base Oil Market?

Global Base Oil Market is dominated by APAC region.

Growth of Automotive Industry and Adoption of Stringent Vehicular Pollution Norms Across the Worl...