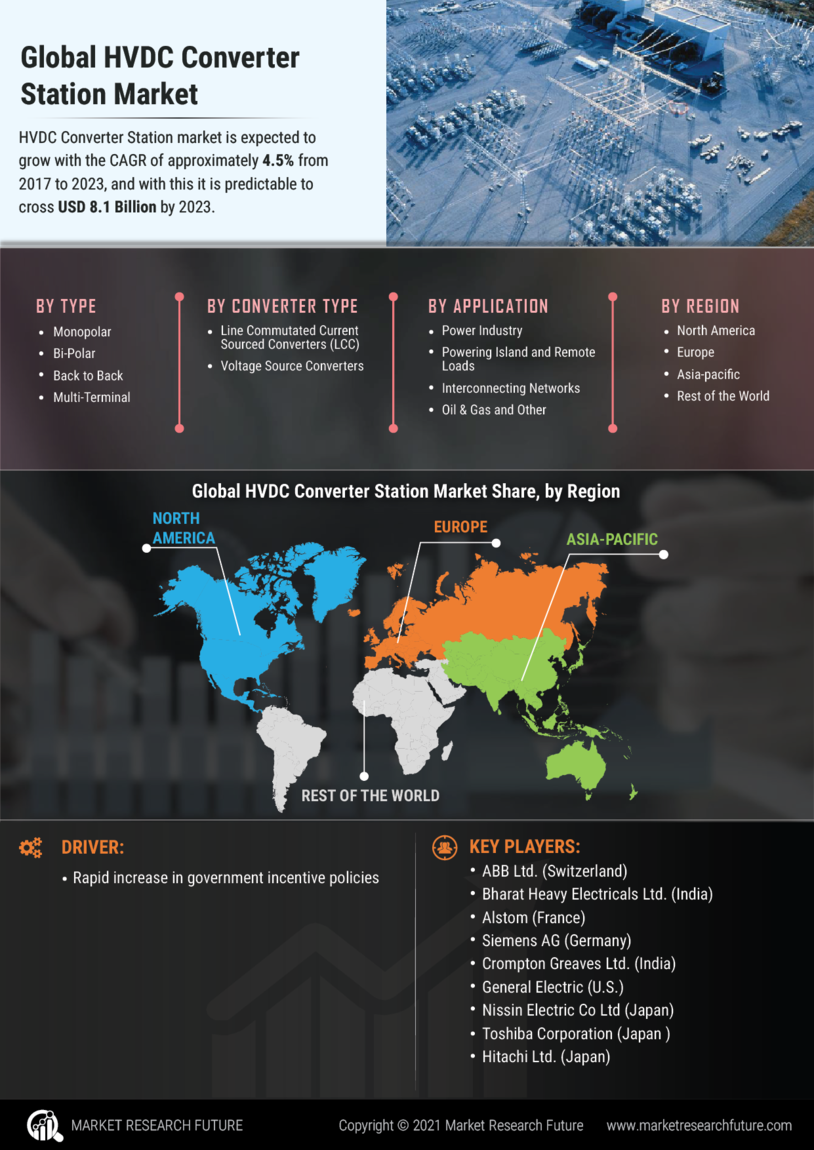 HVDC Converter Station Market is expected to grow at a CAGR of 4.5% to reach USD 8.1 billion by 2027

The >2000 M.W. segment is driven by the development of the power transmission capacity of valves, because of which significant economies such as the APAC region including countries like India and China have led to high demand for HVDC converter stations. Moreover, the European Union's targets for power generation through renewable resources have created an increasing demand for connecting renewable power sources to the grid, further expected to drive the demand for HVDC converter stations in Europe.

The HVDC converter market report suggests that the HVDC Converter Station market size has been affected by the rising cases of the novel coronavirus with each passing day. The pandemic outbreak is a new-age difficulty that significantly impacts the production and manufacturing ability of the players to produce as per the demands of the HVDC Converter Station Market audience. Almost all the HVDC Converter Station market players fabricating the equipped engines have been struck as they manage circumstances like contracting interest, falling costs, and lack of resources and crude materials. The global governments have been witnessing the emergence of various market issues, and hence, they have to go for strict restrictions and the imposition of lockdown. The outbreak is a monetary emergency being experienced during the COVID-19 pandemic outbreak in recent times.

The rising cases and alarming market fatalities have forced the global governments to get their hands and investments and put the same for developing new market products, lines, and services. Also, the HVDC Converter Station market players opt for developmental steps like mergers and acquisitions, followed by others like investments and funding to compete in the international market and expand globally.


The stability of power systems in long-distance transmission has always been the primary concern. The HVDC converter market trends suggest that the interruption caused by power failure results in economic losses and disrupts the life of the consumers. Owing to its various ongoing technological advancements, HVDC technology is increasingly used to transmit more power over long distances. The development of converters has enhanced the reliability of transmission grids. As a result, HVDC transmission lines cost lesser than HVAC lines for the same transmission capacity. However, the terminal stations in the case of HVDC are more expensive since they perform A.C. to D.C. conversion and vice versa.


Transmission from several neighboring grids sometimes requires the government or local authority's approval to check the converter station's standards. Sometimes the reviewing and approval process takes time, and it eventually affects the transmission of electricity and working of the converter station. As a result, it affects power generation in some places, resulting in a lack of electricity. Thus, this standard procedure sometimes creates unnecessary problems for the HVDC market and end-users. For instance, the Plains and Eastern Clean Line project took almost seven years of reviews, community meetings, and regulatory approvals from multiple agencies, including DOE and the Tennessee Regulatory Authority.


The growth of the offshore wind sector is expected to be primarily driven by favorable government policies implemented by EUROPA, the Global Wind Energy Council (GWEC), and PGCIL. Grid operators have an increasing demand for a new transmission corridor in India, especially for renewable energy sources. Therefore, the government has emphasized regeneration in this context and has nominated PGCIL to develop an environmentally friendly source for generating electricity from solar and wind power projects. High investments by market leaders, including ABB and Siemens, have led to offshore HVDC power transmission systems in countries such as Norway, Italy, and the Netherlands.

Looking at the latest research analysis, the HVDC Converter Station industry can be bifurcated based on type, components, power ratings, converter type, and applications. Out of all the segments of this market, the Line Commutated Converters (LCC) segment will witness tremendous growth during the forecast period. It can be used in HVDC transmission of bulk power as an alternative to using a hundred M.W.s.

If we look at this industry, then based on type, it is categorized as bi-polar, multi-terminal, monopolar, and back to back.

Based on components, it has a valve, reactors, harmonic filters, circuit breakers, surge arresters, and converter transformers.

Based on converter-type, it has Voltage Source Converters (VSC) and Line Commutated Current Sourced Converters (LCC).

Based on the application, it has Oil & Gas, Powering Island and Remote Loads, power industry, Interconnecting Networks, and others.

If we look at the HVDC Converter Station market share and other details, this industry is remarkably working in five major regions of the world that is Asia Pacific, Europe, North America, Latin America, Middle East, and Africa. During the forecast period, the European region will dominate this market due to a rise in demand for power and the number of offshore wind farms. The United Kingdom and Norway are the major countries that will lead the growth of this market by the end of the research period. Asia Pacific region will also witness noteworthy growth and will be the second-largest market. The factors such as increasing demand for electricity and rising growth in the generation of renewable energy will contribute to the maximum growth of this market in this region. Developing countries such as China and India will be leading the growth of the HVDC Converter Station Market in this region.

The prime players of the HVDC Converter Station market are applying various types of strategies such as mergers, acquisitions, partnerships, collaboration, and others to boost their businesses. These steps taken by the companies are creating a competitive environment among key players present all around the world. Based on the data obtained from the HVDC Converter Station industry analysis, the prominent players in this market are:-

The HVDC Converter Station market report presents a shift analysis that tells about the various market drivers, opportunities, and restraints accessible in the HVDC Converter Station market. This market report also tells its readers how this market was affected during the covid-19 period. Furthermore, the report also discusses how this market has been categorized into different segments, how a healthy competitive environment is evolving among the different key players of this market, and what factors this market will grow in different regions of the world. Lastly, this report shares some recent developments in this market in the last few years.

At what CAGR can the HVDC converter station market surge?

What is the estimated valuation for the HVDC converter station market?

By 2023, the HVDC converter station market can generate a turnover of USD 8.1 Bn.

Who are key players of the HVDC converter station market?

What are the HVDC converter station market drivers?

The growing concern over the need to curb carbon emission can impel the global market of HVDC converter stations.

What is the regional analysis of the HVDC converter station market?

In APAC, the high installation rate of HVDC converter stations can cause the regional market to surge.

Global HVDC Converter Station Market is expected to grow at 4.5% CAGR by end of year 2030.