Balanced rotors are used in HVAC motors to decrease vibrations and provide quiet operation. The power rating of these motors typically ranges from 0.18 kW to 75 kW. Furthermore, the horsepower of these motors might range from 0.25 to 100 horsepower. Heavy-duty industrial and commercial end-use industries are the most common applications for these motors. Various motors are utilized in ventilators, direct-drive and belted fans, exhaust fans, air conditioning units, unit heaters, and refrigeration condensers, among other applications in these end-use industries. These motors are also utilized in variable torque electronic controls, which are employed to save electricity in the end.

The growing need for HVAC systems to minimize energy consumption, as well as the implementation of different government rules and policies aimed at energy conservation, are projected to propel the worldwide market forward. Furthermore, increased industrialization and rising GDP, particularly in China and India, give some prospects for the worldwide HVAC motors market. Furthermore, governments all over the world are focusing on encouraging enterprises and households to employ energy-saving practices to reduce energy consumption. The worldwide HVAC motors market is driven by the fact that HVAC motors are an excellent way to save energy by enhancing machine efficiency.

The increasing demand for HVAC systems to reduce energy consumption and the introduction of various government regulations and policies for conserving energy are some of the factors that are expected to drive the global market. Additionally, the rapid industrialization and growing GDP, especially in China and India, are present various opportunities for the global HVAC motors market. Moreover, governments across the globe are focusing on reducing energy consumption in industries and households by encouraging them to use energy-saving techniques. HVAC motors offer an ideal solution for saving energy by increasing the efficiency of the machines, which drives the global market.

The global HVAC motors market is expected to grow at a high rate during the forecast period, mainly due to the stringent regulations regarding energy efficiency. Many key players have started developing motors, which are technologically advanced and provide high energy-efficiency. For instance, in 2017, ABB set a record in energy efficiency by developing a 44 MW 6-pole synchronous motor, which has an efficiency level higher than 98.9 %. Moreover, policymakers also have taken the initiative to identify opportunities for the increased use of high energy motors. In line with this, some of the policies such as minimum standards and motor labeling schemes, have already been introduced in many countries. Apart from this, many energy audit schemes and capacity development programs have been introduced to improve motor efficiencies. All these factors are expected to drive the global HVAC motors market during the forecast period. 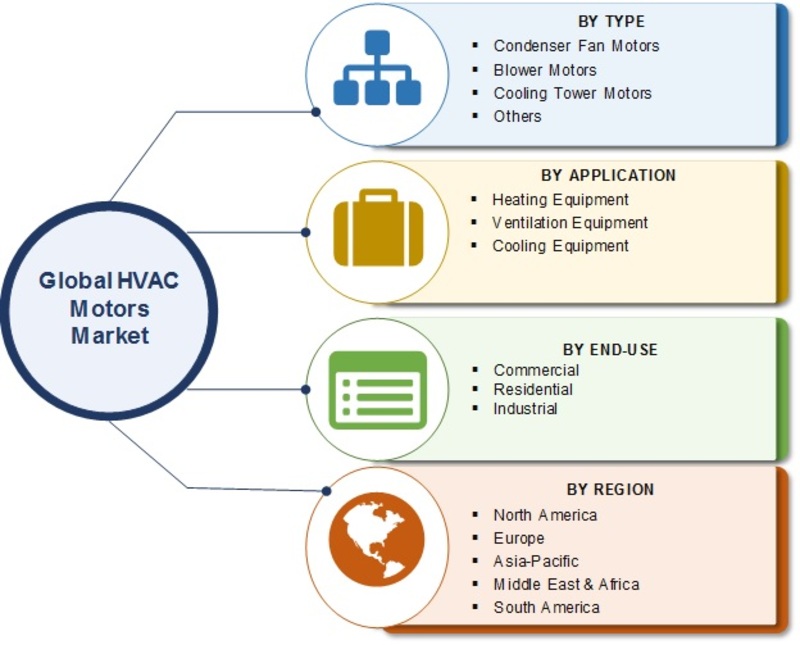 The global HVAC motors market has been segmented based on type, application, and end-use. On the basis of application, the market has been classified into heating equipment, ventilation equipment, and cooling equipment. Within the heating equipment segment, the heat pumps sub segment is likely to dominate the market, owing to their evolving capabilities including performing both, space-cooling and heating functions, along with the ability to heat water. Within the ventilation equipment segment, the air handling subsegment is expected to dominate the market, mainly due to the ambient air that these motors draw. Various other advantages of air handling units include restriction in cross contamination, simple and safer damper for regulating air, minimal space, and portability.

The global market is expected to witness a high growth rate during the forecast period, owing to the growing construction sector, across the globe. Additionally, the growth of the global market can be attributed to the growing investments in infrastructure and the utilization of energy efficient products. According to the International Energy Agency, in 2016, investments in energy efficient appliances grew by 9% and is expected to reach USD 231 billion by 2020.  China held the highest growth rate of the market at 24%. Investments in the development of energy efficient appliances and their use in end-use industries, such as oil & gas and power generation, has helped increase the growth of the global HVAC motors market.

What are the factors leading the market?

The increasing demand for HVAC systems and the introduction of various government regulations and policies for conserving energy are the factors to drive the global HVAC motors market.

The type and application are the segments.

What are the competitors of the market?

Regal Beloit Corporation (US), WEG (Brazil), Ingersoll-Rand Plc, (Ireland), Johnson Controls (US), Honeywell International Inc. (US) are the key competitors of the market.

What is the forecast of the market?

The global HVAC motors market is predicted to grow by more than 8.02% by 2030