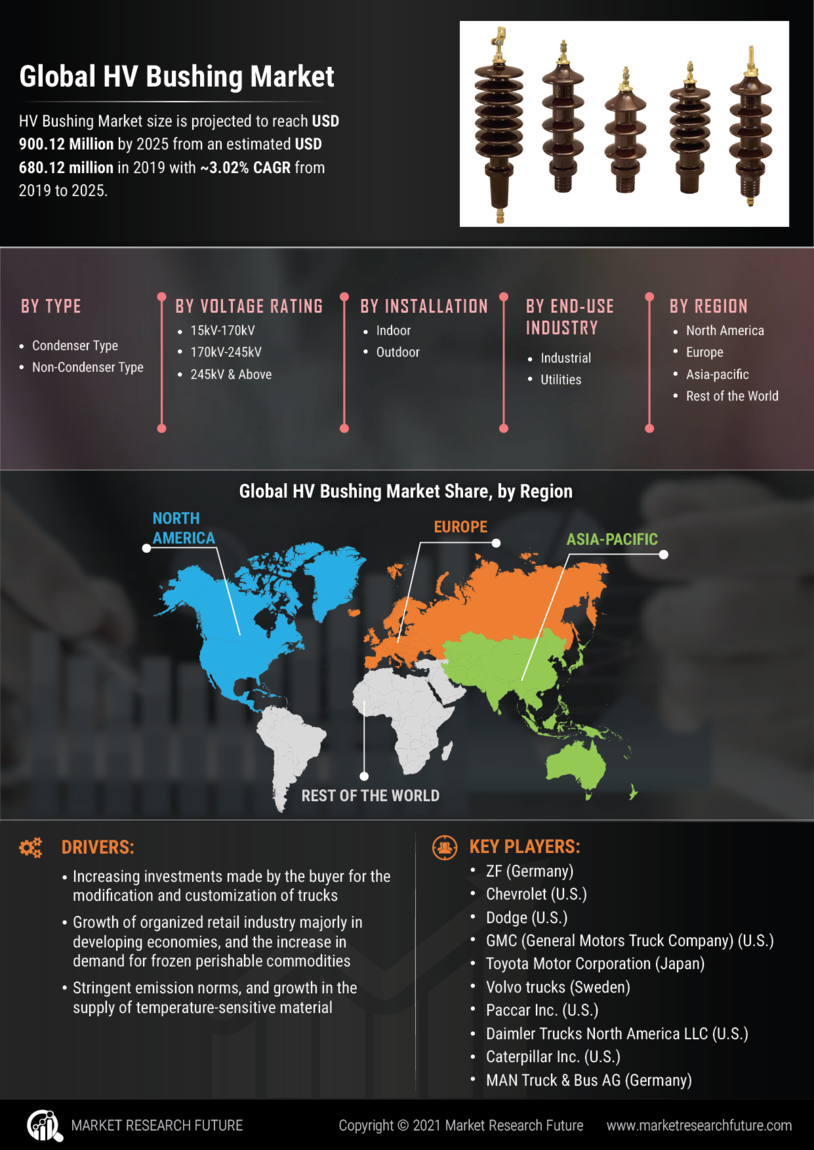 The major factors driving the growth of the global HV Bushing market include the growing demand for electrical equipment and increasing spending on electrical infrastructure. Moreover, the increasing need for reliable electric supply and subsequent investment in transmission and distribution (T&D) network is likely to drive the HV bushing market.

Additionally, according to T&D World, electric utilities are expected to invest USD 3.2 trillion globally in new and replacement of T&D infrastructure by 2026, of which HV bushing is a part. Several significant T&D projects are expected to take place in countries such as India and China, owing to the rising demand for reliable electricity while modernizing the grid. This would enhance the HV bushing as they are an integral part of T&D equipment, including transformer, switchgear, and other equipment. According to International Energy Agency (IEA), the US would need to invest USD 2.1 trillion by 2035 to modernize its grid infrastructure, including 579 GW of new generating capacity, and extensive refurbishment of the transmission network. Moreover, according to India Brand Equity Foundation (IBEF), infrastructure sector in India witnessed 91 mergers and acquisitions deals worth USD 5.4 million in 2017 and has a requirement of investment worth USD 777.73 billion in infrastructure by 2022, which would in turn increase the demand for efficient power system, driving the demand for HV Bushings and other electrical components.

Key players in the global HV Bushing market such as General Electric, Siemens, and Crompton Greaves, and others are actively focusing on signing contracts, agreements, and expansions to supply HV bushings. For instance, in 2018, ABB signed a contract worth USD 40 million to upgrade high-voltage substation in Germany including the installation of 380kV gas-insulated switchgear, of which HV bushing is an important part. This is expected to propel the growth of the HV bushing market in Europe.

The global HV bushing market has been segmented based on type, voltage rating, installation, end-use industry, and region.

Based on voltage rating, the global HV Bushing market has been segmented into 15kV–170kV, 170kV–245kV, and 245kV & above. The 245kV & above segment is expected to dominate the global market because HV bushings within this particular voltage rating are used to connect overhead lines to transformers. Moreover, these bushings are shielded with an aluminum shroud, which avoids excess electrical stress in oil at the lower end cap and terminal connections.

On the basis of end-use, the global market has been segmented into industrial, utilities, and others. The utilities segment is estimated to register a higher growth rate during the forecast period owing to the centralized T&D network managed by utilities.

On the basis of region, the HV bushing market has been segmented into Asia-Pacific, North America, Europe, the Middle East & Africa, and South America.

Asia-Pacific is expected to be the largest and the fastest-growing market, by region, during the forecast period. This is due to the rapid industrialization and urbanization in China, Japan, India, and other Southeast Asian countries. China is likely to dominate Asia-Pacific in terms of market share and growth rate.

What will be the market’s valuation by 2025?

Who are the key players active in the market?

type, voltage rating, installation, end-use industry are the segments of the market.