The High-Temperature Coatings Market Size is expected to grow USD 5.9 billion at a CAGR of 4.9% during the forecast period. High-temperature coatings are applied to materials to protect them from corrosion and oxidation. Organic or non-organic resins are used to make these coatings. They have great adhesion and are resistant to corrosion and abrasion. These coatings are used to improve the equipment's longevity and performance. They are employed in a variety of industries, including aerospace, automobile, coil, petrochemical, and others, because of these features.

In recent years, the high-temperature coatings market, as well as its applications, has shown moderate to rapid expansion, and this trend is expected to continue in the coming years. The rising application sectors of power & chemical plants, oil & gas, metal processing, cookware, stoves, and automotive industries in Asia-Pacific are driving this expansion. Epoxy coatings are commonly utilized in refineries, power generating, and secondary containment because of their great heat and chemical resistance. Silicone coatings can resist temperatures of up to 550 degrees Celsius. Because of the aforementioned considerations, the petrochemical industry's need for high-temperature coatings is predicted to rise over the forecast period. 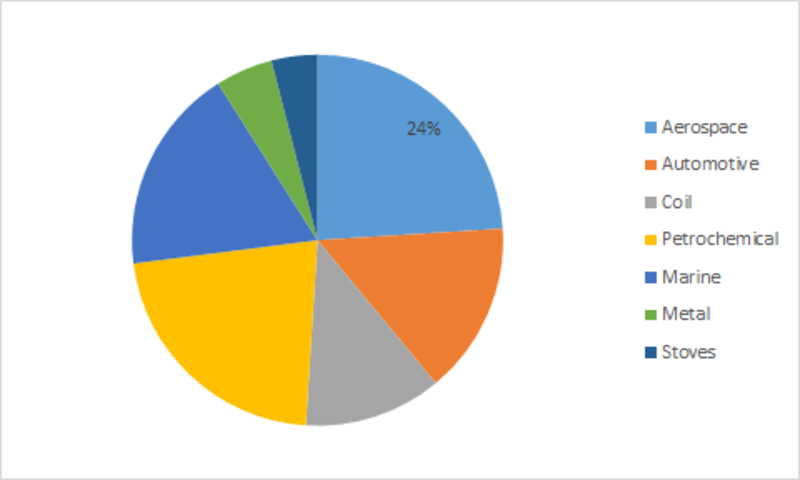 The High Temperature Coatings Market is segmented across five regions in the world namely Asia Pacific, North America, Europe, Latin America, and the Middle East & Africa. Among these, Asia Pacific holds a major share of the market due to the growing demand for high temperature resistant coatings in aerospace, automotive, coil, petrochemical, and others. The automotive segment is predicted to witness a rapid growth in the market, due to the growing consumption of acrylic, epoxy and silicone resins to produce high standard and efficient vehicles in countries such as China, Japan and India. Owing to these factors, they are the major players in the market.

The North American region is growing significantly in the market due to the increasing demand for acrylic and epoxy resins in construction and buildings and automobile sectors. It is predicted that the rising awareness and regulations proposed by the government is set to drive the powder technology segment to lead the market during the forecast period. The growing demand of protection coatings in aerospace, electronics industries has propelled the countries such as the U.S., Canada and Mexico to achieve a stunning growth in the market.

The Latin American region is estimated to witness a recognized development in the market due to growing consumption of silicon resins and acrylic resins in chemical, construction & buildings, and energy sectors. Moreover, the Middle East & Africa is anticipated to witness a higher growth in the market due to increasing demand for high temperature coatings in oil & gas, petrochemical, energy and aviation sectors.

The Global High Temperature Coatings Market is segmented into resin type, technology and end-use. On the basis of resin type, the market is further categorized into epoxy, silicone, polyester, acrylic, alkyd, and others. Among these, the acrylic resin segment holds a majority of the market share due to its extraordinary features offered by the product such as biocompatible, antioxidant, and corrosion resistance. The silicone segment is projected to witness a rapid growth due to its growing consumption in heavy end industries. The market by technology is further categorized into water, solvent and powder segments. Among these, the powder segment is accounted for major share in the market due to its growing use as a biocompatible and feasible product. The strict and government regulations implemented by the regional governments has prompted manufacturers and investors to shift their focus from chemical coatings to powder based products. The water segment is estimated to witness a rapid growth in the market due to its extensive use in paints and coating industry. Aerospace, automotive, coil, petrochemical, marine, metal, and stoves and others are segregated on the basis of end-use segment. Additionally, it is predicted that the automotive segment is set to witness a higher CAGR during the forecast period.

What are high temperature coatings and what are major factors driving their applications?

What are the major growth drivers of the global high temperature coatings market?

Increasing demand for acrylic & epoxy resins from the construction and automobile sectors.

Which region holds the largest share in the high temperature coatings market?

What are the key growth strategies of high temperature coatings industry players?

Strategic initiatives such as mergers & acquisitions, collaborations, expansion, and technology/ product launch are some of the growth strategies that players operating in the global High temperature coatings market adopt to gain a larger competitive advantage.

Who are the top players in the global high temperature coatings market?

The Sherwin-Williams Company (US), AkzoNobel N.V. (the Netherlands), PPG Industries Inc. (US), Axalta Coating Systems (US), The Valspar Corporation (US), Jotun (Norway), Carboline (US), Aremco (US), Hempel (Denmark), and Belzona International Ltd. (UK), are some of the leading players in the global high temperature coatings market.