The Hexamethylenediamine Market was valued at USD 5.98 Billion in 2018 and is projected to register a 5.30% CAGR during the forecast period.

Hexamethylenediamine, also known as HMDA, is a colorless crystalline solid with a characteristic amine odor. HMDA consists of a hexamethylene hydrocarbon chain terminated with amine functional group. It can be used as a chemical intermediate, corrosion inhibitor, and a curing agent. Thus, it has extensive applications in various end-use industries such as water treatment, textile, and automotive. Additionally, it is also used in manufacturing resins that can be used in adhesives and paints.

The increasing demand for hexamethylenediamine in the automotive and textile industries is collectively driving the global market. This is primarily attributed to the rising demand for hexamethylenediamine as a precursor in the production of nylon 6, 6, which is used to produce technical and domestic textiles. For instance, nylon 6, 6 is used in automobiles to manufacture airbags, electro-insulating elements, and radiator end tanks. Additionally, owing to the rising environmental concerns there is an increased need to produce bio-based hexamethylenediamine. This is likely to create lucrative opportunities for players operating in the global market.

However, HMDA is moderately toxic and direct exposure to the product during its manufacturing can result in eye damage and skin burns. Moreover, it has been included in the hazardous substance list by the American Conference of Governmental Industrial Hygienists (ACGIH) and the European Chemicals Agency (ECHA). This restraint is likely to hamper the hexamethylenediamine market worldwide. 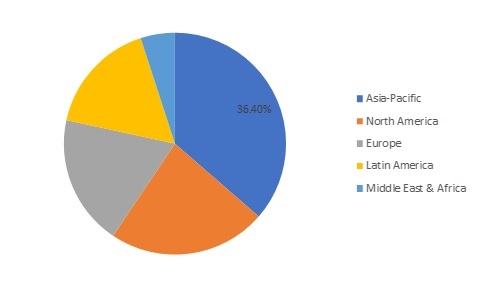 The market in Asia-Pacific dominates the global hexamethylenediamine market and is projected to register the highest CAGR during the forecast period owing to the rapid industrialization in the region. The increased use of hexamethylenediamine as a precursor to producing nylon 6, 6 in end-use industries, such as automotive and textile, is expected to drive the regional market demand. China is the largest consumer in the region on account of rising exports of nylon from the country. For instance, in 2018, the total nylon exports from China were valued at ~USD 137.70 million. Thus, making it among the top three global nylon exporters. Furthermore, India and other South-East Asian countries are propelling the regional market growth on account of the increasing use of the product in the water treatment industry. These factors create numerous opportunities for the players operating in the hexamethylenediamine market in the region.

The market in North America accounted for a substantial market share in 2018. The growing demand for hexamethylenediamine as a raw material in the paints and coating industry and the increasing constructional activities in the region are driving the growth of the regional market. In addition, the rising advancements in the US, coupled with emerging multifunctional applications such as in 3D printing and functional coatings, are further driving the regional market growth.

The market in Europe is expected to showcase significant growth during the forecast period. This can be attributed to the increasing use of hexamethylenediamine to manufacture automotive components and produce lubricants. Germany is the leading country in the region, followed by France and the UK, owing to the presence of major key players such as BASF SE, LANXESS, Merck KGaA, and Evonik Industries AG.

The markets in Latin America and the Middle East & Africa are expected to show healthy growth during the forecast period owing to the growing paints and coatings industry. The increasing use of HMDA in the petrochemical industry is further fueling regional market growth.

Based on application, the global market is classified into nylon synthesis, lubricants, coating, adhesives, and others

Based on end-use industry, the market has been segmented into textile, paints & coatings, automotive, water treatment, petrochemical, and others

By region, the market has been categorized into North America, Europe, Asia-Pacific, Latin America, and the Middle East & Africa.

February 25, 2020 -Invista, a fiber, resin, and intermediates company in the US, announced that it is still progressing with its USD 1.2 BN adiponitrile (ADN) project in China, amid the coronavirus outbreak that is causing disruption & creating the risk of an economic slowdown. The 400,000t/yr ADN plant in Shanghai's chemical park had secured an environmental & safety approvals from authorities in January.

At what CAGR is the Hexamethylenediamine Market predicted to grow during the forecast period?

Hexamethylenediamine Market is predicted to grow at 5.30 % through forecast period of 2020-2030.

What is the forecast period of Hexamethylenediamine Market research report?

The forecast period for Hexamethylenediamine Market research report is 2020-2030.

Which region will lead the Hexamethylenediamine Market?

Who are the key players in the Hexamethylenediamine Market?