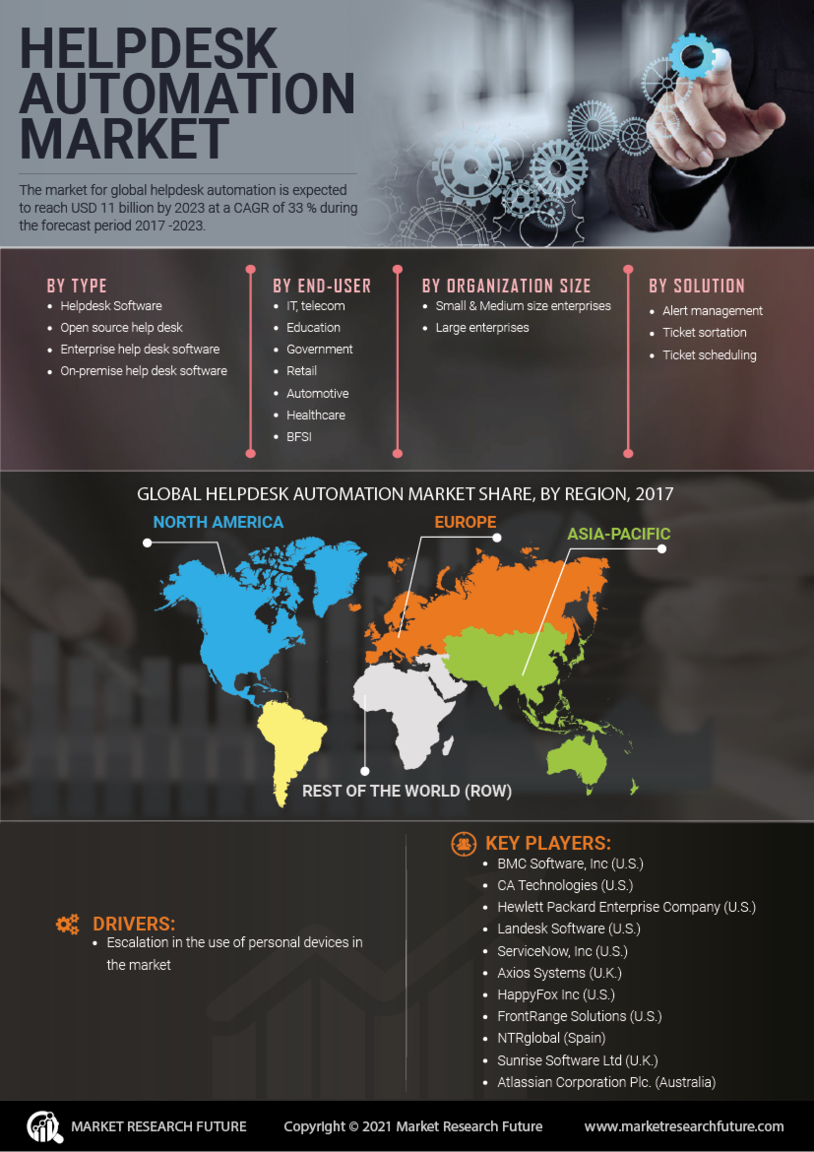 Helpdesk Automation Market is Expected to be worth USD 26.2 billion with CAGR of 32.10% by 2030.
Request a Free Sample

Helpdesk automation automates those tasks that are either mundane and/or menial and must be performed repeatedly. This desk helps resolve simple and more complex technical issues that customers may have regarding a particular product or service. Because of their cost and complexity, they tend to be used more by large than by small or even medium-sized organizations.

COVID-19 soon proved that it was more than a nuisance virus when it became a major global issue last year. Many people caught this virus, thus causing the global pandemic. The effects of the virus were not consistent or uniform, though. Most recovered with little problem. However, a small percentage had to be hospitalized, and a few people died because of it.

Governments responded by imposing lockdowns and quarantines to try to contain the spread of the virus. This had limited success. However, it did encourage more people to work, shop, and do business remotely. It also leads to breakneck growth in the global helpdesk automation market. The CAGR in this market is expected to be very high long after the pandemic has completely disappeared.

More and more people and organizations are either using or are going to use personal digital devices like iPhones and iPads. This is a key factor that’s driving exponential growth in the helpdesk automation market.

One key challenge that the global helpdesk automation market faces lies in the fact that the manufacturers must continue to develop newer devices that are more efficient and effective in terms of resolving customer technical inquiries while keeping a lower price point for smaller businesses.

The fact that more individuals and companies are using devices that rely on helpdesk automation technologies is motivating many companies to invest heavily in research and development to come up with a new generation of technologies that are more efficient and offer the end consumer more options while keeping costs down.

Landesk Software is a major American player in the global helpdesk automation market. It has managed to maintain a superior position in the market by investing heavily in research and development. This has allowed it to come up with innovative products with more useful capabilities. One such product is the neurons for healing. These are bots that are designed to diagnose and treat complex medical problems.

The global helpdesk automation market can be divided into the following segments based on software:

Software is vital in terms of automating helpdesks because it’s the software that powers these helpdesks the most. These software programs follow patterns that dictate and determine how customer tickets are to be sorted, assigned, and managed. The software programs also regulate reminding the helpdesk staff if they’ve successfully resolved key ticket issues on time.

Web helpdesk software is the most important software program largely because it uses the Internet to operate.

The market can be divided into the following segments based on the solution:

These solutions are designed to help helpdesk staff resolve ticket queries as soon as possible and as effectively as possible so that they can resolve as many tickets as possible in as little time as possible.

The automation helpdesk gives the staff tickets and the amount of time that they have to resolve the issues. It then lets the staff know when new tickets with new issues have been raised.

The end-users in the global helpdesk automation market tend to be:

It’s the end-user segment that uses helpdesk automation technologies the most. They also have the widest range of uses for these technologies.

The government, retail, and healthcare sectors are witnessing growing demand for helpdesk automation technologies largely because they have to put a lot of information on their websites regarding their policies and procedures, products, and services for their customers to read. Customers are very savvy and want as much information as possible. This allows them to make well-informed strategic decisions in terms of deciding which products and/or services to purchase.

This is especially true in the Asia-Pacific region and in the developing nations of Eastern and Central Europe. There, governments are trying to automate many of their basic and routine/repetitive processes by gravitating towards using digital platforms.

The global helpdesk automation market is divided into the following sectors based on organization size:


Large enterprises have lots of customer tickets that come in that need basic technologies to process. They also need basic information and knowledge to process. These are known as level one technologies. These can easily be automated. They are leading the pack in terms of using helpdesk automation technologies largely because of this issue. However, the fact that they have the money and infrastructure that can support this is also equally important.

The global helpdesk automation market is separated into the following regions:


North America has the largest market share. There are many reasons for this. One is that it has the superior IT infrastructure to support this. The other is that it is home to some of the largest and most sophisticated companies in the world. Another factor is that many large helpdesk automation companies are already in North America. It was also the first region in the world to adopt cloud technology. This is crucial in terms of supporting helpdesk automation.

The Asia-Pacific region is home to India and China. These nations are developing rapidly. This is fueling the growth of a rapidly growing middle class that wants to buy things. This is leading to a high regional CAGR in the helpdesk automation market. This is further reinforced by the fact that internet penetration is growing rapidly in these two nations.

The global helpdesk automation market is highly competitive. The reason being that there are many companies that are already in the market and many more that want to enter. These companies are finding that they must invest heavily in research and development to survive. This allows them to come up with newer products that have more features and uses and are more innovative. They can then outsell their competitors.

Companies are also finding that they must enter into joint ventures and/or merge with/acquire other companies in order to survive. The new resources that they get from this activity allow them to enter into new markets on a strong footing. They can also easily solidify their positions in existing markets. Either way, it allows them to create the sustainable competitive advantage that they need to survive.

The global helpdesk automation market is growing at a CAGR of 33% a year. This is expected to continue until 2023. The market is expected to be worth USD 11 million by then. North America has the largest market share, but the Asia-Pacific region has the highest CAGR of all of the regions in the world.

What are the factors that are instrumental in improving the helpdesk automation market expansion?

The escalation in the use of personal devices in the market is expected to motivate the market in the coming years.

Who are the players that are emerging as instrumental to the helpdesk automation market’s long term growth?

What is the CAGR scope of the helpdesk automation market in the forthcoming period?

A 32.10% CAGR is expected from the market in the coming period.

What is the prospective earning level of the helpdesk automation market in the coming period?

A USD 26.2 billion is forecasted for the market in the coming years.

Which segments are studied to gain a thorough knowledge of the helpdesk automation market?

Solution, software type, end-users, and organization size are estimated to form a better comprehension of the market.