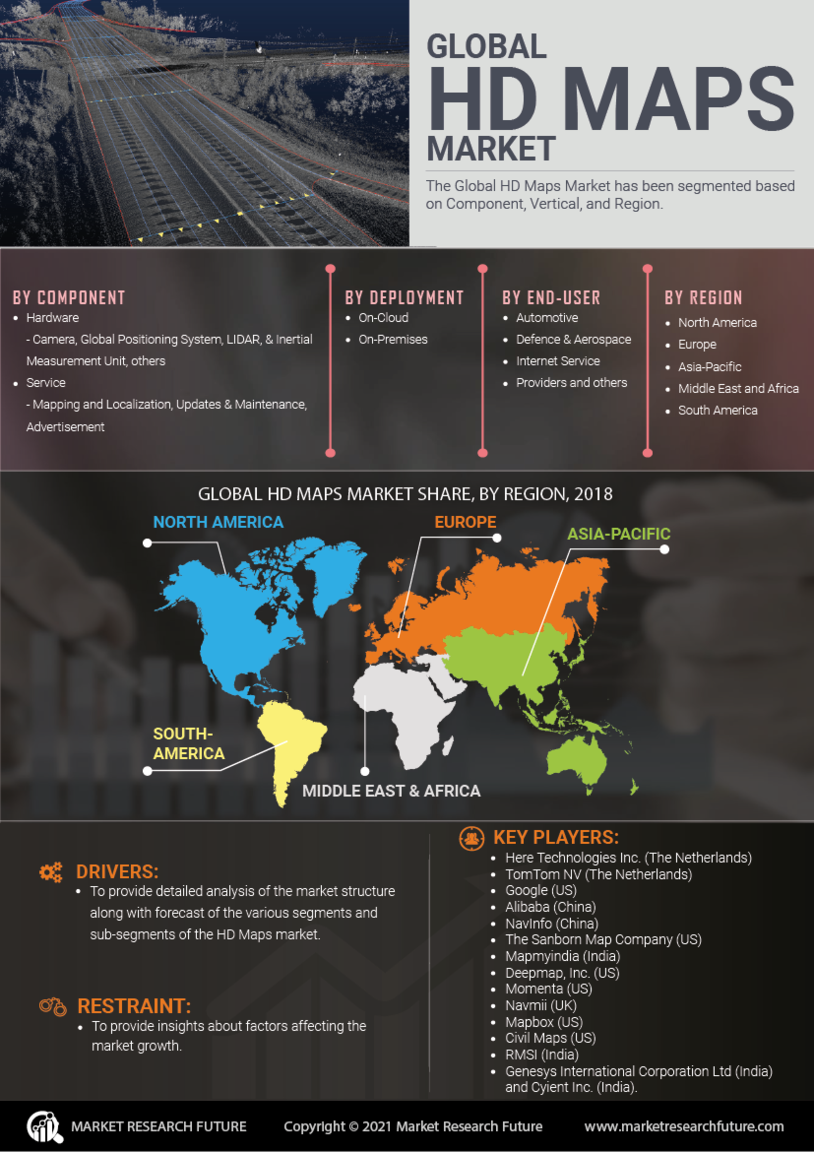 HD Maps Market Overview:According to the reports, during the projected period, the global HD maps market size is expected to grow at a significant rate. High definition maps, often known as HD maps, offer very high accuracy down to the centimeter level and thus are designed especially for self-driving vehicles and other applications. HD maps, among many other things, have been used in GPS systems, cellphones, and driverless cars to get accurate information and guidance about how to move about in three-dimensional space, among some other things. An HD map is generally comprised of five levels, which are as follows: an actual layer, a map previous layer, a semantics map layer, a geometrical map layer, as well as a topographic maps layer. The real-time layer is the first of these layers.

Major drivers supporting the expansion of the HD maps market include expansion typically by start-ups into the creation of HD maps due to the increasing trend toward driverless cars, as well as rising consumer demand for HD maps. As a result, high-definition maps assist drivers and driverless cars in visualizing paths and making important decisions, which results in improved traffic safety, which has driven the use of high-definition maps for driverless cars. Nevertheless, the security and ethical concerns associated with high-definition maps, as well as the expensive cost of implementation, are the most significant obstacles encountered by market suppliers, as well as a lack of uniformity in HD maps is limiting the industry's expansion. The industry is on the lookout for possibilities presented by advances in 5G networks.

HD Maps Market Covid 19 Analysis:The COVID-19 epidemic has halted manufacturing, slashed sales, and forced major companies in the global automobile industry to alter or abandon their plans. Rescheduled product and program launches, retail presence stabilization, cash management, and inventory evaluation have all had an influence on the yield and revenues of commercial and passenger vehicles worldwide. The research, development, and implementation of driverless driving, as well as the expansion of the HD maps market sales, are also anticipated to slow. Owing to the spread of COVID-19, the majority of nations enforced full shutdowns for even more than 2 months, affecting vehicle manufacturing. Globally, manufacturing facilities were closed, and car sales were severely impacted.

Restraints:Security and ethical concerns about high-definition maps, as well as the high cost of implementation, are the primary difficulties confronting industry suppliers, and a lack of standardization in high-definition maps is impeding market development.

Challenges:The availability of self-drive or leased driving vehicle options in many remote rural areas of emerging nations such as India, Brazil, and China is limited. Furthermore, owing to a lack of adequate internet access in rural regions, HD maps are unable to identify the location, road quality, and traffic status. Efforts are being made by governments and corporations to offer free internet access in certain regions. This is the major challenge for the market players of the HD map market. As a result, it is anticipated that the HD map market would see consistent development in rural regions during the projected period.

Cumulative Growth Analysis:When it comes to the fundamental chain of mobility services, higher-resolution HD maps are important. Additionally, growing public awareness of sophisticated technology, as well as a growing reliance on the web, are propelling this industry. High definition relates to precision in advanced tech, which leads to precise findings in the field of medicine. A high-definition map is utilized for precise navigation, and it assists the driver in reaching the desired destination. High-definition mapping is at the heart of the next generation of autonomous vehicles. The sensors that detect the presence of a vehicle include LIDAR, Radar, and visual cameras. The need for high-definition map applications is increasing substantially as a result of the increasing popularity of hire cars such as Ola and Uber.

HD Maps Market Segmentation Overview:The market is segmented on the basis of component, vertical, and region. The global HD Maps Market trend is expected to witness decent growth during the forecast period.

By Application:Based on the application, the market is segmented into hardware, service, and software. There are many types of hardware in this category, including a camera, LIDAR, global positioning system, an inertial measurement unit, as well as other devices. Additionally, the service sector has been divided into three subcategories: mapping and localization, maintenance. updates, and advertising.

By end-users:Based on the propulsion types, the market is segmented into automotive, military & aerospace, internet service providers, and other segments.

HD Maps Market Regional Analysis:According to the reports, the market is bifurcated based on region into four categories: North America, Europe, Asia-Pacific, and the rest of the world North America presently leads the worldwide HD maps business and accounts for a substantial portion of total market revenue. Owing to the inclusion of significant important companies in the market that have invested substantially in development and research initiatives to create HD maps that are able to provide adequate centimeter-level accuracy, the industry has seen a surge in growth. The area is also a pioneer in technology acceptance, boasts a highly trained workforce, and has seen an increase in the use of new technologies such as artificial intelligence and 5G. A significant portion of the industry is anticipated to be dominated by Europe as well. The development of 5G technology, as well as an increased emphasis on partnerships and alliances between vehicle manufacturers with HD map producers, are the drivers that are propelling the HD map market share development in the area.

Competitive Landscape:Several of the participants have huge supply agreements with major manufacturers and driverless car technology companies. To gain momentum in the high-definition map for the driverless vehicles market, these firms have used tactics such as product innovation, mergers, partnerships, affiliations, acquisitions, joint projects, collaborations, and contractual arrangements. Among large companies, partnership and cooperation are the most frequently used methods for achieving their objectives.

Recent Developments:May 2019, AutoNavi, an Alibaba-backed online mapping cable operator, started charging its car partners for the use of its elevated  or HD map, which really is essential for self-driving options. When it comes to licensing HD maps, the business charges RMB 100 (USD 15) per vehicle each year, which captures the surrounding area with centimeter-level precision as opposed to conventional online map apps, which record the nearby region with meter-level precision.

What is the predicted value of the global high definition maps market?

The global high definition maps market is predicted to hold a substantial value during the forecast period.

At what CAGR is the global high definition maps market is likely to flourish?

The global high definition maps is estimated to flourish at a decent CAGR during the forecast period.

Which region is likely to dominate the global high definition market?

According to the study, North America is projected to dominate the market. On the other hand, the APAC region is estimated to be the fastest-growing market.

On what basis is the global high definition maps market segmented?

The global high definition maps market can be segmented on the basis of component, deployment, end—user, and region.

What are the renowned names of the global high definition maps market?