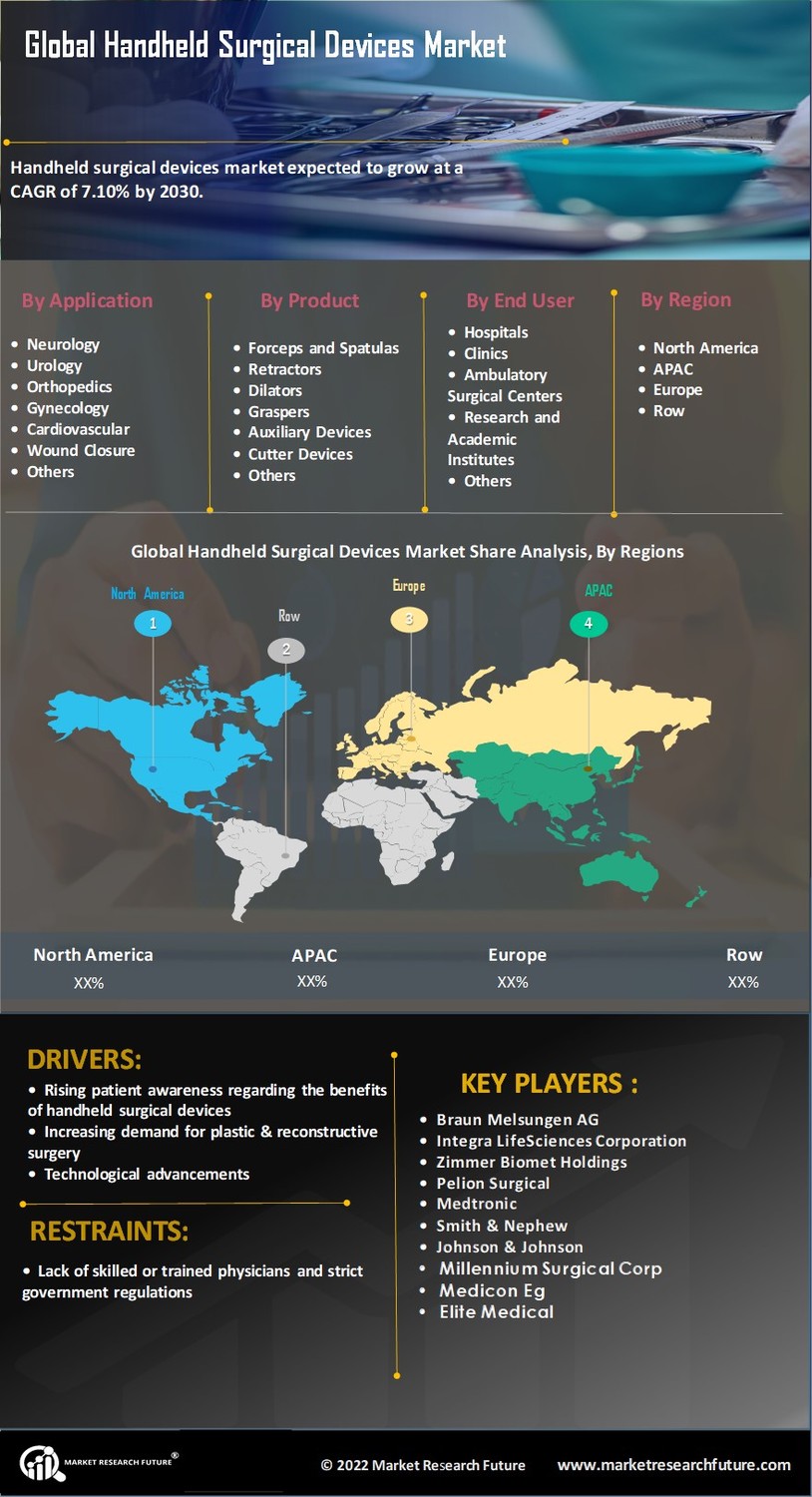 The Handheld, surgical devices market is supposed to develop fundamentally over the gauge period. It is projected to reach USD 5025.99 Million develop at a CAGR of 7.1% over 2022-2030.

Interest in surgeries is rising as medical procedures have become standard therapy for different ailments. It is seen that the rising number of surgeries is the key variable driving the handheld careful gadgets market. As indicated by the 2016 information proposed by Eurostat, around 1040.8 instances of waterfall medical procedures and 406.2 cases of transluminal coronary angioplasty are enrolled in Germany.

Different factors like expanding mishaps, high geriatric populace, innovative headways, growing interest in plastic and reconstructive medical procedure, and rising patient mindfulness with respect to the advantages of careful handheld gadgets are also expected to push the development of the market.

Nonetheless, the absence of talented or prepared doctors and severe unofficial laws can hamper the market development over the estimated time frame.

The global handheld surgical devices market is segmented based on application, product, end user and region.

The global market for handheld surgical devices, by application is segmented into neurology, urology, orthopedics, gynecology, cardiovascular, wound closure, and others.

The market, by product, is segmented into forceps and spatulas, retractors, dilators, graspers, auxiliary devices, cutter devices, and others. The auxiliary devices segment is further classified as clamps, cannulas, and closure devices. The cutter devices segment is further classified as trocars, lancets, and scissor. The others segment includes punches, curettes, blunt dissectors, and snares.

Based on end user, the market is segmented into hospitals, clinics, ambulatory surgical centres, research and academic institutes, and others. Clinics held a lucrative market share in 2017 due to rising prevalence of chronic conditions.

In the current scope of the study, the above-mentioned segments are covered into the four global regions, namely the Americas, Europe, Asia-Pacific and the Middle East & African region.

The handheld surgical devices market in the Americas has further been segmented into North America and South America, with the North American market divided into the US and Canada.

The Americas dominated the global market for handheld surgical devices owing to the increasing diagnosis of chronic conditions, and high geriatric population. According to the 2016 data suggested by the Centers for Disease Control and Prevention (CDC), around 28.1 million adults were diagnosed with heart disease in the United States.

In 2017, it was estimated that Europe stood second in the global handheld surgical devices market. This can be attributed to the increasing cases of surgical procedures, and rising research and development investments.

Asia Pacific was projected to be the fastest growing region in 2017. Factors such as growing healthcare sector, increasing penetration of the market players within the region, increasing healthcare expenditure, a rising number of surgical procedures drive the regional markets of the Asia Pacific region. According to the Australian Institute of Health and Welfare, during 2015–16, there were 10.6 million hospitalisations, and 1 in 4 hospitalisations involved a surgical procedure.

On the other hand, the Middle East and Africa held least share in the global handheld surgical devices market due to the low per capita income, especially within the African region.

Market Research Future research is conducted by industry experts who offer insights into industry structure, market segmentation, assessment, Competitive Landscape (CL), penetration, as well as on emerging trends. Besides primary interviews (~ 80%) and secondary research (~ 20%), their analysis is based on their years of professional expertise in respective industries. Our analysts also predict where the market will be headed in the next five to ten years, by analysing historical trends and current market positions. Furthermore, the varying trends of segments and categories geographically presented are studied and are estimated based on the primary and secondary research.


Extensive primary research was conducted to gain a deeper insight of the market and the industry performance. In this particular report we have conducted primary surveys (interviews) with key level executives (VPs, CEOs, Marketing Directors, Business Development Managers, and many more) of major players who are active in the market. In addition to analyzing the current and historical trends, our analysts predict where the handheld surgical devices market is headed, over the next five to ten years.


Secondary research was mainly used to collect and identify information useful for extensive, technical, market-oriented, and commercial study of the handheld surgical devices. It was also used to obtain key information about major players, market classification, and segmentation according to industry trends, geographical markets, and developments related to the market and perspectives. For this study, analysts have gathered information from various credible sources, such as annual reports, SEC filings, journals, white papers, corporate presentations, company web sites, international organization of chemical manufacturers, some paid databases, and many others.Recent Development

Through its auxiliary Ethicon Inc, Johnson and Johnson procured Auris Health, Inc. for roughly $3.4 billion in real money. An extra $2.5 billion will be paid on arriving at specific foreordained achievements. Johnson and Johnson utilize Auris Health's automated stage innovation across numerous careful claims to fame, including a cellular breakdown in the lungs.

What are the product name included in the Handheld Surgical Devices Market?

The product name included in the Handheld Surgical Devices Market are Auxiliary Devices, Cutter Devices, Dilators, Forceps and Spatulas, & Others.

At what CAGR is the global handheld surgical devices market projected to grow in the forecast period (2022-2030)?

The global handheld surgical devices market is projected to grow at approximately 7.10% CAGR during forecast period (2022-2030).

What are the major tailwinds pushing the growth of the global handheld surgical devices market?

Increase in the cosmetic surgeries performed each year.

Which region holds the largest share in the global handheld surgical devices market?

Who are the top players in the global handheld surgical devices market?

How does the outlook of the global handheld surgical devices market look like?