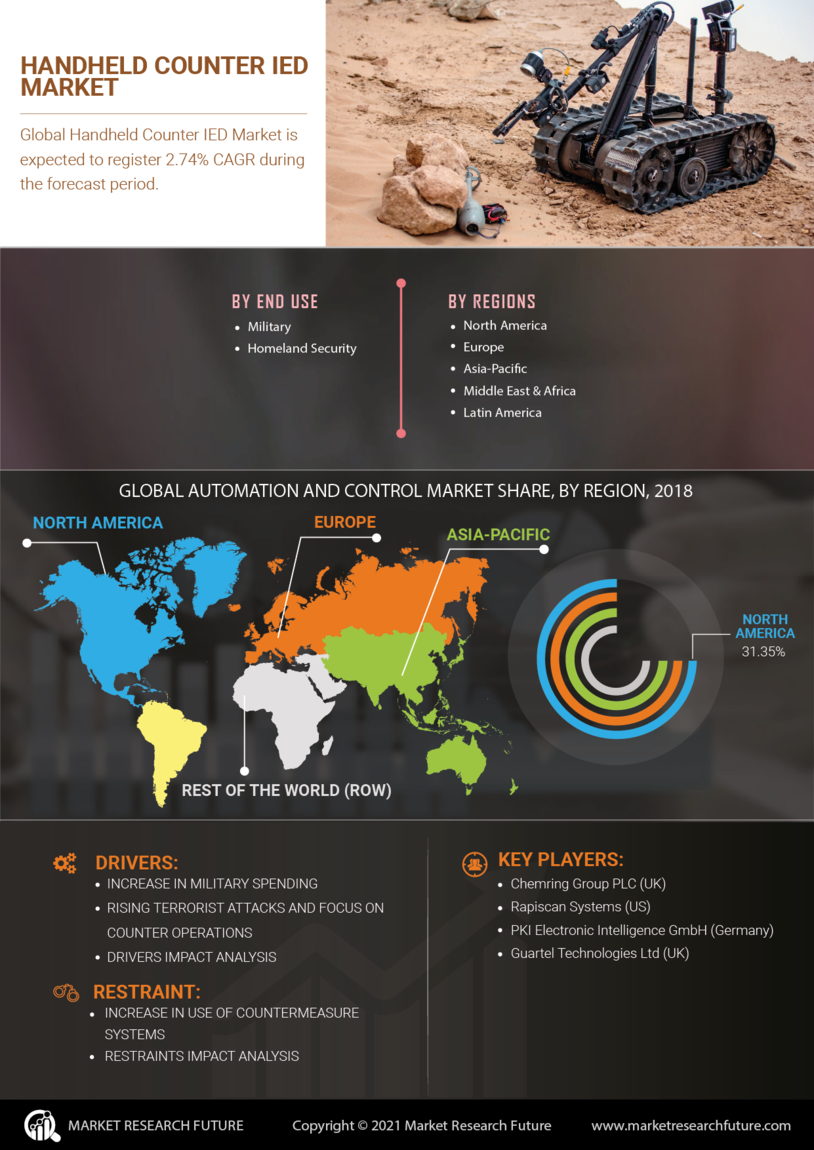 Handheld counter improvised explosive devices (IEDs) are systems used primarily by military and law enforcement agencies for detection and countermeasures. These devices are carried in the hand of the user and mainly include technologies such as ground-penetrating radar.

The global market of handheld counter IED is growing rapidly. The growth is driven by an increase in military spending and rising terrorist attacks and focus on counter operations. However, the growth of the market can be hindered by the increase in the use of countermeasure systems.

The incidences of counter IED blast have been increasing from the last few years across the globe. According to the National Bomb Data Centre (NBDC), India had the maximum number of bomb blasts in the world in the past two years, with 337 IED blasts in 2017, followed by Iraq and Pakistan. Iraq witnessed 221 IED blast incidents, and Pakistan witnessed 161. Likewise, about 132 IED blasts took place in Afghanistan, 92 in Turkey, 71 in Thailand, 63 in Somalia, and 56 in Syria. Owing to the increasing incidences of IED blasts, military organizations globally are focusing on counter operations. Defense agencies around the world are focused on developing and procuring advanced soldier systems, such as handheld counter IED.

The Global Handheld Counter IED Market has been segmented based on end use and region. By end use, segments of the market are military and homeland security. Based on region, the market has been divided into North America, Europe, Asia-Pacific, the Middle East & Africa, and Latin America.

The homeland security segment is expected to grow at the highest CAGR during the forecast period.

Homeland security is involved in keeping the homeland safe, secure, and resilient against terrorism and other hazards, such as riots and natural disasters. It also reduces the vulnerability of the country to terrorism and minimizes the damage from attacks that do occur. Terrorism is one of the most dangerous threats, and the incidents of IED attacks by the terrorist across the world is increasing over the past few years. As a result, the demand for handheld counter IED equipment is increasing by the homeland security agencies. Therefore, the homeland security segment of the global handheld counter IED market is projected to register a CAGR of 2.29% during the forecast period.

North America accounted for the largest market share in 2019. It is expected to be the largest market for handheld counter IEDs during the forecast period. Asia-Pacific is expected to register the highest CAGR during the forecast period owing to the increasing demand for handheld counter IEDs by the military forces and homeland security agencies due to increasing territorial disputes. There have been a high number of conflicts around the India-Pakistan border, the India-China border, the Himalayas, the Indian Ocean, and the South China Sea. It has resulted in the deployment of IED systems in these countries to counter the rise in cross-border activities. Hence, Asia-Pacific countries are focusing on acquiring handheld counter IED systems to boost combat capabilities.

What CAGR is the market expected to procure during the review period?

The market is expected to procure a CAGR of 2.74% during the review period.

What are the some of the top growth boosters in the global market?

The handheld counter IED market’s growth has been the result of the rise in military expenditure along with the surge in terrorist attacks as well as the mounting number of counter operations.

What factor can act as a market barrier in the near future?

The rising deployment of countermeasure systems can act as a market barrier in the near future.

Who are the key market end-users outlined in the report?

The key market end-users outlined in the report include military and homeland security.

Which region has emerged as the most profitable market?

North America has emerged as the most profitable market.

The mounting demand for handheld counter IEDs in the military sector as well as homeland security agencies in light of the growing territorial disputes has boosted the market growth in Asia Pacific.