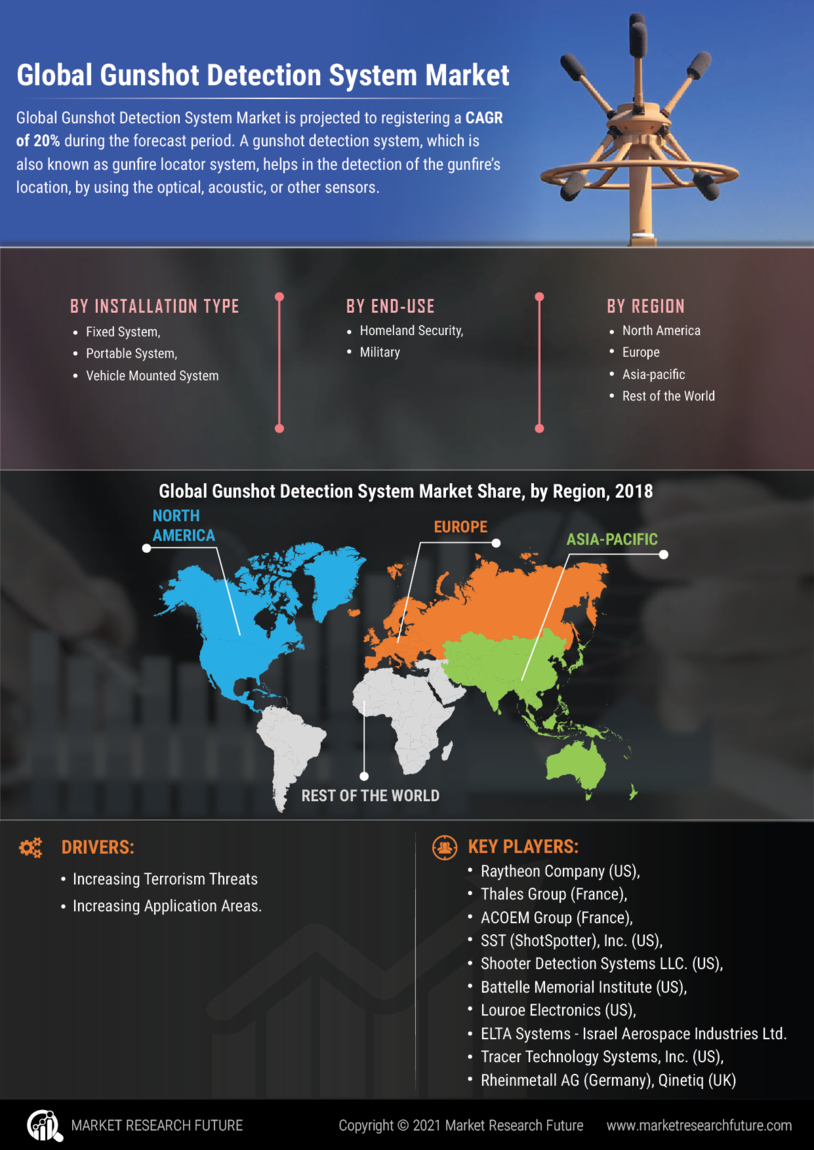 A gunshot detection system, which is also known as gunfire locator system, helps in the detection of the gunfire’s location, by using the optical, acoustic, or other sensors. These systems are primarily used by the law enforcement officials and the military personnel in order to identify the source and the direction of the type of weapon fired. These systems help in improving the situational awareness of the soldiers and the law enforcement personnel. The primary factor that boosts the gunshot detection system market is the growing gunfire incidents in the public places such as metro/railway stations, schools, hospitals, etc. Concurrently, as a result of the rapidly increasing terrorism threats, across the globe, along with other insurgent activities in the public places, the law enforcement officials, homeland security personnel, and the military forces are adopting the gunshot detection technologies so as to mitigate the casualties, during such incidents. In addition, the military authorities of some countries are installing the gunshot detection systems in their national borders, as a result of the increasing cross border firing. This factor also fuels the market growth. Over the years, there has been a significant increase in the global military expenses, which also fuels the market growth. According to the Stockholm International Peace Research Institute (SIPRI), the global military spending rose by 1.1% in 2017, accounting for approximately USD 1.74 trillion. In the same year, countries such as China, Saudi Arabia, and India increased their military spending by 5.6%, 9.2%, and 5.5%, respectively. Furthermore, India overtook the UK, to become the fifth largest defense spender in the world. Meanwhile, other countries have plans to invest in advanced technologies and are focusing on expanding, modernizing, and enhancing the operational capabilities of their armed forces. The global gunshot detection system market has been segmented by installation type, product type, end-user, and region. Based on installation type, the gunshot detection system market is divided into fixed systems, portable systems, and vehicle mounted systems. In 2017, the fixed system segment accounted for the largest market share, and it is expected that the portable system segment would witness the fastest market growth, during the forecast period. Based on product type, the market is divided into indoor and outdoor. In 2017, the outdoor segment accounted for the largest market share and it is also expected to witness the fastest market growth, during the forecast period. Based on end-user, the market is divided into homeland security personnel and military forces. In 2017, the military segment accounted for the largest market share and it is expected that the homeland security segment would witness the fastest market growth, during the forecast period. The global market has also been segmented into five regions, namely, North America, Europe, Asia-Pacific, Middle East & Africa, and Latin America. North America had the largest share of the market in 2017, which was significantly due to the large production and sales of firearms and the growth in gunfire incidents in the US, in particular. According to the ShotSpotter National Gunfire Index, there were approximately 87,000 gunfire incidents in 2017, across 87 cities, in the US, particularly. Concurrently, there has been a large sale of firearms over the last 2 years in the country. Due to such factors, the government is putting emphasis on the deployment of gunshot detection systems. Similarly, Asia-Pacific is expected to be fastest growing market for the gunshot detection systems, during the forecast period. This is primarily due to the rising terror attacks, political disputes, and cross-border conflicts across the region. Therefore, the global market is estimated to register a CAGR of over 20% during the forecast period of 2018 to 2023. 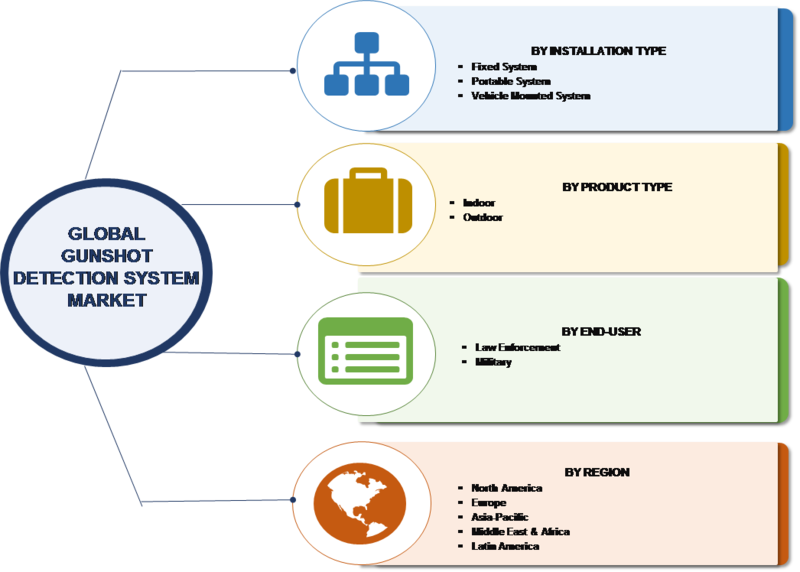 The report on global gunshot detection system Industry by Market Research Future covers extensive primary research. This is accompanied by a detailed analysis of the qualitative and quantitative aspects by various industry experts and key opinion leaders to gain deeper insights into the market and industry performance. The report offers a clear picture of the current market scenario, which includes the historical and forecast market size, in terms of value, and the technological, macroeconomic, and governing factors of the market. The report also provides comprehensive information about the strategies of the top companies in the industry, along with a broad study of the different market segments and regions.

What factors are estimated to advance the global gunshot detection system market in the coming period?

The ease of accessibility to firearms is assessed to spur the market in the near future.

What CAGR is estimated to be evident in the gunshot detection system market?

A 20% CAGR is foreseen to reinforce the market in the impending period.

What are the firms in the gunshot detection system market estimated to empower development in the coming period?

Which region is predicted to be at the vanguard for gunshot detection system market’s expansion in the forecast period?

The region of North America leads the charge for the market.

Which segment in the gunshot detection system market is estimated to show prolific growth in the forecast period?

The military segment is estimated to empower the global market progress in the period of the forecast.

The Global Gunshot Detection System Market Is Estimated To Register A Cagr Of Around 20% During T...