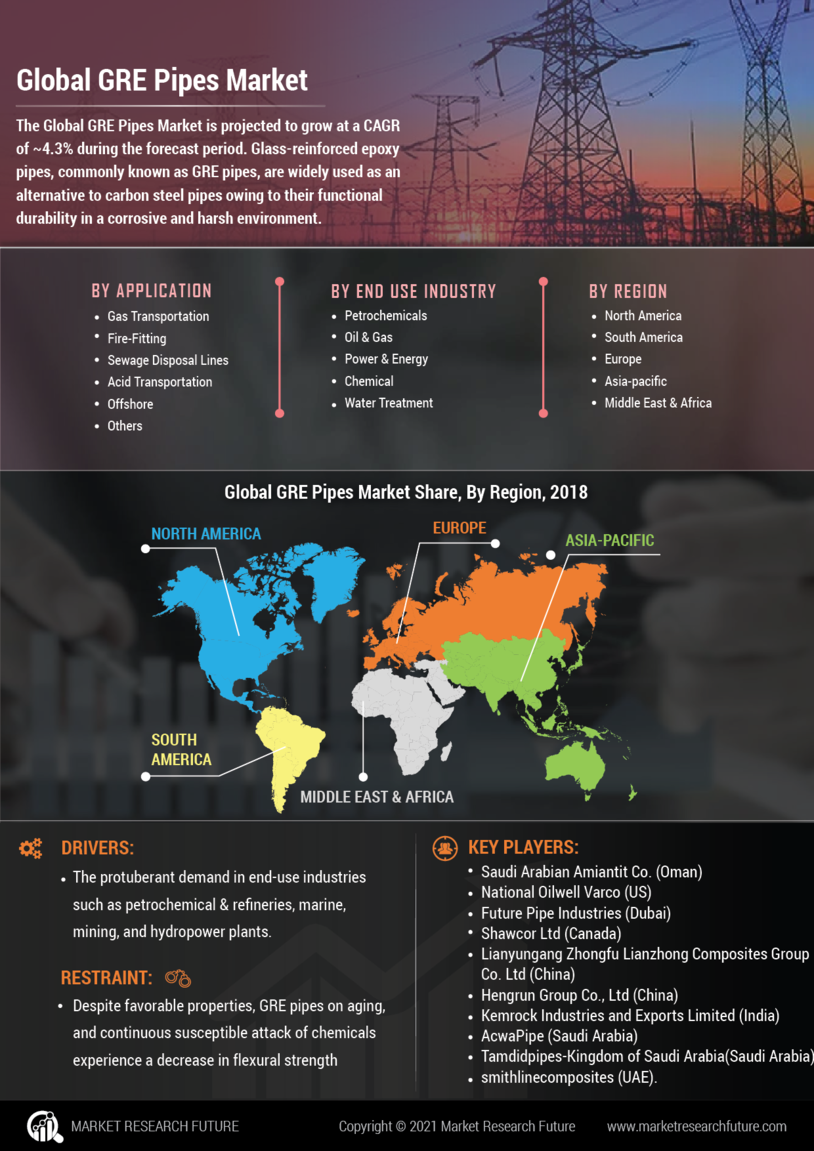 The global GRE pipes market is projected to grow USD 4.7 billion at a CAGR of ~4.30% during the forecast period. Glass-reinforced epoxy pipes, commonly known as GRE pipes, are widely used as an alternative to carbon steel pipes owing to their functional durability in a corrosive and harsh environment. GRE pipes are fabricated by discontinuous filament winding technique wherein fiberglass filaments, and amine-cured epoxy resins are processed in discontinuous winding machines. Due to their lightweight properties and high chemical resistance, these pipes are widely used for offshore applications such as transportation of brine water, dredging, and gas transportation. Additionally, they are used in potable water transmission, fire mains, piping in power plants, chemical plants, downhole tubing, and others. It is also used in other industrial applications such as sanitary sewers, firefighting lines, gas transportation, water injection and tubing, and casing. The prime factors expected to drive the market growth are the protuberant demand in end-use industries such as petrochemical & refineries, marine, mining, and hydropower plants. Increase in industrial output across the developing economies of the Asia Pacific such as China, India, and South Korea along with rising construction investments specifically in Middle East & Africa is anticipated to bolster market growth in the coming years. The industrial output in China increased by 6.3% in 2018, whereas a similar trend has been observed in India with a growth rate of 3.4% in the first half of 2019. Furthermore, GRE pipes exhibit high safety factor, resistance to surge pressure, and excellent hydraulic efficiency facilitating its usage across various pipelines in different industries. Also, its remunerative benefits such as longer service life and virtually zero maintenance post-installation are other factors driving demand. Smooth interiors propelling improved liquid flow in comparison to conventional pipes coupled with suitability for underground and above ground fire water and gas systems are providing numerous opportunities to market participants. However, despite favorable properties, GRE pipes on aging, and continuous susceptible attack of chemicals experience a decrease in flexural strength and microcrack development. Additionally, due to their brittle nature, these pipes are more vulnerable to impact damage, resulting in material failure. These factors are expected to hamper the market growth and challenge market players.Global GRE Pipes Market Share Region 2018 (%) Source: MRFR Analysis 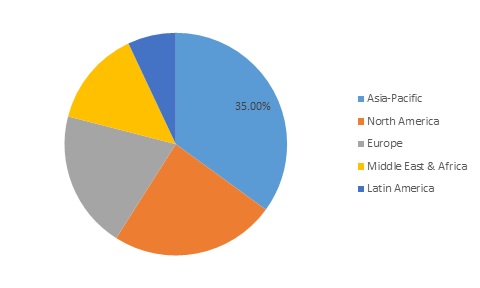 The global GRE pipes market has been analyzed for five major regions, namely—North America, Asia-Pacific, Europe, Latin America, and the Middle East & Africa. The Asia-Pacific market accounted for the largest market share in 2018 and is projected to register highest CAGR during the forecast period owing to the growth in demand for GRE pipes in end-use industries such as oil & gas, chemical, and process industries. Growing industrialization and increased spending in the power generation sector are some of the critical drivers for GRE pipes market in the region. Moreover, the rapidly increasing applications of GRE pipes in water treatment industries such as in water transmission, water desalination, sewage disposal lines, and others are further expected to drive the demand in the region. Thus, considering the healthy growth of GRE pipes in various applications in countries like India, China, and Southeast Asian countries is expected to offer lucrative market growth. The North American market accounted for a considerable market share in 2018 owing to the presence of well-established end-use industries such as water treatment plants and oil & gas. Canada is likely to grow with a significant CAGR in the foreseen period owing to favorable infrastructure for oil transportation and availability of abundant water for shale gas extraction. The European region is also expected to showcase moderate growth during the forecast period due to the shift in preference towards GRE pipes over PVC pipes in major industrial sectors. Also, the growing demand for GRE pipes in petrochemical industries in the region can be attributed to the demand. Middle East & Africa is home to some of the major oil & gas companies such as Petronas, SABIC, and Petrobras. The region accounts for over 30% of global crude oil production and has over 40% of proven oil reserves. Thus, the outlook for GRE pipes market is expected to be positively driven by continuous investment and burgeoning oil& gas demand as a fuel. Countries like the UAE and Saudi Arabia are focusing heavily on the tourism sector, which is expected to benefit the sewage & wastewater treatment industry. This, in turn, will positively influence the GRE pipes to demand over the forecast period. The Latin American market is expected to show a moderate CAGR in the forecast period.

At what CAGR is the GRE pipes market expected to grow over the forecast period?

Which region will have the largest share in the GRE pipes market?

Asia Pacific is predicted to have the largest share in the GRE pipes market.

Who are the key competitors in the GRE pipes market?

What are the key factors driving the GRE pipes market growth?