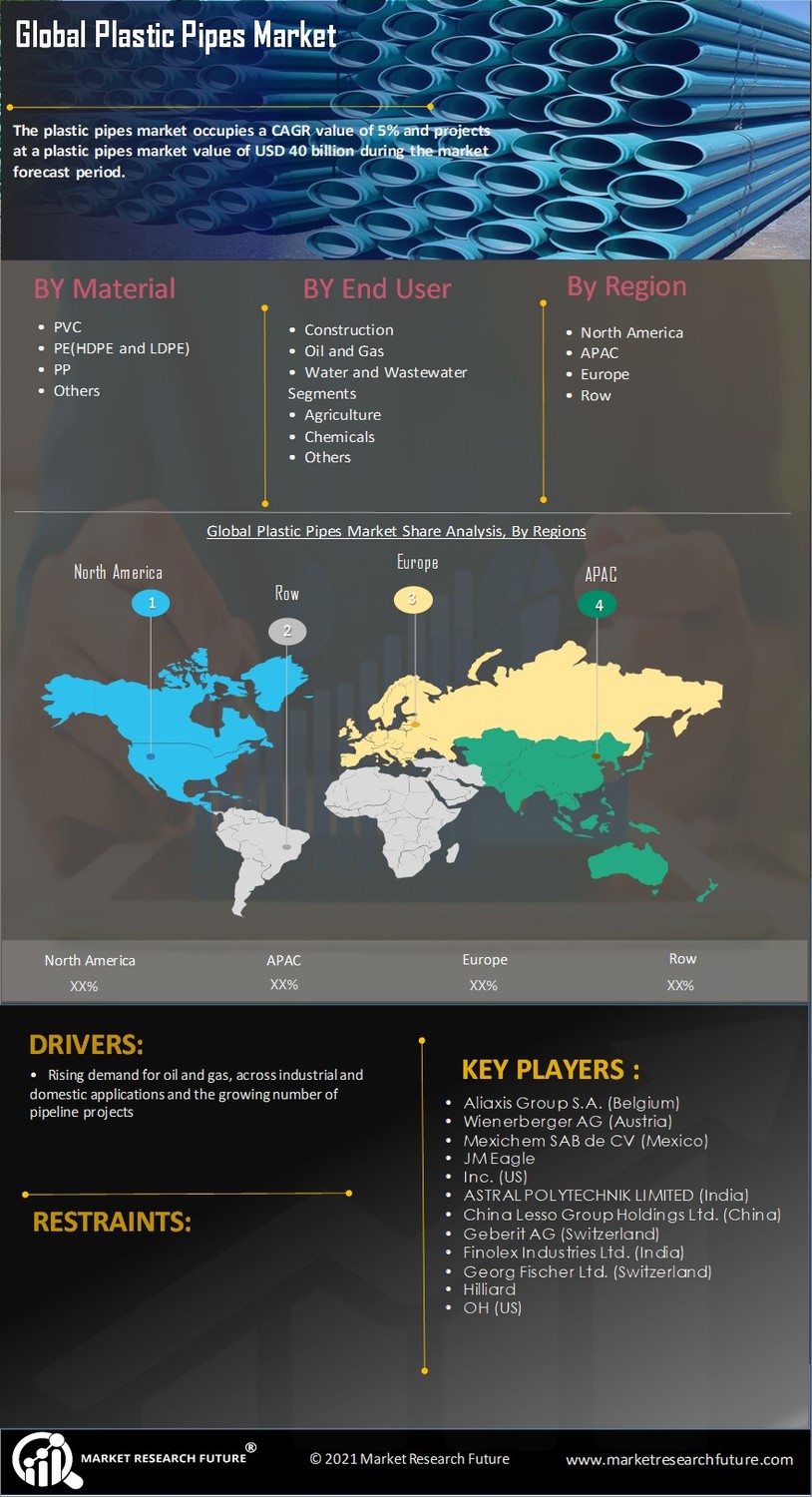 The construction along with oil and gas segments occupies a major market share by the end of the market forecast period. The water and the wastewater units occupy a high growth rate due to the upcoming new pipeline projects and the advanced upgrades. From PVC type market analysis it was marked that the plastic was made up of the materials like PVC resin, stabilizers, plasticizers, some of the lubricants, pigment base, and many more. The rise in demand for pipes in industries and developmental infrastructures and the growth of economies steers up the market size and the market demand. Some of the regulatory bodies have imposed certain guidelines for the usage of PVC material in a number of countries for controlling and safeguarding the interest of the users. The eastern region of India is the main important region that drives up the use of PVC pipes thus owing to the increase in usage and cultivation of tea. Exponential growth in this region upsurges the demand of the plastic pipes industry.

The outbreak of COVID throughout the world had a great impact on consumer behavior. A change in consumer behavior was marked and moreover, the analysts of the plastic pipe market have started tracking the evolving situation of the market. COVID impacted the growing situation of the market and their analysis. Economic conditions of the market have deteriorated during this period. PVC manufacturing units suffered difficulties in manufacturing as a labor shortage in the units took place.

Some of the major market players operating in the market are

Globally, the plastics market is very much competitive as it has the majority of market players. Moreover, these players have adopted various plastics strategies which have helped in the expansion of the market and where they have occupied the majority of market shares. Their strategies include the adoption of new technology for the discovery of new products. Their development has taken place due to the rise in the usage of advanced materials. They have merged with each other and have developed partnerships and have also collaborated with other key players.

The growth in demand for the oil and gas segment across the industrial and home applications along with the rise in demand for the pipeline projects steers up the plastic pipes market growth. The rise in the setup of various end-user industries has brought up the expansion of plastic pipe market size. Its huge benefits make these plastic pipes more suitable to be used in end-user industries. It has numerous properties like it is safe, cost-effective, highly durable, and is highly recyclable. These plastic pipes have been used for the transportation of drinking water as it is the safest option that provides resistance against corrosion. An increase in demand in irrigation sectors acts as a driving force towards the rise in plastic pipe market size.

It has maximum advantages like it is cost-effective, lightweight, and is very much resistant to corrosion which raises the opportunities for the rise in market growth. Besides it, these pipes have insulation properties that promote the transportation of cold water where less reduction of heat takes place. These plastic pipes thus are extensively used in oil and gas units, water and wastewater sectors, chemicals along agriculture fields increase the chances for the rise of plastic pipes market growth.

It resembles the gain in market value and the high CAGR so obtained during the market forecast period. During the base year, maximum growth opportunities were marked which helped in the growth development of the plastic pipes industry.

Availability of some of the substitutes like HDPE and ABS acts as a hampering force to the market growth. An increase in toxicity of the plastic pipes especially pipes made up of PVC restricts the market size and market growth.

Technology led to the advancement in the process of recyclability where plastic pipes emerged to be the best substitute for GI and other pipes. Technology led to the discovery of CPVC and HDPE pipes where it has been used for industrial and construction sectors. Acceptance for the usage of PVC pipes is in huge demand due to them being lightweight and easy to use. Technology has played a great role where it has been found that CPVC pipes are used as the best replacement for PFR pipes and DWC pipes.

Globally, the plastic pipe market has been extended to the regions of North America, Europe, Asia-Pacific, and some of the regions present in the world. It was marked that the North American region covered the largest portion of market share and still dominates till the market forecast period. Some of the regions of the United States covered huge market share and occupied a huge market value. Some of the Asia Pacific regions extend towards the region of North America where it witnesses carrying out agricultural and some industrial activities. This region also carries out the exploration works of both oil and gas. This helps in driving up the market demand for the use of plastic pipes especially in the region of Asia Pacific.

The report majorly focuses on the plastic pipe industry market scenario and its type. The report gives extensive details about the present marketing trends so adopted, the future estimations are so done and the market dynamics operating in the market. It makes a good report analysis about the prevailing opportunities during the market forecast period. It makes a good report analysis about the market segmentation and the applications of the PVC pipes. It gives detailed information about the new and advanced materials so used for gaining prominence in the upcoming years. The market players give good analysis about the marketing strategies and the market framework so conducted. The report gives a good market outlook and the recent development taking place in it as per the latest technology. From the segment overview, it was found that PVC has high growth potential as compared to other such segments.

What is the projected market size & growth rate of the plastic pipes market?

Which region would lead the global plastic pipes market?

Which country would dominate the North American plastic pipes market?

The US would dominate the North American plastic pipes market.

Name the players involved in the plastic pipes market.

Give details from the report overview?

It summarises the parent PVC market which manufactures the plastic pipes. It elaborates on the growth potentials and their impact on future perspectives.