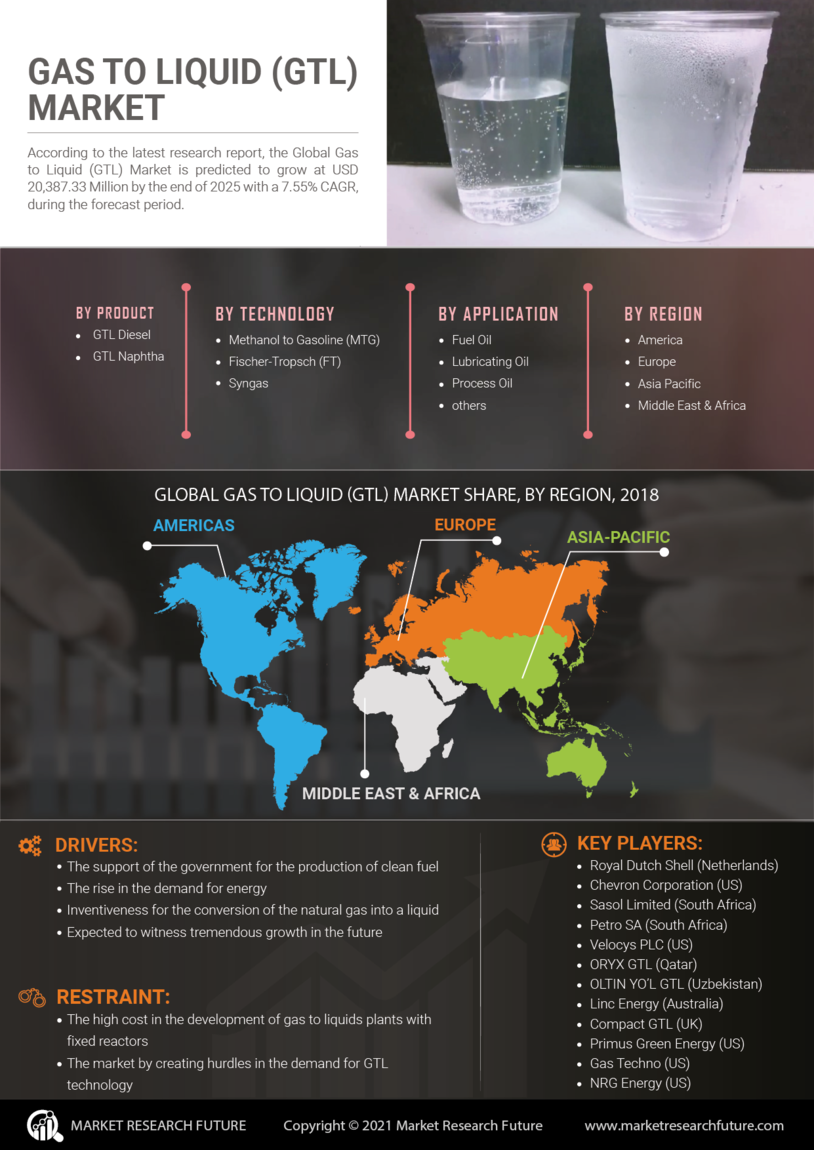 Gas to liquid (GTL) is a refinery process where the natural gas is converted into the longest chain hydrocarbon such as diesel fuel or gasoline. This process is generally used to convert methane-rich gases into high-quality liquid synthetic fuels. The rising concerns for the depletion of fossil fuel and the increase in the demand for alternative sources of energy are predicted to boost the growth of the gas to liquid (GTL) market over the forecast period.

The global gas to liquid (GTL) market value was around USD 8.4 Billion in the year 2014 and it is predicted to grow at a CAGR of 6.5% from 2015 to 2022. The rise in the demand for the Fischer tropsch (FT) in order to monetize the fossil fuels which are about to extinct or inaccessible for use is likely to raise the demand for the technology. Scarcity of the natural gases and the rise in the demand from the end-use industry around the world are predicted to influence alternative energy providers. The gas to liquid (GTL) market is divided into GTL diesel and GTL naphtha, depending on the quality, the GTL diesel segmented is dominating the market and GTL naphtha holds the second-largest position in the market, it is basically an alternative of feedstock for the chemical manufacturing which helps to make the plastic building blocks. However, the conversion of methane-rich gases into the liquid synthetic fuel is likely to boost the technology growth of the gas-to-liquid (GTL) market.

There are several strategic approaches including mergers & acquisitions, collaboration, launches of new technology, and expansion in the global gas to liquid (GTL) market trends. The leading players of the industry are making development activities and strategic investments in the market and they are also focusing on their expansion plans. The leading key players of the market are focusing on investing in the plantation of the gas to liquid (GTL) plants.

Moreover, the decline in the demand for diesel, fuel, gasoline, and kerosene due to the complete lockdown in the residential, commercial, transportation, and industrial places has hampered the growth of the gas to liquid (GTL) market.


The availability of various products that offer superior combustion properties and leaves a low amount of carbon products as compared to crude oil products is considered as the major driving factor for the growth of the global gas to liquid (GTL) market. The reduction in carbon discharge is the prime goal of various nations in order to amelioration of the ozone layer and other global warming problems. Thus the gas to liquid (GTL) market size is expected to witness tremendous growth in the future.

Furthermost, the support of the government for the production of clean fuel, the rise in the demand for energy, and inventiveness for the conversion of the natural gas into a liquid are some other major factor that is adding fuel to the growth of the global gas to liquid (GTL) market.


The rise in the consumption of natural gas in developing countries such as Japan, India, and china by replacing conventional reactors with small-sized microchannel reactors can create various opportunities for the gas to liquid (GTL) market. From the past few years, many big companies have taken the initiative of developing synthetic fuels from natural gases by using liquid technology.

According to the reports of the World Bank, about 150 billion cubic meters of natural gas which is freely available in nature can be transfigured into functional liquid fuels by using gas to liquid technologies.


The high cost in the development of gas to liquids plants with fixed reactors and the size constraints of slurry based are likely to restraints the gas to liquid (GTL) market growth. The execution of strict rules for the usage of clean energy generation resources is also a major factor restraining the growth of the market by creating hurdles in the demand for GTL technology.

The rise in the demand for the installation of the low carbon energy generation in order to control the rise in the cordon dioxide in the atmosphere along with that the methods of tackling the rise in the temperature problem may put a tremendous effect on the gas to liquid (GTL) market outlook.


The gas to liquid (GTL) supply a means to monetize small gas reserves or otherwise, it would endure stranded due to their low volumes. In the regions where there is no availability of supporting pipeline infrastructure in the area, the major challenges arise here while monetizing small gas reserves discoveries in these regions. In such cases, the construction of new pipelines for the transportation of low volumes of gases is completely inefficient.

According to the market reports, the valuation of the gas to liquid (GTL) market is expected to reach USD 20,387.33 million by the end of 2025. The Middle East and Africa are predicted to be prominent regions for the gas to liquid (GTL) market. In this region, Qatar is predicted to hold the maximum market share as Qatar is a global leader in GTL technologies and it also has the low GTL operational facilities in this region.

According to the market research report, the global gas to liquid (GTL) market has been segmented on the basis of product, application, and region. Based on the application, the global gas to liquid (GTL) market is segmented on the basis of fuel oil, process oil, lubricating oil, and others. Fuel oil is used in the apparatus in generating heat and energy and in the boilers in the manufacturing operation. Fuel oil, expected to hold the largest share in the global gas to liquid (GTL) market share because it helps to improvise the performance and reliability of the entire boiler system. On the other hand, lubricating oil is expected to hold the second-largest share in the market due to its marvelous oxidation stability and low viscosity. It also helps in the zero generation of sulfur and nitrogen at a low temperature.

Gas to liquid (GTL) process oils are used in technical industries and also in a number of chemicals, it can be used as an aid to processing or as raw materials. It also has thermal stability along with outstanding light.

Based on the technology, the global gas to liquid (GTL) market is segmented into Fischer-tropsch (FT), methanol to gasoline (MTG), and syngas. The Fischer – tropsch (FT) is predicted to hold a magnificent share in the market over the forecast period.

The market is segmented on the basis of the product, application, and region. The global gas to liquid (GTL) market is expected to witness decent growth during the forecast period.


Based on the application, the market is segmented into fuel oil, process oil, lubricating oil and others


Based on the propulsion types, the market is segmented into three types into Fischer-tropsch (FT), methanol to gasoline (MTG), and syngas.

On the other hand, Middle East Africa is expected to maintain considerable growth in the market in terms of revenue in the upcoming period. The majority of the GTL plants are located in Qatar, Nigeria, South Africa, and Mozambique in this region. Qatar is considered as one of the leading leaders in the global gas to liquid (GTL) market industry.

Who are the game changers influencing the growth of the gas to liquid market?

What are some of the trends that can penetrate the market in the coming years?

Which market application has the potential to gain the top spot in the market.

Fuel Oil accounted for the largest market share, since it helps enhance the reliability and the performance of the entire boiler system, from the storage tank right to the chimney.

By the end of the forecast period, the market size can expand to what valuation?

The Global Gas to Liquid (GTL) Market is expected to grow at USD 20,387.33 million by the end of the forecast period.

Which region can seize the largest share in the market and what factors can help it do so in the near future?

Middle-East & Africa is estimated to be a prominent region for the GTL market. This is due to the technological expertise of vendors in constructing and operating GTL plants and the abundant availability of natural gas in the region.