The surging need to reduce carbon emissions from gasoline in the transportation and automotive sector will bolster the use of ethanol as a bio-based additive in the next few years. North America, along with Central & South America and Europe remains a leading consumer of the product. However, several emerging countries in the Asia Pacific including India, South Korea, and China, are top crude oil importers. Ethyl alcohol’s extensive use as a blending additive benefits these economies to a large extent, in terms of higher energy security as well as efficiency of motor vehicles.

Ethanol is produced using biobased or renewable raw material feedstock. The tyes of feedstock are sugar-based, cellulosic, and starch-based. Starch-based category has taken the lead in the worldwide market, and will experience growth at a rate of 5.8% from 2020 to 2027. Starch-based items are produced using raw materials that include wheat, corn, cassava and barley. Majority of these products contain significant starch content and help bring down greenhouse gas emissions to a huge extent.

However, it is anticipated that cassava’s use as a suitable feedstock can garner importance in the coming years in emerging countries such as Thailand and China, due to its rich starch content as well as the ability to facilitate the production of ethyl alcohol containing high octane rating as well as excellent anti-knocking characteristics. 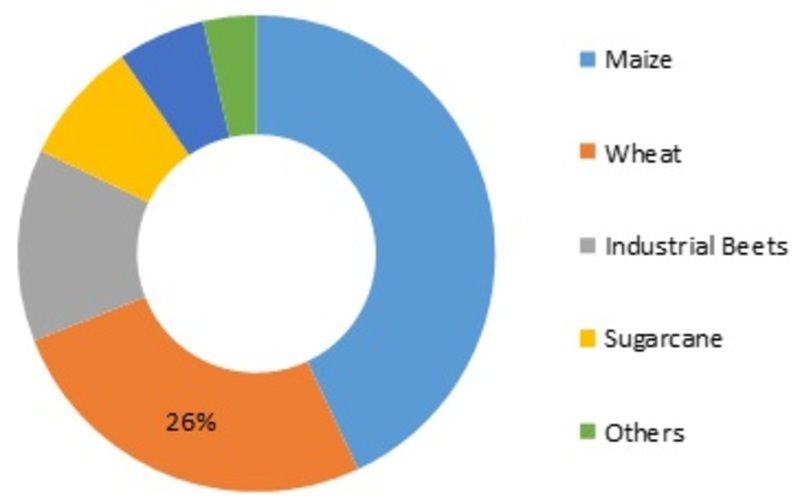 The global fuel-ethanol market has been segmented into the source, raw material, application, and region.

Based on the source, the global fuel-ethanol market has been categorized as synthetic and natural.

By raw material, the global fuel-ethanol market has been classified as maize, wheat, industrial beets, sugarcane, cereals & starch, and others.

North America accounted for the largest market share of the global fuel-ethanol market in 2018 and is expected to show a similar trend during the forecast period. The established automotive industry and strict ethanol blending mandates in the US are propelling the market growth in the region. For instance, the US currently has 10% ethanol blending mandate for all vehicles; 15% ethanol blending mandate for cars and light pickup trucks with the model year of 2007 or later; and 85% blending mandate only for flexible-fuel cars, and for vehicles sold in Midwest. The current ethanol blending mandate in Canada is 5% and has put forth a target of 10% by the year 2020. Canada signed the Paris Agreement in 2016 and announced its futuristic objectives of minimizing emissions by nearly 30%, by the end of 2030. This regulatory scenario is considered to boost the use of low carbon intensity fuels and is ultimate to impact ethyl alcohol consumption in the future.

Latin America was the second-largest market for fuel-ethanol in 2018. Stable production of flexible fuel vehicles in Brazil and Argentina is likely to drive the demand for bioethanol fuel in the region. Also, the current ethanol blending mandate in Brazil is 18%. The current blending mandates in other Latin American countries are Jamaica 10%, Paraguay 25%, Panama 10%, Peru 7.8%, Colombia 10%, Mexico 5.8%, Chile 5%, and Costa Rica 7%.

The market in Europe is relatively mature and is expected to show steady growth during the coming years. The markets in the Middle East and Africa held the least market share of the global market and is likely to show slow growth due to flexible regulatory policies and weak economic growth.

What was the fuel ethanol market valuation in 2030?

What would be the CAGR of the fuel ethanol market for the forecast period involving 2021-2030?

What would trigger growth for the fuel ethanol market?

As a substitute for fossil fuel, this would gain maximum attention.

What could prevent the fuel ethanol market growth?

The food vs fuel debate can hold back the fuel ethanol market growth.

What are the applications of the fuel ethanol market study?