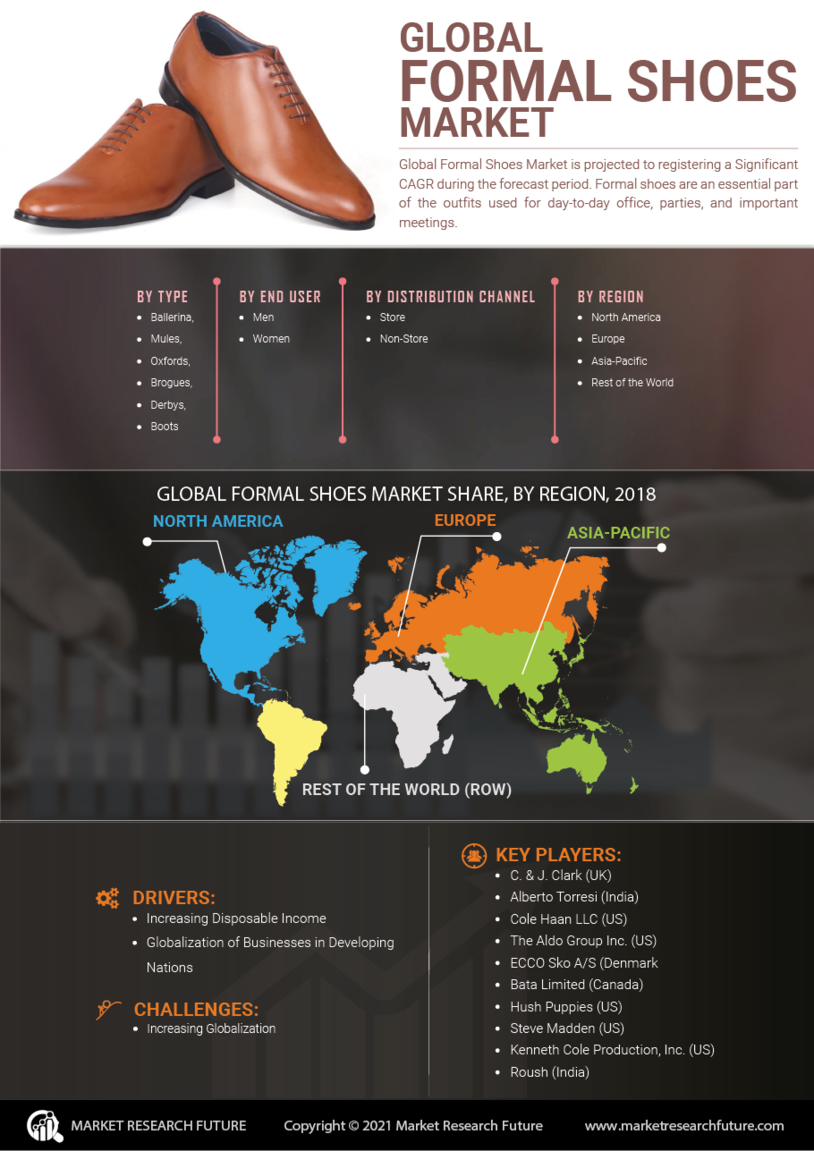 Formal Shoes Market is expected to grow at 4.85% CAGR from 2020 to 2030. Formal shoes give a total look to the proper outfits. Assortment of choices in conventional shoes is accessible for various events like gatherings, sports, easygoing occasions, and others. Formal shoes have been classified in various styles like Derby, brogue, slipper, boots, loafers, etc. These shoes give a quite formal look to the clothing.

Formal shoes have seen conspicuous development in the new years, as they are incredibly agreeable and give a decent design articulation even in proper looks. The greater parts of the conventional shoes are made of cowhide. Oxfords and Monk shoes have acquired fame because of their style and solace. Moreover, Brogues are likewise in pattern, particularly among the more youthful populace.

The Oxford shoe section represented 25% of worldwide men formal shoe piece of the pie in 2015, trailed by the derby shoe type fragment. Also, the boots shoe type fragment enrolled huge development in 2015 and is expected to develop at a CAGR of 7.1% during the figure time frame.

The formal shoes market in the creating economies is pushed by magnified creation and deals of formal shoes in China and other Asian nations. There are additionally expanded imports from numerous Asia-Pacific nations, for example, China, Indonesia, Vietnam, and India, to Europe and North America that upgraded the income on exemplary oxfords, trendy brogue, and loafers universally.

COVID-19 is an exceptional worldwide health crisis that has impacted almost every industry, and the drawn-out impacts are projected to affect business development during the estimated time frame. Our continuous examination enhances our exploration system to guarantee the incorporation of basic COVID-19 issues and expected ways ahead.

The bits of knowledge on COVID-19 thinking about the progressions in buyer conduct and request, buying designs, re-directing of the store network, elements of current market influences, and the critical mediations of state-run administrations. The refreshed review gives bits of knowledge, investigation, assessments, and conjectures, considering the COVID-19 effect available.

In conversion with the rising impact of web-based media and the flourishing style industry, fast urbanization addresses one of the essential elements inducing the worldwide extravagance footwear market development. Besides, the developing inclination for the top-of-the-line design brands as a superficial point of interest likewise affects the deals of carefully assembled extravagance footwear.

A few driving brands are acquainting a wide item range to grow their current shopper base. In accordance with this, they are going into vital organizations and coalitions with different producers to offer redid formal extravagance footwear with a wide scope of choices in material, plan, shading, and size.

Aside from this, because of the abrupt spread of the COVID-19 and the execution of lockdown limitations, driving players are moving their concentration from disconnected dissemination channels to online stages.

Besides, expanding mindfulness about the natural effect of footwear is empowering producers to take on manageable materials to foster biological and reasonable extravagance footwear. Such advancements, alongside forceful special exercises, are expected to fortify the development of the market before long.

The Formal Shoes Market has been fragmented depending on the type, end-client, circulation channel, and locale.

By type, the market is sectioned into a ballet dancer, donkeys, oxfords, brogues, derbies, boots, and others.

By end-client, the market is sectioned into men and ladies.

The worldwide proper shoe market has been ordered based on appropriation channel into store-based and non-store-based.

The worldwide market has been investigated for four key areas—North America, Europe, Asia-Pacific, and the Rest of the World. The North American conventional shoe market has additionally been portioned into the US, Canada, and Mexico.

The European proper shoe industry has been named Germany, France, Italy, the UK, Spain, Russia, and the Rest of Europe.

Regional development in Formal Shoes Market size and expanding the number of brands alongside socio-cultural factors, for example, advancing style because of culturally diverse trade, keep on driving the development of footwear in Europe. On account of Asia-Pacific, globalization and labor force development are relied upon to move the market with the most elevated development rate during the gauge time frame.

Formal Shoes Market analysis referred that formal shoes are a fundamental piece of the outfits utilized for everyday office, parties, and significant gatherings. For the most part, they are produced using cowhide like grain, long grain, calfskin, and different materials. Formal Shoes Market is relied upon to develop at Significant CAGR from 2019 to 2023 according to MRFR Analysis.

Formal shoes have acquired a foothold during the last decade due to expanding extra cash and globalization of organizations in emerging countries like China, India, and Brazil.

Additionally, formal shoes returned from the brief stoppage with the assistance of working on material use and more accentuation on solace and style. Aside from oxfords and derbies, boots of various sorts, for example, desert and chukka, have been acquiring prevalence.

It has been seen that a decent appearance and clean shoes consistently have a decent effect, particularly on proper occasions. Men's conventional shoe, otherwise called dress shoe, is one of the significant office wear pieces.

Formal Shoes Market trend gives a total look to conventional outfits. Assortment of choices in proper shoes is accessible for various events like gatherings, sports, relaxed occasions, and others. Formal shoes have been arranged in various Derby, brogue, sandal, boots, loafers, etc. These shoes give a quite formal look to the clothing.

In 2018, KIZIK design, a luxury footwear brand, announced the launch of its patented hands-free technology that offers automatic fit to the wearer. The shoes come without shoelaces, and when worn, the technology ensures that shoes are flexibly opened to let the foot go in without the involvement of the hands.