Environmental rules encourage preventative measures to avoid water body damage, and one of the primary drivers driving the market is the use of eco-friendly fluid loss control additives for drilling operations in water-based muds. However, rising demand for electric vehicles reduces crude oil consumption, acting as a market restraint. As a result, because electric vehicles do not require crude oil-based fuels, the market for fluid loss additives may be stifled. On the other hand, the market's growth is hampered by the rising demand for electric vehicles and their negative environmental impact. 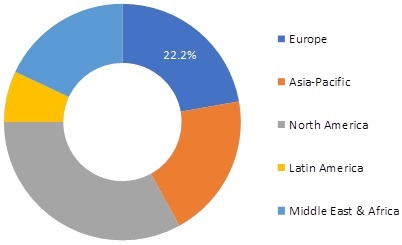 North America held the largest share of the global fluid loss additives market in 2018 and is expected to be the dominant regional market during the forecast period. The demand for fluid loss additives in the region is growing at a significant rate owing to the presence of prominent market players in the region and increase in the drilling operations and well intervention activities such as slickline, wireline, pumping or coiled tubing.

North America is followed by Europe, which is projected to hold the second-largest share of the global fluid loss additives market attributed to the presence of four of the six major oil & gas companies, namely BP p.l.c., Total, Eni SpA, and Royal Dutch Shell PLC.

The fluid loss additives market in Asia-Pacific is expected to witness healthy growth owing to rapid industrialization in the region, which has led to the growth of the oil & gas industry; China is the leading regional market. The presence of large-scale oil & gas producers such as Sinopec and China National Petroleum Corporation is projected to propel the demand for the product in China during the review period.

The growth of fluid loss additives market in the Middle East & Africa is attributed to the high production of petroleum derivatives in the GCC countries. However, the Latin American market for fluid loss additives is expected to witness sluggish growth during the review period.

The global fluid loss additives market has been segmented based on material type, product type, application, and region.

The global fluid loss additives market, by material type, has been divided into bentonite, barite, polyanionic cellulose (PAC), polyacrylamide (PAM), calcium carbonate, hydroxyethyl cellulose (HEC), latex, and others. Bentonite, barite, and PAC are the most widely used additives in drilling fluids. The PAC segment is expected to hold the largest share of the global market.

Drilling fluids, cement slurries, fracturing fluids, and completion fluids are the application segments of the global fluid loss additives market. Among these, the drilling fluids segment held the largest share of the global fluid loss additives market and is expected to be the dominant segment during the forecast period, owing to the rise in the drilling operations in North America and the Middle East & Africa.

Sep 2021 IsoBond is a cement system developed by Halliburton Company that reduces sustained casing pressure (SCP) at its source to create a barrier that reduces transition time, reduces fluid loss, and increases shear bonding. Unlike slurries, which are only meant to prevent fluid loss, the IsoBond cement technology eliminates SCP on all fronts. IsoBond reduces annular flow through cement and boosts anchoring force to the casing and formation by up to 40% compared to existing systems because of its short slurry transition time and rapid gel strength development. Because of the enhanced shear bonding, the cement sheath is more resistant to corrosive fluid deterioration.

What was the Fluid Loss Additives Market valuation in 2018?

What is the expected CAGR for the Fluid Loss Additives Market during the forecast period of 2019 to 2025?

Which material type would dominate the Fluid Loss Additives Market?

The polyanionic cellulose segment would dominate.

Which product type would command the Fluid Loss Additives Market?

The water-soluble type would command.

Which application would dominate the Fluid Loss Additives Market?

The drilling fluids segment would influence the market the most.