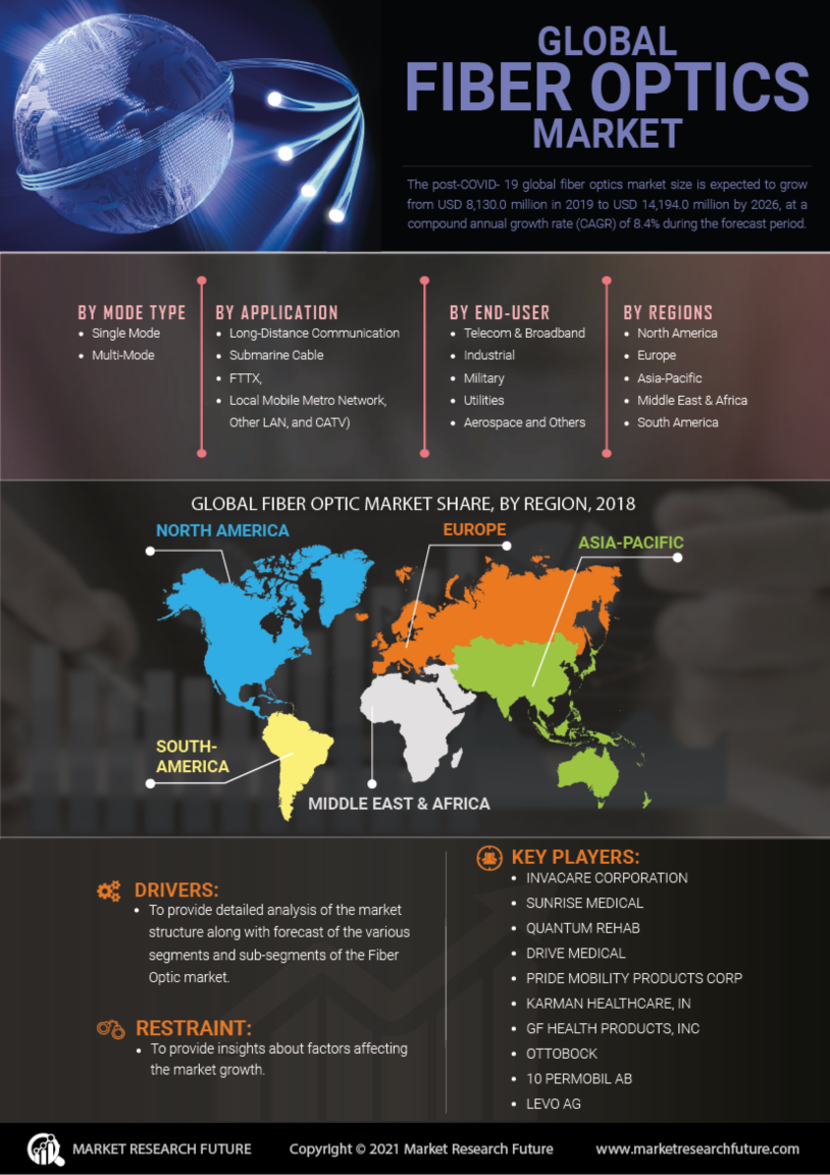 The fiber optics market is driven by factors that comprise rising demand for high-speed internet services and increasing use of FTTX networks.Additionally, the rising demand for fiber optic cables in the aerospace and automotive industries is opening new doors to opportune the industry players to innovate and expand their business to the next level. It is widely deployed across various end users, including telecom & broadband, industrial, military, utilities, and aerospace.

Based on mode type, the fiber optics market has been divided into single mode and multi-mode. Among these, the single mode segment dominated the market in 2019; it is expected to maintain its dominance throughout the forecast period at the higher CAGR of 8.9% during the forecast period. Single mode fiber is a vital part of broadband networks and is designed to transmit data over long distances. Thus, it is widely used in long-distance communication, higher bandwidth areas such as telecommunication, cable television companies and the education sector. Multi-mode fibers offer high bandwidths at high speed over medium distances.

There has been a rapid growth in the adoption of FTTX in European countries as fiber optic technology has become the medium of choice for various automotive applications. Based on end user, the fiber opticsmarket has been segmented into telecom & broadband, industrial, military, utilities, aerospace, and other uses. The telecom & broadband segment dominated the global fiber optics market in 2019; it is estimated to maintain its dominance throughout the forecast period.The rising demand for high-speed internet services has increased the use of fiber optics in the telecommunications & broadband market.

By region, the fiber optics market has been segmented into North America, Europe, Asia-Pacific, and South America, and the Middle East & Africa. Asia-Pacific dominated the fiber optics market in 2019 with a value of USD 2,878.4 million and is expected to reach USD 5,034.2 million in 2026 at a CAGR of 8.5%. However, the market in Middle East & Africa is estimated to witness the highest CAGR of 9.1% during the forecast period, 2020–2026.

Asia-Pacific accounted for the largest contributor to the fiber optics market. The regional market is divided intoChina, Japan, India, South Korea, Australia, New Zealand, and the rest of Asia-Pacific. According to MRFR analysis, increasing investments in network infrastructure development and rapid industrialization are driving the growth of the regional market.North America is the second contributor to the fiber opticsmarket. The regional market comprises the US, Canada, and Mexico. According to MRFR analysis, the US is expected to account for the highest market share, followed by Canada and Mexico.While the demand has increased in the other parts of the world, the overall market has matured due to a steady CAGR over the years.Some of the factors responsible for the market's growth include growing demand for high-speed internet services among end-use verticals, including the aerospace industry.Europe is expected to register steady growth in the fiber optics market during the forecast period owing to the rising adoption of FTTX networks and increasing demand for high-speed Internet services. Similar to North America, Europe’s fiber optics market has matured with a steady CAGR over the years.

At what CAGR is the global fiber optics market projected to grow in the forecast period (2020-2026)?

Global fiber optics market is projected to grow at approximately 8.4% CAGR during the assessment period (2020-2026).

How much is the global fiber optics market worth in the future?

The valuation of the global fiber optics market is estimated to increase to approximately USD 14,194.0 MN by the end of 2026.

What are the major tailwinds pushing the growth of the fiber optics market?

Emergence of 5G and advancements in other communication, IoT, and MEMS technologies are major tailwinds pushing the growth of the fiber optics market.

Who are the top players in the fiber optics market?

Which region is expected to hold the highest market share in the global fiber optics market?

Asia Pacific is expected to hold the highest market share in the global fiber optics market.

The Global Fiber Optics Market Is Projected To Grow At A Cagr Of 8.4% During The Forecast Period:...